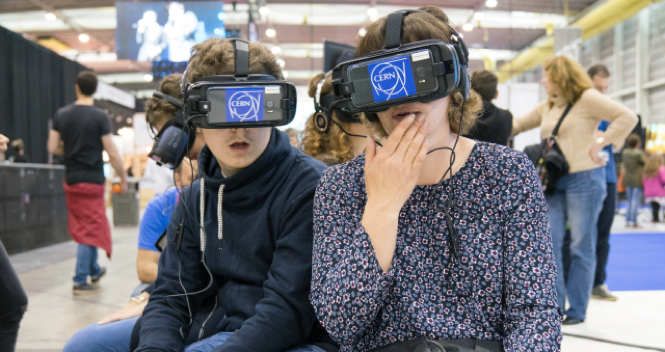 Thanks to the invention of the World Wide Web in 1989 at CERN, people all over the world are now more connected than ever before. At the moment, you are most likely reading this article on your computer or smartphone. Also, social media could not exist without the World Wide Web.

Since the World Wide Web was invented here, CERN was invited to the Royaume du Web event at Palexpo, a festival that gathered 10 500 YouTube enthusiasts who came to meet some of the most famous French-speaking stars of the internet. Big names such as Norman, Dear Caroline and Le Grand JD (who came to visit CERN a couple of months ago) were present. You may not have heard of them, but they gather millions of viewers.

This edition was the first of its kind with stage performances, Q&A-sessions, word-battles and even yoga on stage. In addition, various stands invited participants to discover web culture.

CERN explained the origins of the Web and proposed virtual-reality tours of its Data Centre and a game of football with protons. Over 1000 people visited CERN’s stand. This was the first time that CERN has used VR videos at a public event and it truly was an innovative way to show places people can only rarely visit.