Giovanni Passaleva takes the helm of the LHCb collaboration 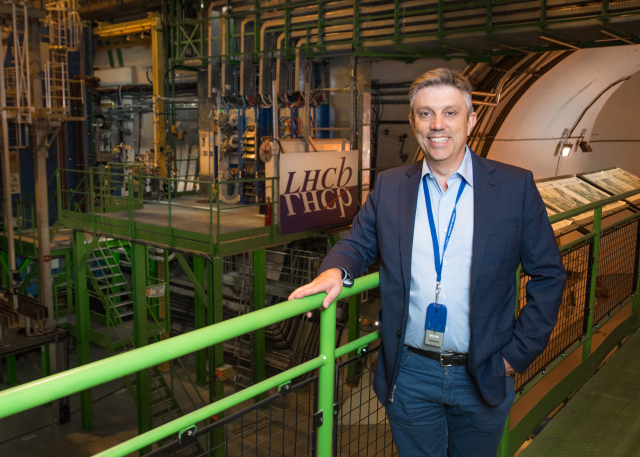 Giovanni Passaleva of the National Institute for Nuclear Physics (INFN) in Florence, Italy, is the new spokesperson of the LHCb experiment, taking over from Guy Wilkinson. During his three-year mandate, which started on 1 July 2017, he will lead a collaboration of about 1200 people from 72 physics institutes across the globe.

After graduating from a high school specialising in classical studies, Passaleva studied physics in Florence in the 1980s, when the discovery of the Z and W boson – for which the Italian physicist Carlo Rubbia was awarded the Nobel Prize in physics –raised a wave of enthusiasm in the Italian physics community. He completed his PhD on the L3 experiment at the Large Electron-Positron Collider (LEP) in 1994, working on the design and construction of the L3 vertex detector. He has been a member of the LHCb collaboration since 2000, when he started working on the construction and commissioning of the multi-wire proportional chambers for the LHCb muon system. After becoming the muon system project leader in 2008, in 2014 he became the LHCb Upgrade Detector Coordinator.

Passaleva takes the reins in a successful period for the collaboration, which in recent months has recorded many interesting results on flavour physics measurements. But it is also at a delicate historical moment, where the current experiment operations must be carried out alongside all the activities for the LHCb upgrade. “We are in a transition phase: after the R&D, we will be moving to construction, and the installation phase is approaching fast,” says Passaleva. “However, 2018 will still be a data-taking period: more data are needed to complete several fundamental physics analysis streams. Run 2 data are a gold mine that must be exploited fully,” he remarks. “Being forced to deal with both activities at the same time, the collaboration is in a ‘superposition of states’. High on my priority list is the optimisation of the organisation of the collaboration so that we will be prepared to take on all the challenges and opportunities that are facing us in the near future.”

The LHCb upgrade involves running at higher luminosity and a complete change of the trigger system and, as a consequence, a complete overhaul of the readout electronics and the redesign of several sub-detectors including innovative solutions. The new trigger will be fully software-based and will process all the data, which is sent 30 million times per second by the detector. “This improvement truly represents a paradigm shift for high-energy physics experiments, where the classical sequence of detector – trigger– data on tape – event reconstruction – analysis will be substituted with a detector – trigger - analysis approach,” he adds. “We are leading the way with a new method of doing particle physics, which will most probably be adopted by future high-luminosity experiments.”

“Many of the concepts developed for the LHCb upgrade can be tested with the existing experimental setup,” explains Passaleva. “It’s very rewarding seeing people excitedly proposing innovative ideas about how to apply new analysis methods, or developing and testing revolutionary trigger selection strategies,” he notes happily.

Passaleva pays tribute to his distinguished line of predecessors: “I’m taking over from Guy Wilkinson, who did a tremendous job in keeping the collaboration active and healthy. Together with Monica Pepe-Altarelli, they put in place many fruitful initiatives and I definitely want to embrace their managerial style. I am especially determined to maintain and further improve the ‘LHCb style’, where people with new ideas, especially young members of the collaboration, are provided with guidance and the necessary organisation to grow and succeed. I am counting very much on Chris Parkes, LHCb’s new deputy spokesperson, to help me in this formidable endeavor.”

Exciting times ahead: “In current high-energy physics, the development of modern computing techniques has become as crucial as building faster and more sensitive detectors. More efficient software algorithms are bound to become integral parts of future high-luminosity detectors, and I will work to make sure that LHCb becomes a pioneer in this field.”