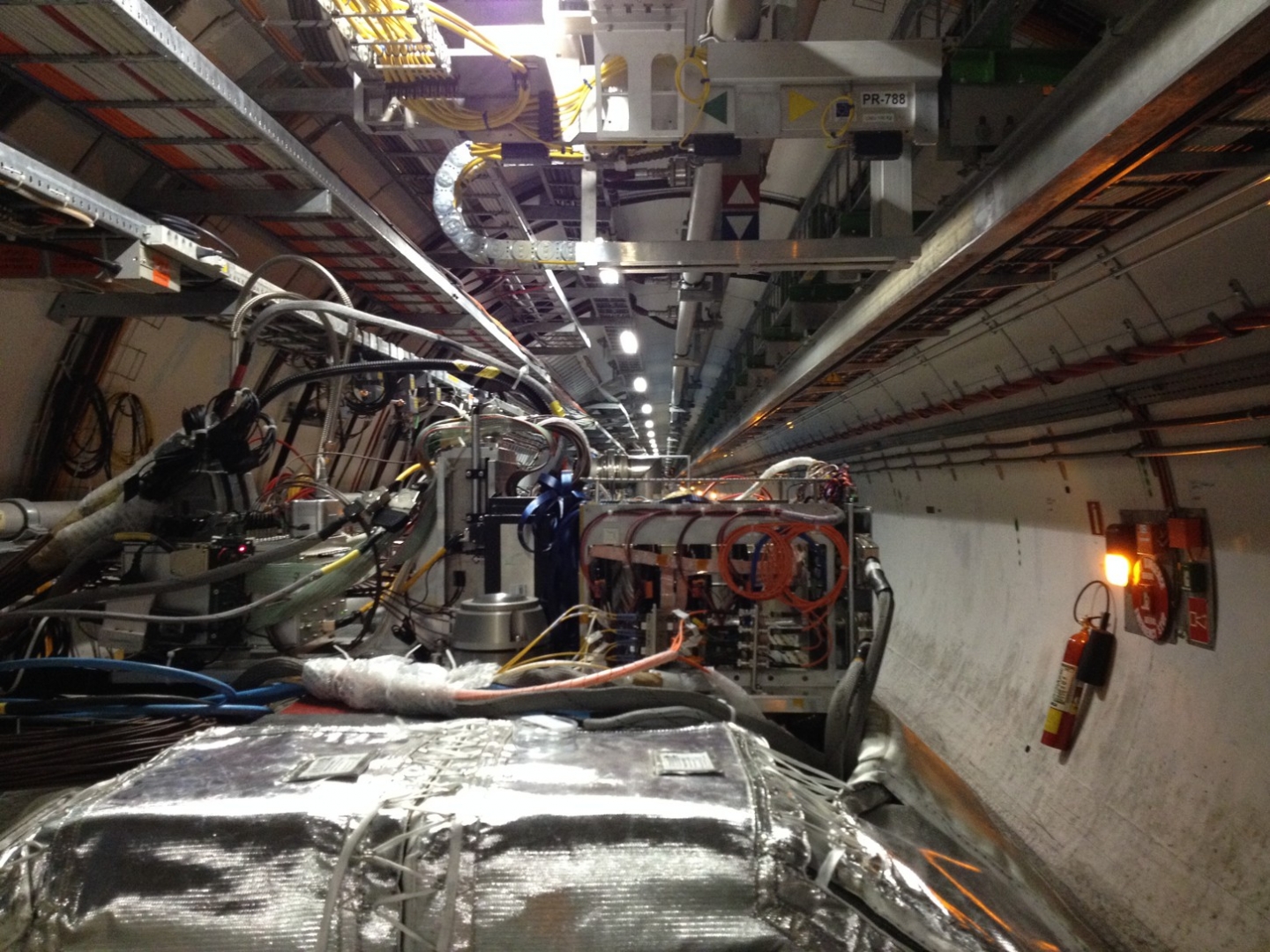 LHCf is the smallest of the six official LHC experiments. Each of the two detectors weighs only 40 kilograms and measures 30 cm long by 60 cm high and 10 cm wide. (Image: Lorenzo Bonechi/ CERN)

Roughly once a year, the smallest Large Hadron Collider (LHC) experiment, LHC-forward (LHCf), is taken out of its dedicated storage on the site near the ATLAS experiment, reinstalled in the LHC tunnel, and put to use investigating high-energy cosmic rays.

Whereas ATLAS and the three other main LHC experiments – CMS, ALICE and LHCb – study all particles produced in collisions no matter in which direction they fly out, LHCf measures the debris thrown in the ‘very forward’ direction.

These forward particles carry a large amount of the collision energy, and barely change their trajectories from the direction of the initial colliding beam.  This makes them ideal for understanding the development of showers of particles produced when high-energy cosmic rays strike the atmosphere.

“The idea behind the LHCf experiment is to help increase our learning about the nature of high-energy cosmic rays, by measuring and interpreting the properties of the secondary particles released when these cosmic rays collide with the Earth’s atmosphere,” explains Lorenzo Bonechi, who leads a team for the LHCf collaboration in Florence, Italy.

The experiment’s two detectors are installed 140 metres either side of the ATLAS collision point. They are not suitable to be used during normal LHC operations, and so have to wait until the machine is running with very few collisions –corresponding to a low luminosity . If the luminosity is too high, the larger number of forward, high-energy particles can heat the detector and cause permanent damage.

LHCf has been reinstalled near the ATLAS detector several times. This year, the experiment only installed one detector, which is taking data during this month’s heavy-ion run, where the LHC is colliding protons with lead ions. The asymmetrical nature of the collisions means one detector would be bombarded with the remnants of the lead nuclei and could be damaged.

The amount of debris which is thrown in the forward direction during collisions in the LHC  and the energy carried by these particles can be compared with the predictions of hadronic interaction models – sophisticated physics models that describe collisions between protons and nuclei and the list of particles produced in these interactions.

“Over previous runs we’ve found significant discrepancies between our data and the most advanced hadronic interaction models, which are used to model how cosmic rays shower down onto the earth when they interact with our atmosphere. LHCf is trying to find evidence that could help prove which of these models provide the most reliable description.  Now, scientists working in this field are making an effort to integrate our results into their models, and we might see a revolution in them in the near future,” says Bonechi.

The run with lead ions and protons began on 10 November 2016 with low intensity and low energy collisions (5.02 TeV) specifically for the ALICE detector to take measurements. But now it has ramped up to colliding the beams at 8.16 TeV, and LHCf has already collected several million particles and will continue its data taking in the coming days.