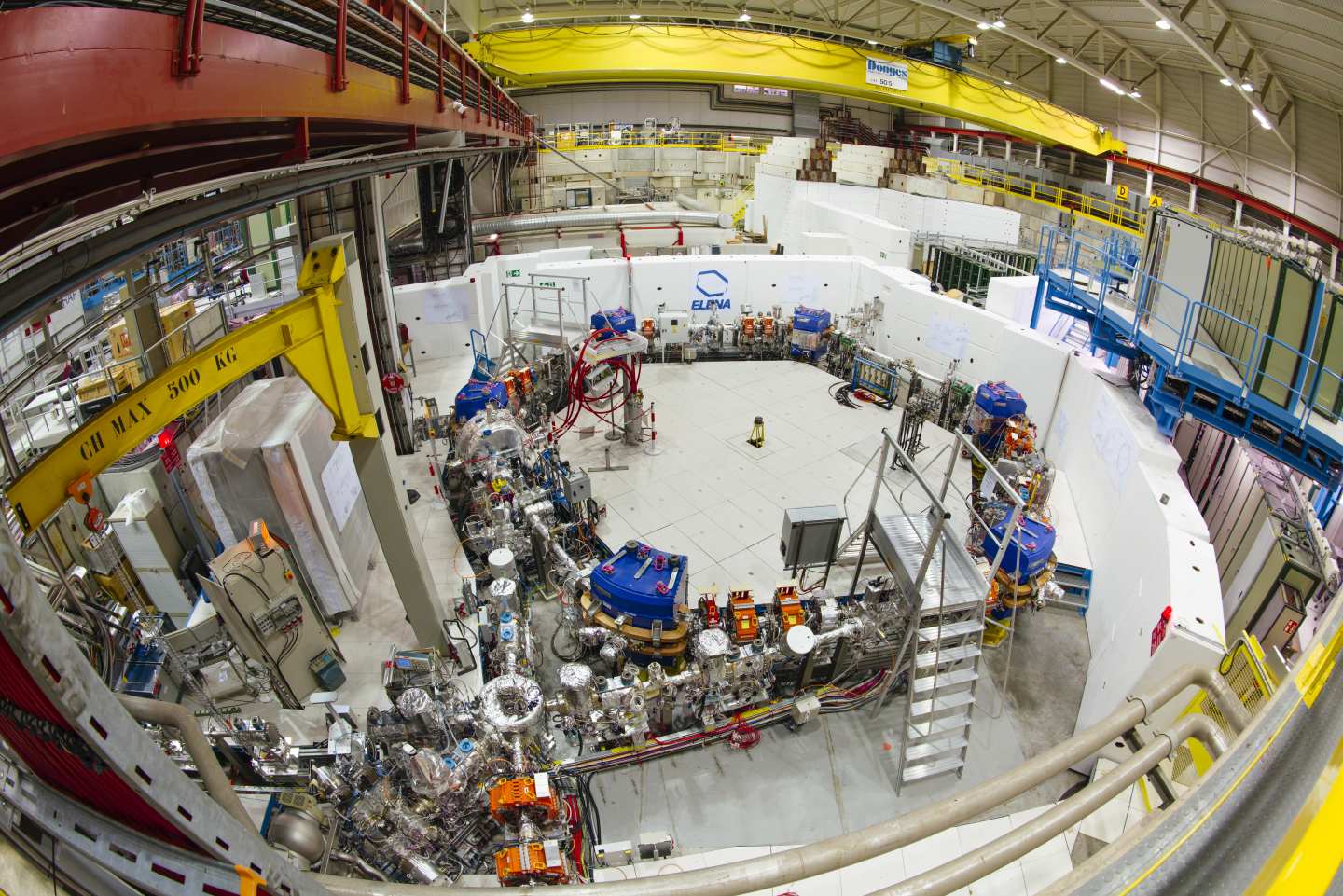 You could mistake ELENA for a miniature accelerator. But, unlike most accelerators, it’s housed in a hangar and you can take it all in in just a single glance. The biggest difference though, is that it doesn’t accelerate particles, but decelerates them.

The ELENA (Extra Low ENergy Antiproton) deceleration ring will be connected to the Antiproton Decelerator (AD), which has been in service since 2000. The AD is a unique facility that enables the study of antimatter.

Antimatter can be thought of as a mirror image of matter and it remains a mystery for physicists. For example, matter and antimatter should have been created in equal quantities at the time of the Big Bang— the event at the origin of our Universe. But antimatter seems to have disappeared from the Universe. Where it has gone is one of the many questions physicists are trying to solve with the AD machine.

The 182-metre-circumference ring decelerates antiprotons (the anti-particles of protons) to 5.3 MeV, the lowest energy possible in a machine of this size. The antiprotons are then sent to experiments where they are studied or used to produce atoms of antimatter. The slower the antiprotons (i.e. the less energy they have), the easier it is for the experiments to study or manipulate them.

And this is where ELENA comes in. Coupled with the AD, this small ring will slow the antiprotons down even further, reducing their energy by a factor of 50, from 5.3 MeV to just 0.1 MeV. In addition, the density of the beams will be improved. The experiments will be able to trap 10 to 100 times more antiprotons, improving efficiency and paving the way for new studies.

Decelerating beams is just as complicated as accelerating them. The slower the particles, the harder it is to control their trajectories. At low energy, beams are more sensitive to outside interference, such as the earth’s magnetic field. ELENA is therefore equipped with magnets that are optimised to operate with very weak fields. An electron cooling system concentrates and decelerates the beams.

Now that the components of the new decelerator have been installed, the teams have begun the first tests with beam.

“After five years of development and construction, this is a very important stage. We are going to continue the tests over the coming weeks to see if everything is working as planned,” explains Christian Carli, ELENA project leader. “GBAR, the first experiment to be connected to ELENA, should receive its first antiprotons in 2017.”

The other experiments will be connected during the second long shutdown of CERN’s accelerators in 2019-2020. ELENA will supply antiprotons to four experiments in parallel.

Several experiments are studying antimatter and its properties: ALPHA, ASACUSA, ATRAP and BASE. GBAR and AEGIS are working more specifically on the effect of gravity on antimatter.

You can read more about ELENA in the the CERN Courier.