Are you passionate about science? Then come along to the 2017 CERN Summer Student Webfest on the weekend of 21 to 23 July! 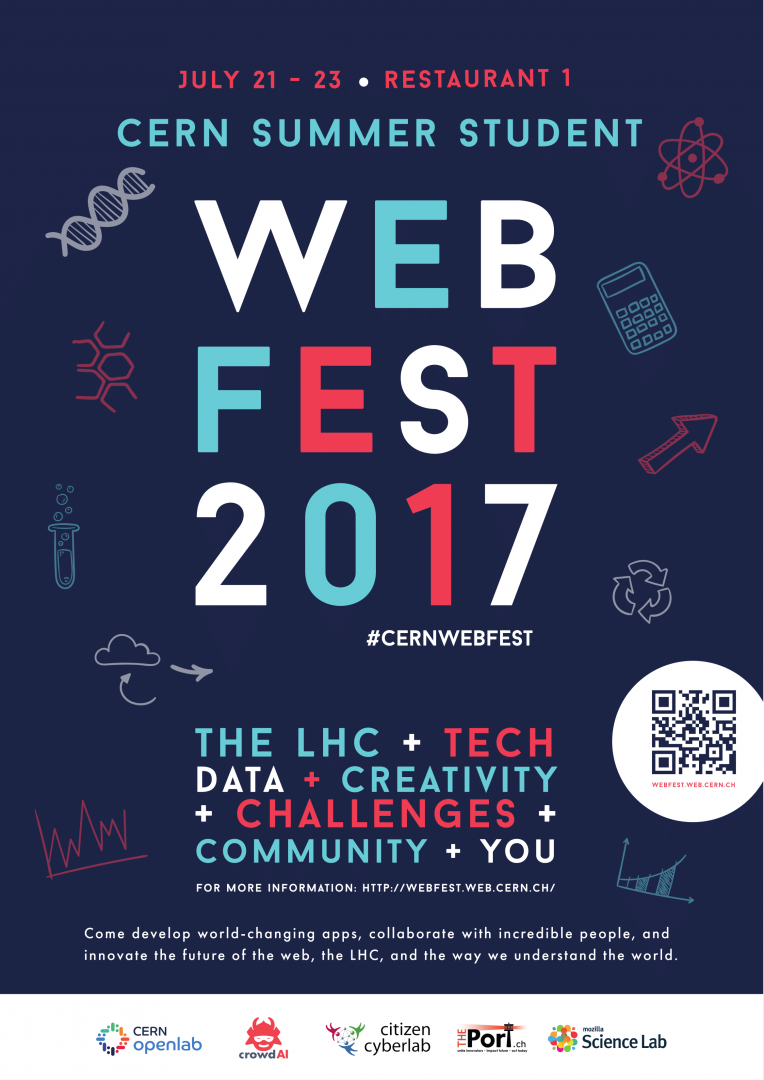 The webfest is a weekend of fun and creativity. Find out more on the event website.

Are you passionate about science? Do you like communicating that passion to the general public? Then come along to the 2017 CERN Summer Student Webfest on the weekend of 21 to 23 July! The event is a grassroots initiative, open to all summer students, staff and users. It aims to spark new ideas and innovation for the future of web-based education about CERN, the LHC and particle physics, as well as in humanitarian aid, development and health.

The CERN Summer Student Webfest is a weekend of online web-based creativity, modelled on the gatherings (sometimes called hackfests or hackathons) that energise many open-source communities. You can work with like-minded students and CERN staff to design and build demos of the web apps you would like to see online. Prizes will be awarded to the best projects.

Participants in the CERN Summer Student Webfest will work in teams to design applications that encourage the public to learn more about science and, in particular, CERN’s work. Projects can range from designing online games for kids to creating citizen-science projects and developing low-cost mobile-phone-based cosmic ray detectors. Examples of past projects can be found on the Webfest website.

Although primarily targeted at CERN and CERN openlab summer students, the event is open to people of all ages at CERN with a passion for web-based science outreach and education. You do not have to be a software or hardware expert to contribute: many types of skill sets are needed, from writing and designing to physics and engineering.

So, come along for the weekend and create, innovate and educate about science on the web!

Kick-off
Project ideas will be presented at a kick-off event on Friday, 21 July, from 4.00 p.m. to 6.00 p.m. Participants will organise themselves into teams to work on the most exciting pitches. The kick-off event will also introduce a range of tools for web development, creating online educational tools and contributing to science online.

Submitting your ideas
Anyone participating can pitch a project; pitches consist of short (less-than-five-minute) presentations. Participants are encouraged to submit their project ideas via a tool on the Webfest website in advance, for the best chance of forming a well-defined team.

Where will the participants work?
Teams will work on their Webfest projects primarily in CERN Restaurant 1. As the location is an open-space environment, there will be plenty of opportunity for interaction, both between participants and with the various technical experts taking part in the event. CERN openlab will provide meal tickets for participants.

Presentations and winners
The event will wrap up on Sunday, 23 July at 4.00 p.m., with a judging panel reviewing the results (based on five-minute ‘lightning talk’ presentations by the teams) and awarding prizes.

Many thanks to our sponsors and organisers...
The event is organised by CERN openlab. Our event partners also include Citizen Cyberscience Centre, crowdAI, Citizen Cyberlab project, the Port and the Mozilla Science Lab.