A day in the CERN Control Centre

The CCC is the nerve centre of the CERN beam systems. The people at the five consoles work 24/7 to get everything ready for Run 2 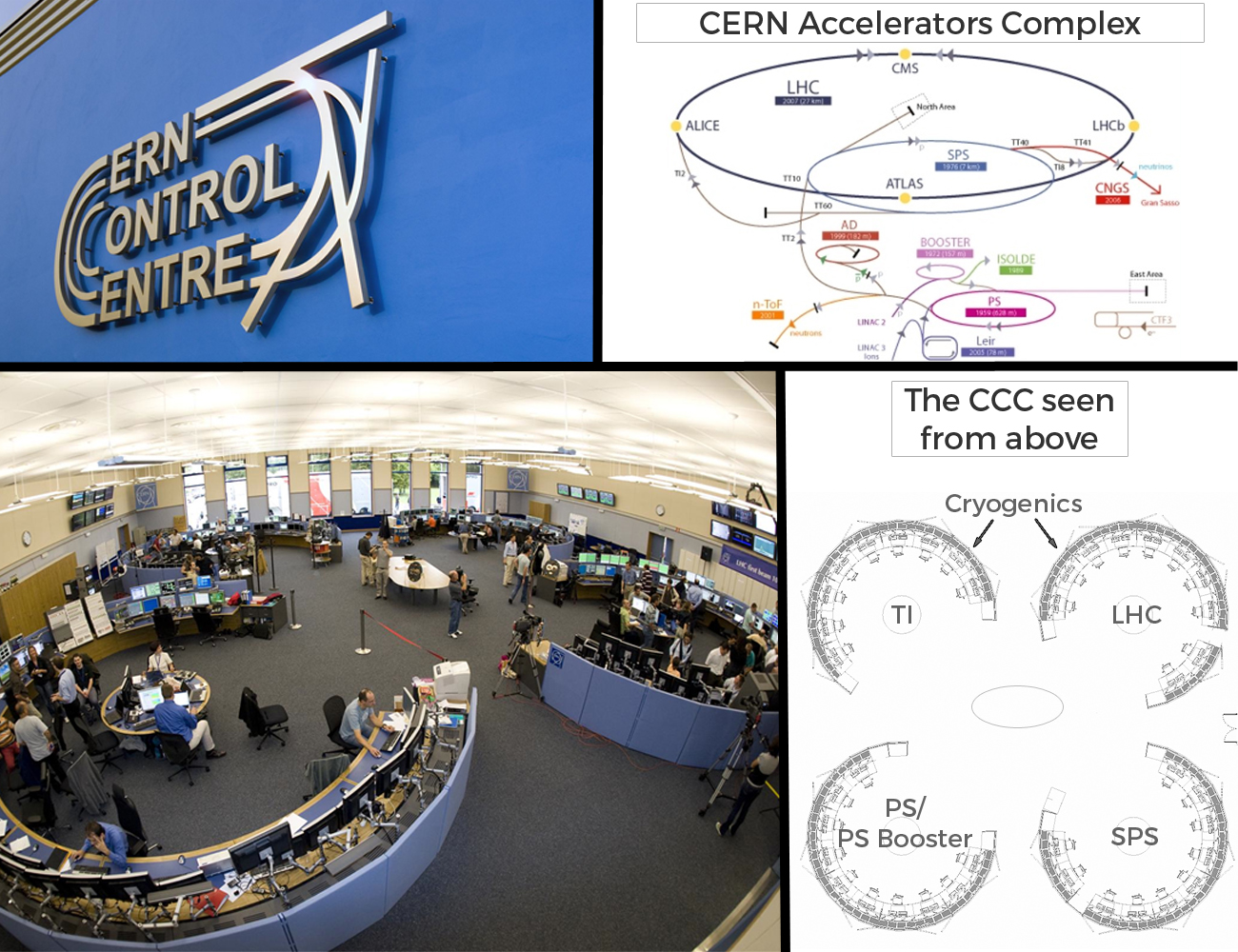 Seen from above, the CERN Control Centre resembles the shape of a quadrupole magnet. The consoles are distributed in four circles, called “islands”, dedicated to the Large Hadron Collider (LHC), the Super Proton Synchrotron (SPS), the Proton Synchrotron (PS) Complex and the Technical Infrastructure (TI) respectively. Spread between TI and LHC are the Cryogenics consoles. Being in the same room allows the 24h-manned islands to be constantly in touch with one another, thus ensuring the best performance of the machines.

At the LHC island, operators are currently busy training the magnets. For them, the best is yet to come, as with the 6.5-TeV energy, many things are about to change. “We’re aware of some of the issues we’re going to face, but we expect the higher energy to bring new issues that will become evident only once the machine is in operation,” explains Mirko Pojer, the engineer in charge of the LHC. Among those issues are UFOs: “Unidentified Falling Objects” that could create unwanted particle collisions in the pipes with a potential risk for the machine. “The effect, probably due to dust particles falling through the beam, causes localised beam loss,” explains Pojer. “That might trigger the automatic beam extraction that reduces the operational efficiency of the machine.” At the moment, the team is performing runs without beams to check all the software, testing the availability of all the systems and doing powering tests for the magnets.

At the Technical Infrastructure island, one person, for a shift of eight hours, monitors CERN’s entire technical infrastructure. “During LS1, each day we have something like two to three thousand alarms going off. With the restart, we expect a smaller number”, explains Gildas Langlois, operator from the Beams Department at the TI station. “Nevertheless, when the LHC starts running at never-before-attained energies, the pressure on our team will be higher, since, from our point of view, a problem occurring during Run 2 could easily grow faster than during LS1.”

The two islands of the injector complex – PS Booster, PS and SPS – have been running at full speed for several months as the injectors were already running last year. The SPS is currently sending argon ions to the North Area, while the PS complex delivered beams to the East Area and the n_TOF facility in 2014. To coordinate their operations, the SPS, PS and PS Booster operation, equipment and user facility representatives meet every week to discuss the programme for the week, the status of the machines, or the beam quality. “So far, we are progressing very well towards the expected operation for Run 2,” explains Ana Guerrero from the PS section in the Beams Department. “The protons are already circulating in the machines and we don’t expect big problems.”

While the current in the LHC magnets increases, the fever rises at the SPS island as the injector will soon be preparing the first beams for the LHC. Initially, only the so-called “doublet” – two proton bunches repeated at a spacing of 25 ns – will be injected. “This special beam is used to perform the “scrubbing”, a way of cleaning the LHC pipes of surface pollution, which can cause “electron clouds”, a phenomenon that can cause beam losses and can be dangerous for cryogenics,” says Karel Cornelis of the Beams Department, SPS section.

If the temperature is increasing elsewhere, it’s “cold stable” in the Cryogenics team, whose control monitors are distributed over the LHC and TI islands. Indeed, the team is in charge of making sure that the temperature of the LHC's superconducting magnets is kept as stable as possible at around 1.9 K. “After analysing what happened during Run 1, we improved the software that regulates the temperature”, explains Antoine Escoleira of the Cryogenics Operation team. “Only once the machine is in operation will we be able to verify its correct behavior.” He adds: “We have enough tools here to intervene via computer if something unexpected happens, but with the restart there will be a little more pressure, since we have to be more than ready to intervene promptly to adjust our machines."

With less than a month to the big event, everything is being prepared to ensure a smooth restart. You can monitor the performance of the whole accelerator complex using the Vistar webtool, and, of course, by reading the LHC Reports in the CERN Bulletin every other week.