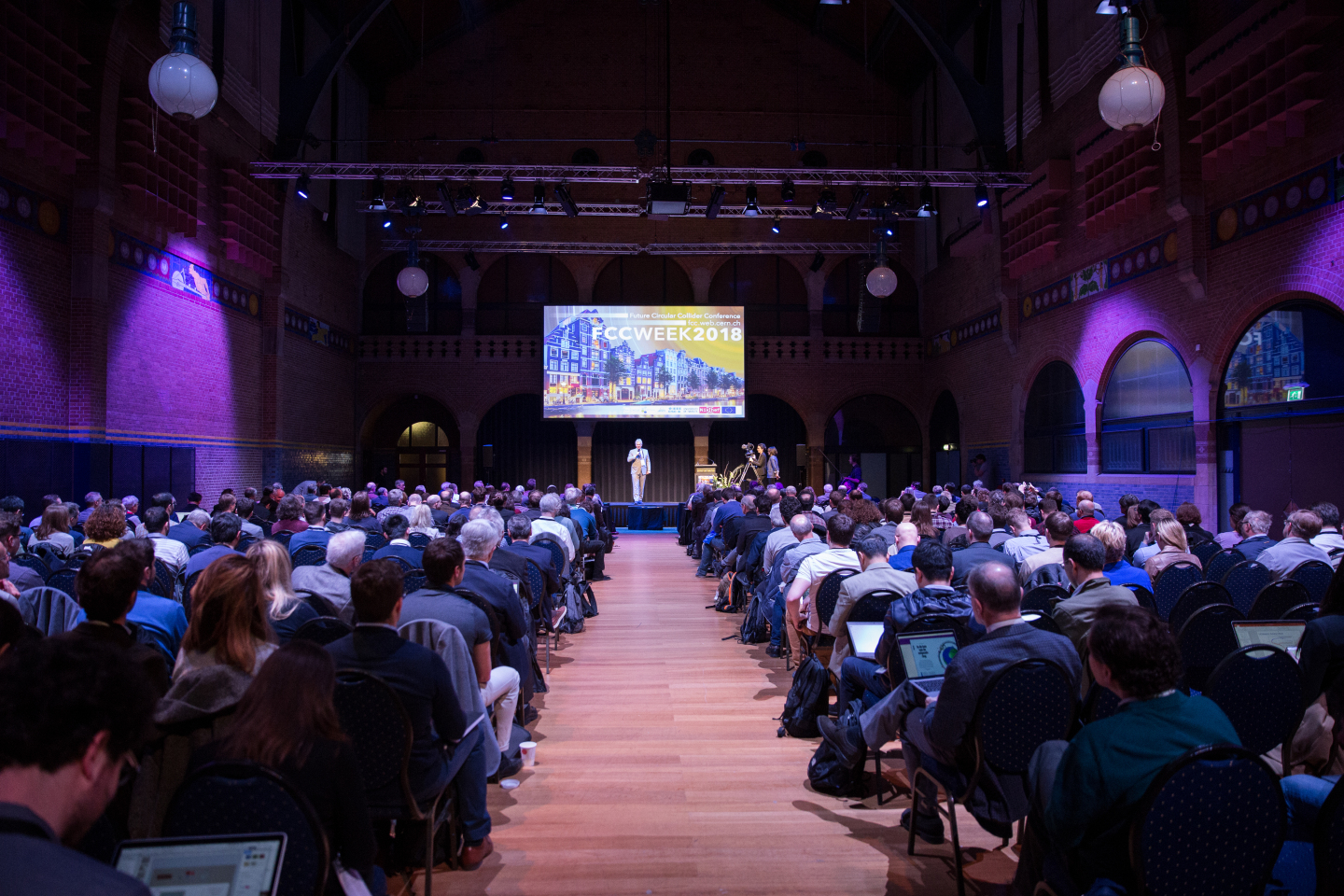 Sijbrand de Jong, President of the CERN Council, at the 2018 FCC week in Amsterdam.

From 9 to 13 April, some 500 scientists from 147 institutes met in Amsterdam for the 2018 Future Circular Collider (FCC) week. This fourth annual meeting of the FCC collaboration offered a vibrant space to discuss the latest research results and present technological breakthroughs that could pave the way for a new large-scale research infrastructure.

Both LEP and the LHC were massive endeavours spanning more than 20 years each, from conception to commissioning. This is why it is timely to advance with the design of the next-generation of circular colliders, which could begin operation after the completion of the HL-LHC research programme.

Open questions in modern physics, such as the nature of dark matter and the observed matter-antimatter asymmetry, along with the need to study the Higgs boson in detail, call for particle accelerators at the energy and intensity frontier. The combination of accelerators envisioned by the FCC study, through their synergies and complementarities, offer an extraordinary tool for further exploration of these questions.

The different options being considered by the FCC study captivate particle physicists and challenge accelerator engineers, with unprecedented opportunities for physics discoveries and technological breakthroughs.

“Historically, accelerators have been our most powerful tools for exploration in particle physics and I believe they will continue to play a crucial role in the future. They will be part of a compelling and diverse scientific programme together with other, complementary approaches,” said Fabiola Gianotti, CERN’s Director General, during the FCC week opening session. She added: “I cannot see a more natural and better place than CERN to host future circular colliders of the complexity of the FCC, given CERN’s demonstrated expertise in building and operating high-energy accelerators, the existing powerful accelerator complex, and the available infrastructure that we continue to upgrade.”

An intense week of meetings and discussions looked at performance-optimised machine designs, detector concepts and future R&D lines to meet the physics targets along with studies on the infrastructure and civil-engineering requirements. More than 285 presentations and 80 posters covered current progress as well as new concepts. Parallel sessions summarised R&D efforts on topics including superconducting materials and high-field magnets, high-efficiency klystrons, superconducting RF cavities, as well as beam-monitoring systems, energy-efficient cryogenics and vacuum systems.

The FCC study offers opportunities to train the next generation of scientists, engineers and innovators who will further develop accelerator technologies that could find many applications outside particle physics. The FCC innovation awards acknowledged the high-quality work of young researchers, which is key for the realisation of this project. “One of the main goals of the FCC collaboration is to help young, talented and motivated colleagues to develop into successful scientists, by presenting networking opportunities and exposing them to new views and perceptions. The high number of young people participating in the FCC week is testimony to the attractiveness of the ongoing research and is key for the success of this project,” says Michael Benedikt, FCC study leader.

The worldwide interest in the FCC study was reflected in the number and diversity of attendees at this year’s meeting, with participants from research centres, universities and industrial partners in 30 countries. The FCC collaboration is now gearing up for the preparation of its conceptual design report, set to be published by the end of 2018 in time for the upcoming update of the European Strategy for Particle Physics.