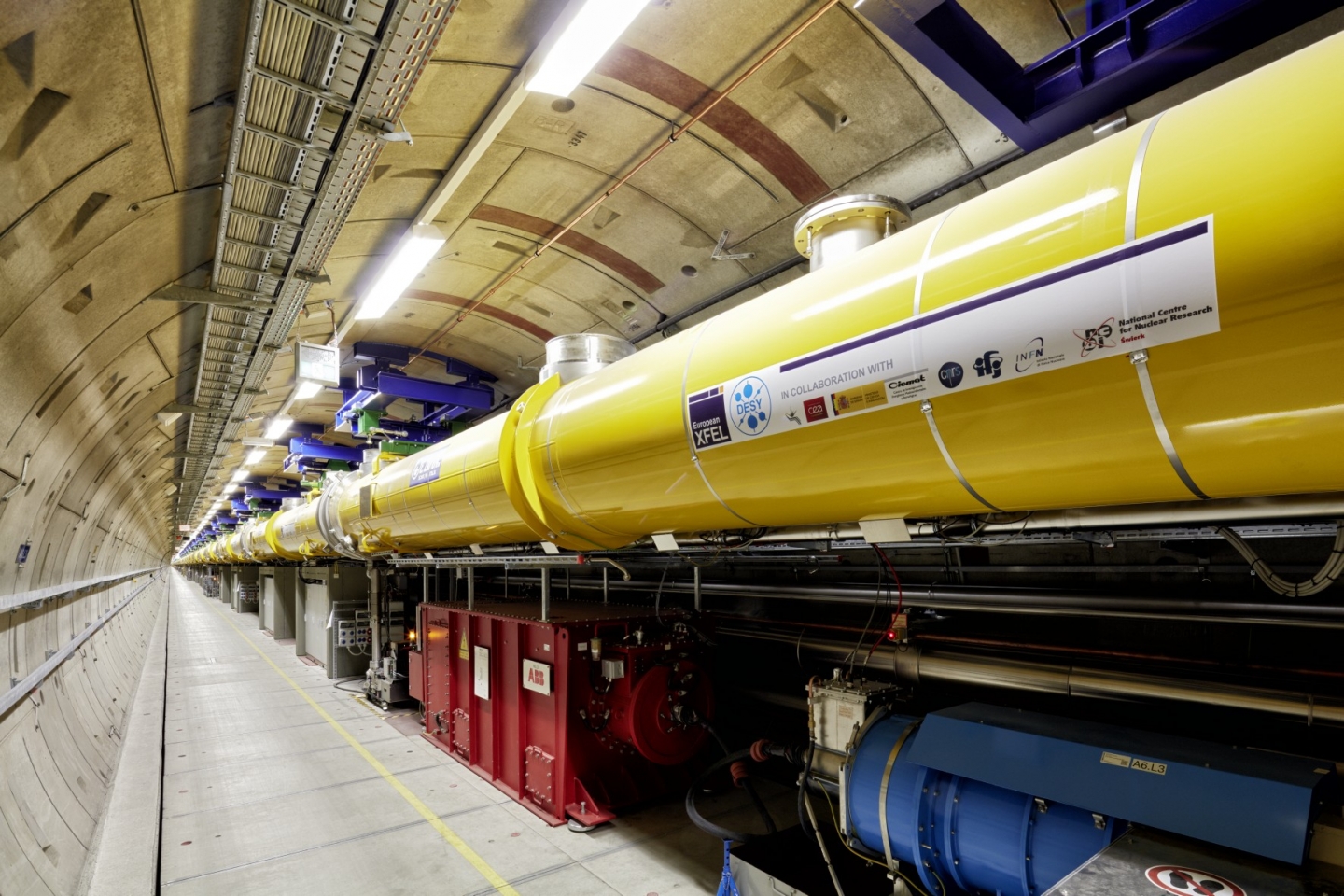 The main linac driving the European XFEL, suspended from the ceiling to leave space at floor level, photographed in January 2017. (Image: D Nölle/DESY).

Today, an official ceremony marked the inauguration of the European X-ray Free-Electron Laser (European XFEL), in Schenefeld-Hamburg, Germany. Extending over a distance of 3.4 km in tunnels departing from DESY in Bahrenfeld-Hamburg, it will generate ultrashort X-ray flashes at a rate of 27 000 per second with an intensity one billion times higher than the best conventional X-ray sources. The facility will produce ultrafast snapshots of atomic and molecular movements in unprecedented detail, opening completely new research opportunities for science and industry users to image electronic, chemical and biological processes.

The story of the European XFEL is a wonderful example of the longstanding R&D synergies between the high-energy physics and light-source worlds. While traditional large X-ray facilities are based on storage rings in which energetic electrons circulate while emitting X-rays, X-ray free-electron lasers (XFELs) use special accelerating structures initially conceived for a linear collider for particle physics more than 20 years ago.

Driving the European XFEL is the longest superconducting linear accelerator ever built, a 1.4-km-long machine that uses superconducting radio-frequency (SRF) cavities to accelerate electrons highly efficiently to an energy of 17.5 GeV. Despite the clear benefits of SRF cavities, before the mid-1990s the technology was not mature enough and too expensive to be practical for a large facility. Based on initial experience with individual cavities – including those of LEP – the TESLA collaboration, hosted at DESY, developed highly performing cavities and reduced the cost for a linear collider proposal and for the construction of the European XFEL. Today the European XFEL also serves as a prototype for a potential linear collider, the ILC.

Exiting the European XFEL linac, electrons are rapidly deflected in an undulating left–right pattern by traversing a long periodic array of magnets called an undulator, causing the electrons to emit intense and coherent beams of X-ray photons. X-rays emerging from the undulator finally arrive at the European XFEL headquarters in Schenefeld where user experiments will take place.

The European XFEL is the culmination of a worldwide effort, with European XFEL GmbH being responsible for the construction and operation of the facility, especially the X-ray photon transport and experimental stations, and its largest shareholder DESY leading the construction and operation of the electron linac. The facility joins other major XFELs in the US (LCLS) and Japan (SACLA), and is expected to keep Europe at the forefront of X-ray science for at least the next 20 to 30 years.

Construction of the €1.2 billion European XFEL began in January 2009, funded by 11 countries, with Germany and Russia as the largest contributors, although no fewer than 17 European institutes contributed in-kind to the accelerator complex. “The European XFEL is the result of intense technological development in a worldwide collaboration that has exceeded expectations,” says Eckhard Elsen, CERN’s Director for Research and Computing. “It is an impressive example of how cutting-edge accelerator research can benefit society, and demonstrates the continuing links between the needs of fundamental research in particle physics and X-ray science.”

A full account of the European XFEL and its superconducting linac, which appeared in the CERN Courier July/August 2017 issue, can be read here and here.

X-ray tests: Night at the collider