Here’s to a long life for Linac 4!

Ten years after it was approved, CERN’s new accelerator is officially inaugurated 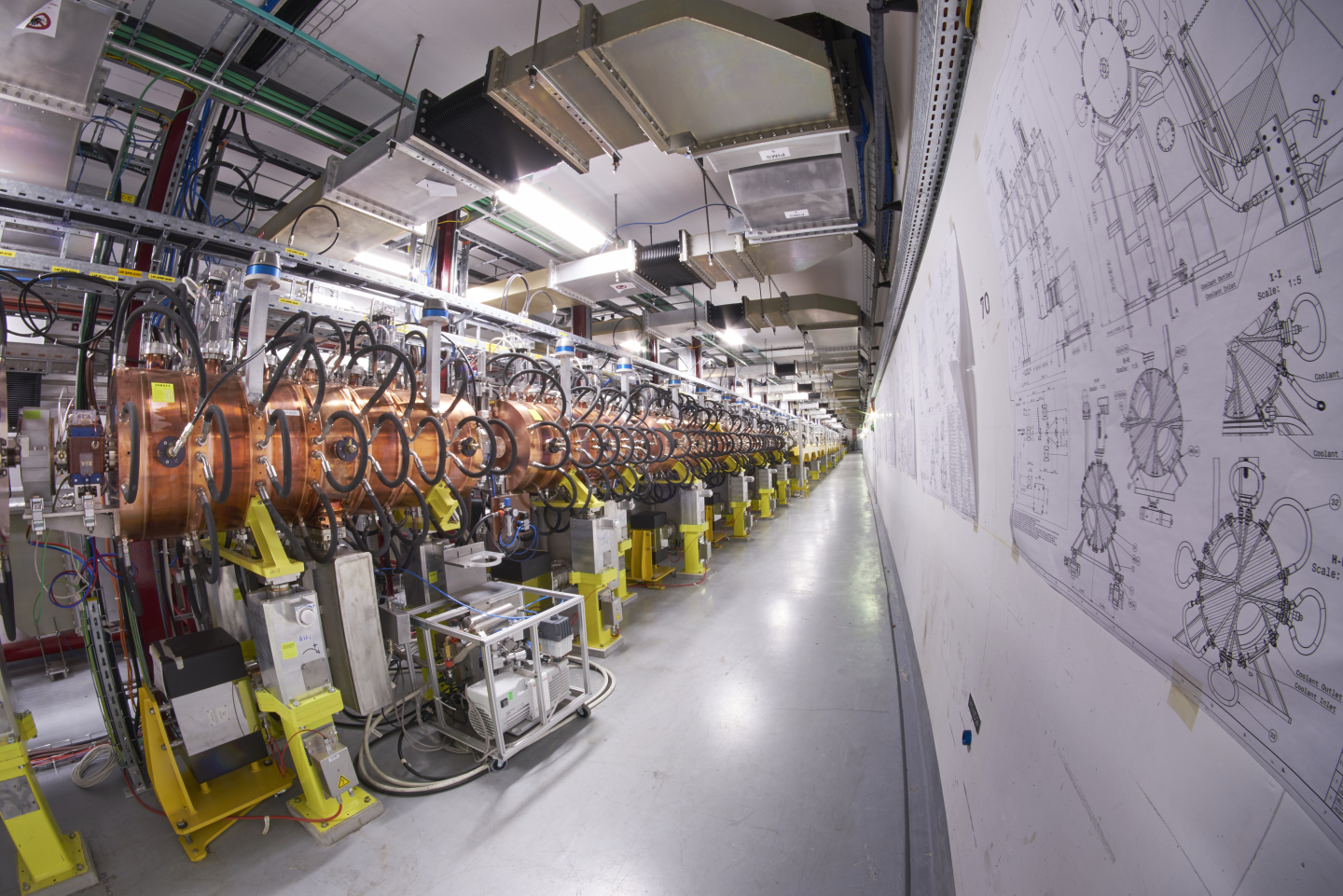 View of the PI-Mode Structure (PIMS) cavities, which will accelerate the Linac 4 beam from 100 to 160 MeV. These cavities are one of the innovations of Linac 4. (Image : Maximilien Brice/CERN)

9 May is traditionally Europe Day and it is no coincidence that this date was chosen for the official opening of Linac 4, the first inauguration of a new accelerator at CERN since the LHC started up in 2008. Linac 4 was supported by a research and development programme within the framework of the European CARE (Coordinated Accelerator Research in Europe) project, as well as by special contributions from the European Commission and several European countries.

Linac 4 has been operational since it successfully completed acceleration tests at its nominal energy of 160 MeV at the end of 2016. It will be connected to the rest of the accelerator complex during Long Shutdown 2 in 2019-2020 and will then become the first link in CERN's accelerator chain, replacing Linac 2, which has been in service since 1978. "The acceleration tests at 160 MeV were very encouraging and we are relieved to know that, if we encounter a problem with Linac 2 before the end of 2018, Linac 4 can take over," says Frédérick Bordry, Director for Accelerators and Technology at CERN. "The next two years will be important for us to reach beams of an intensity compatible with the requirements of the other accelerators and particularly to reach more than 95% availability for Linac 4, which is an essential level for the first link in the chain." The 86-metre-long accelerator will undergo various reliability tests over the coming months. The teams will then concentrate on connecting it to the PS Booster.

The inauguration provided a good opportunity to reflect on the accelerator's history. Maurizio Vretenar, who led the project until the start of this year, revisited the human and technical feats leading to the birth of the new accelerator: after a gestation period of 20 years. "Roland Garoby and I wrote the first article mentioning the construction of a new linear accelerator in 1996," recalled Vretenar. "It was clear at the start of the 1990s that the LHC injectors would one day reach their limits and we would have to think about replacing or upgrading them.”

At the time, the proposed machine was intended to accelerate protons up to 2 GeV and most of its sections would have been superconducting. The concept evolved, the energy level was reduced and the superconducting option was dropped. "But in science, ideas don't die, they float around and sometimes appear in a different form," continued Vretenar. The ESS (European Spallation Source), which is under construction in Sweden, is making use of the principles behind the superconducting option and of many of Linac 4's other components for low-energy acceleration. In 2007, the current design for Linac 4 was adopted, whereby the machine would accelerate H- ions to an energy of 160 MeV thanks to a chain comprising four different types of accelerating structure.

Nonetheless, there were still some mountains to move. Starting with Mont Citron, the rather hyperbolic name given to the hillock near to the PS that needed to be flattened to allow the construction of the building for the new accelerator. "And it had been 20 years since a proton linear accelerator had been constructed anywhere in Europe," recalled Vretenar. "The know-how was starting to fade and we needed to build an innovative 21st-century machine that would also be reliable." Linac 4 incorporates several innovations, such as its ion source, its two high-energy accelerating structures (CCDTL and PIMS), which are being used in an accelerator for the first time, and its focusing system, which uses 126 permanent magnets. "We have contributed to rebuilding the skills needed for linear accelerators in Europe," adds Vretenar.

But Linac 4 reaches beyond the borders of Europe. As well as contributions from Poland, France, Spain and Italy, the accelerator's design and construction benefitted from the participation of Russia, India and Pakistan.

Maurizio Vretenar concluded by warmly thanking Alessandra Lombardi, his deputy throughout the project, who has now taken the baton and will be in charge of the test and connection phases. He also praised the CERN personnel who developed and constructed the accelerator: "CERN personnel are devoted and motivated. Throughout all these years it has always been a pleasure to work with you."