Since it began operation in 2010, the LHC has delivered over 100 fb-1 (inverse femtobarns) of integrated luminosity to each of ATLAS and CMS 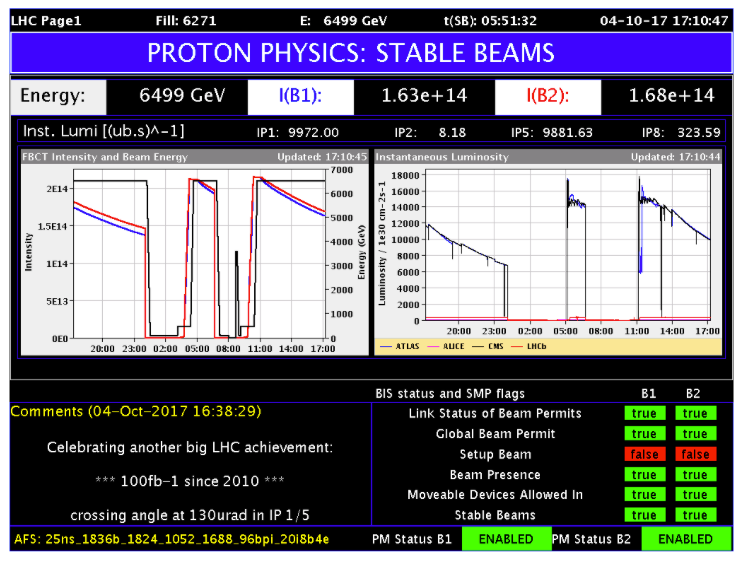 This milestone was reached on 28 September and only takes into account the data taking with proton bunches spaced by 25 nanoseconds.

Over the years, the integrated luminosity figures have varied greatly. In 2010, the LHC started with beam late in the year, while in 2011 the LHC teams were still learning how to run the new and complex LHC. The year 2012 was clearly a luminosity production year, which was rewarded with impressive physics results, notably the discovery of the Higgs boson.

In 2013 and 2014, there was virtually no physics at the LHC due to the first long shutdown (LS1), except for short periods in early 2013 with ion physics and a proton-proton reference run.

Following the massive amount of work done on the machine during LS1, the LHC was restarted in 2015, requiring substantial time for the validation of all systems and re-commissioning of the machine with beam, followed by a relatively short physics run. Last year, 2016, was again a production year, and the integrated luminosity surpassed expectations. Following this success, the target for 2017 and 2018 was raised to 90 fb-1 for the two years combined. On 28 September, this endeavour resulted in the 100 fb-1 mark being surpassed, a memorable moment in the history of the LHC so far.

The LHC is now well on course to deliver the expected luminosity, despite the challenges encountered in 16L2. The peak luminosity had been decreased to ‘just’ its design value (1 x 1034 cm-2 s-1) but much progress has since been made with the understanding of the “16L2” issue. An important collaborative effort by people from different groups allowed elaborating methods to increase the beam performance again without interrupting the run for work on 16L2.

On 5 September, the switch to a “8b4e” beam scheme was made, with 1916 bunches, the maximum possible with this beam scheme. In a second stage, the intensity per bunch was increased from 1.1 x 1011 protons per bunch to close to 1.3 x 1011 protons per bunch. These two actions, together with the decrease of the beta star from 40 cm to 30 cm, brought the peak luminosity back up to 1.5 x 1034 cm-2s-1. In the meantime, the LHC injectors prepared for a high brightness version of the 8b4e beam that provides 1.2 x 1011 protons per bunch in a beam size that is about 40% smaller. This beam was taken into the LHC for the first time on 2 October and the next day it nearly equalled the record peak luminosity of 1.75 x 1034 cm-2s-1, which had been obtained on 9 August with the standard 25 ns BCMS beam (Bunch Compression Merging and Splitting).

With these beam conditions and good machine availability, the initial goal of 45 fb-1 for 2017 is again within reach. Luminosity production for proton physics will continue until Monday, 20 November. After that, there will be a period of machine development and some special physics runs recently added following approval by the research board, before the winter maintenance break.