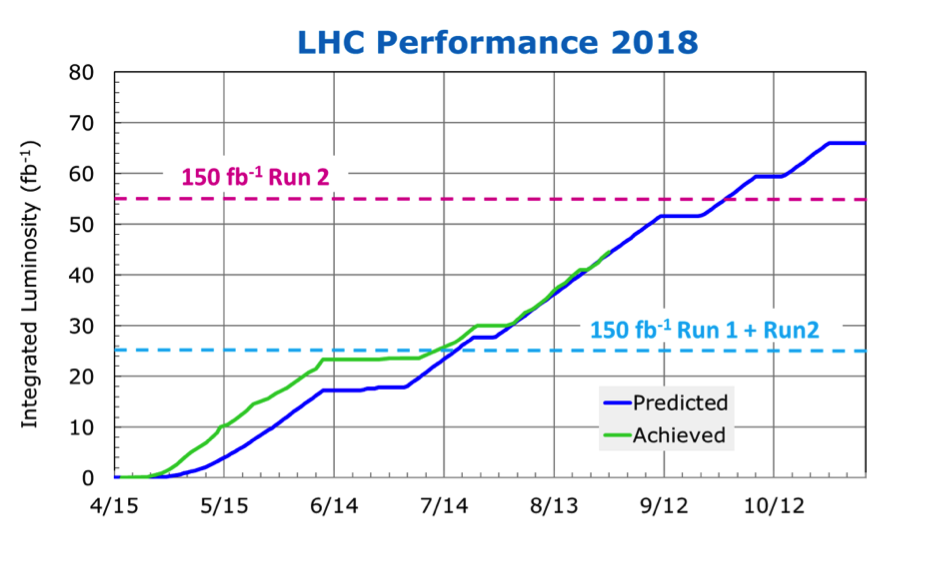 Since the recovery from the five-day machine development (MD) period that started on 23 July, the LHC has been in luminosity production mode, crawling its way up the predicted luminosity curve with the aim of attaining the 2018 goal of 60 fb-1. The period of luminosity production will be interrupted by another block of MD and a second technical stop, starting on 12 September. The machine should then be back in production on Monday, 24 September, which coincides with the CERN Council week, by which time we aim to have passed the 50 fb-1mark. Another four weeks of production before the switch to the Pb ion run should then be enough to reach the goal of 60 fb-1.

The last few weeks have unfortunately not been trouble free, as the injectors have suffered from a series of issues that have caused prolonged periods of beam unavailability. Not all of the unavailability translates directly into downtime for the LHC as, in some cases, fills can be maintained until the injectors are available again.

The breakdown of an uninterruptible power supply (UPS) in the PS complex at around 5 p.m. on Wednesday, 15 August was a good example of this. The LHC was in stable beams when many front-end computers (FEC) in the PS complex stopped working due to the UPS breakdown, making beam production impossible. Although the actual UPS issue lasted only 4 seconds, it took 12 hours to fully recover the machines and to resume beam production. The LHC managed to bridge the entire period with a fill that lasted 26.5 hours, which is long, but nevertheless a good 10 hours short of the record fill length.

However, the next day a serious water leak was found in one of the 100 main PS magnets. Unfortunately, the LHC did not manage to fill before the leak occurred and was therefore without beam for the 22 hours it took to repair it.

Not long after, at around 5 p.m. on Monday, 20 August, the LHC had dumped the beam to re-fill when, at nearly the same time, beam-induced losses in the SPS caused a vacuum leak in one of the main bending magnets in sextant 3 of the accelerator, preventing any production of beam out of the SPS. After investigation, the magnet had to be replaced and, since the system had been at ambient pressure for some time, prolonged pumping and conditioning with beam were required before the usual 144-bunch trains could be produced again for the LHC.

The LHC team did not sit idle, but used the downtime well by getting many of the interventions requiring accesses that were on the waiting list done. Once that had been completed, they switched to setting up the ion cycle in anticipation of the Pb ion run that starts on 4 November. Initially, this cycle was set up without a beam, but as soon as the SPS could deliver single bunches, which was at around 5 p.m. on Wednesday, 22 August, these were used to validate part of the cycle. By the time the 144-bunch train was available from the SPS, which was at around noon on Thursday, 23 August, substantial progress had been made on the set-up and an efficient switch was made back to the proton cycle to resume luminosity production.

Since this last issue, the injectors have had very good availability and the LHC has managed to fill when necessary. Despite all the issues mentioned above, close to 18 fb-1 have been integrated since the recovery after the last MD block on Saturday, 28 July. This is an average of 3.6 fb-1per week, with 4.6 fb-1attained during the last week. Therefore, accumulating 2.1 fb-1in the coming week to reach the 50 fb-1before the MD and technical stop period should be feasible, provided no serious issues loom on the horizon.