LHC Report: Back in production 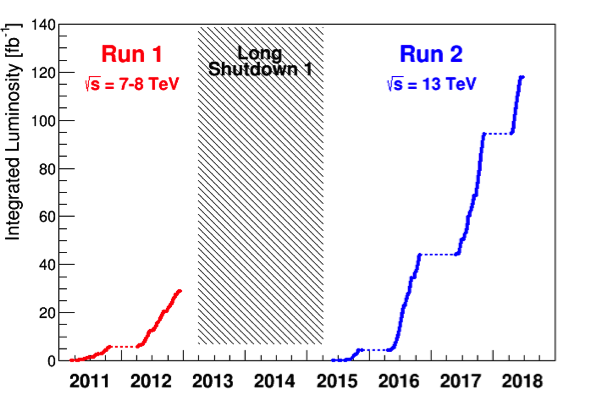 The integrated luminosity for Run 1 and Run 2.

Since the last LHC Report, the LHC has gone through a period of Machine Development (MD), a four-day technical stop, a technical stop recovery and a series of special physics runs.

The first technical stop of 2018 started on Monday, 18 June, when the last MD beam was dumped at 6.00 a.m. Many teams were ready to access the accelerator for the 300 maintenance and repair activities declared in the IMPACT tool. For the technical stop, nearly the entire machine was kept under operational cryogenic conditions, allowing a short stop and a potentially quick restart. The number of people in the tunnel reached almost 190 on Wednesday morning. At the end of the afternoon on Thursday, 21 June, the machine was handed back to the Operations team for the restart.

The technical stop recovery was, unfortunately, not as smooth as anticipated due to some technical issues, but the activities to prepare for the special physics runs were nevertheless able to start on Sunday, 24 June. Two types of special physics runs were planned: the van der Meer scans that allow the experiments to make an absolute measurement of the luminosity, and the b*= 90 m run, for which the beams are not squeezed to their usual b*of 30 cm but de-squeezed so that the particles collide under shallow angles, as required for the Roman Pots experiments, TOTEM and ALFA.

For these special physics runs, three different configurations were required and each of them needed to be validated. This validation mainly concerned machine safety and consisted of the production of loss maps in order to verify that losses in the transverse and longitudinal planes are correctly absorbed by the different collimator systems. A total of 77 loss maps were generated and measured, requiring 14 cycles from injection through acceleration and into collisions. This is a time-consuming activity, the results of which are evaluated and, if deemed correct, formally validated by experts. Unfortunately, the whole programme was delayed by four days due to technical issues but also due to the complexity of the programme itself. Nevertheless, on Saturday, 7 July, the programme was successfully completed and the LHC reverted to production mode for standard 25 ns physics.

In the coming days, the LHC should reach the integrated luminosity target of 150 fb–1, set for Run 1 and Run 2 combined. With only 2.6 fb–1 to go, this goal is very near. However, this does not mean that the LHC will be stopped soon. The next challenge will be to reach the goal set for 2018: 60 fb–1. All the teams around the LHC are fully committed to continuing the hard work and reaching this goal before the end of October.