LHC Report: back on track 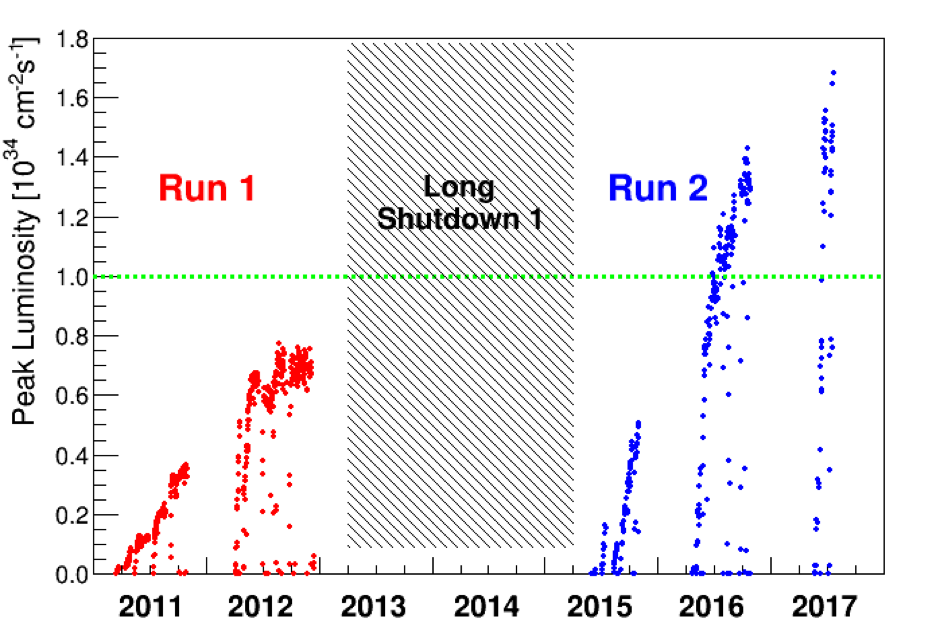 Evolution of the LHC peak luminosity over the past seven years. The green dotted line is the design luminosity.

A new LHC luminosity record was established in the middle of July, just two weeks after the first fill with 2556 bunches delivered luminosity to the four experiments on 28 June. This record was achieved in spite of some anomalous losses observed while ramping up the beam intensity.

Following the re-commissioning of the LHC with beam in May, the number of bunches circulating in each beam was progressively increased during an intensity ramp-up, culminating on 28 June when two beams, each with 2556 bunches, collided. However, as the intensity was increased, unexpected losses were observed for both beams in a number of fills near a magnet interconnection in the arc between ATLAS and ALICE, eventually leading to beam dumps. The presence of nuclei in the passage of the beam, most likely in the form of a gas, could be a possible explanation for such localised beam losses. Verifications of the vacuum chamber aperture at injection did not reveal any obstacles.

In the past, LHC operation has been affected significantly by events nicknamed UFOs (Unidentified Flying Objects), which are now believed to be due to dust particles of around ten micrometres in diameter that fly into the beam. The resulting interactions between the beam protons and the dust particle nuclei are able to generate losses, resulting in quenching of the LHC superconducting magnets when the dust particles are large enough. In most cases, the beam loss monitors installed around the circumference of the LHC detect the losses before a quench occurs and dump the beam preventively. In previous years, up to around 20 LHC fills were lost per year due to large UFOs. Fortunately the rate of UFO events is decreasing steadily and their impact on operations is diminishing.

After the first long shutdown in 2015, an object given the nickname ULO (Unidentified Lying Object) was detected. This object is lying on the bottom of the beam two vacuum chamber between LHCb and ATLAS. Fortunately the vacuum chamber is sufficiently large and the ULO sufficiently small that the steering magnets can be used to 'bump' the beam around the ULO. With this measure in place, the ULO does not affect LHC operation even at the highest intensities.

The newly observed losses share some similarities with UFOs and the ULO, but the exact mechanism is not yet understood. Data on beam observables are collected parasitically to physics operation to characterise the losses and define mitigations. In the week of 20 July, it was observed that the introduction of a sufficiently large magnetic field in a nearby steering dipole mitigates the losses. This technique is currently being applied to provide stable physics production in the presence of this effect. Despite this issue, a new LHC luminosity record was set at 1.67x1034 cm-2s-1 in the second week of July.

The three days from Wednesday, 26 July to Friday, 28 July were dedicated to measuring the absolute scale of the luminosity at 13 TeV. The luminosity of a collider is a very important parameter because the precision obtained in measuring the production cross-section of a given physics process depends critically on the accuracy with which the luminosity is known. Luminosity is also the usual figure used to benchmark the efficiency of the collider's operation.

Special beam optics and parameters are necessary to perform this task; both are tailored to obtain the smallest possible uncertainty in the measurement. The method was pioneered by Simon van der Meer in 1968 at CERN's Intersecting Storage Rings. The inelastic proton-proton collision rate is monitored by dedicated luminosity detectors at the experiments as the beams are moved across each other, first in the horizontal and then in the vertical direction. This "VdM scan" provides a measurement of the beam-overlap area, which is proportional to the transverse beam size, the first ingredient needed to solve the luminosity equation. The second main ingredient is the simultaneous precision measurement of the bunch currents, which is performed using various devices from the machine and the experiments. This information, combined with the total number of bunches per beam, provides a direct calibration of the experiment's luminosity detectors. Following a day of preparation, two fills lasting between 8 and 14 hours were dedicated to these “VdM” scans at each experiment.