LHC Report: An eventful and successful 2017

Now that the successful 2017 run has ended, let’s take a look back at a year full of events 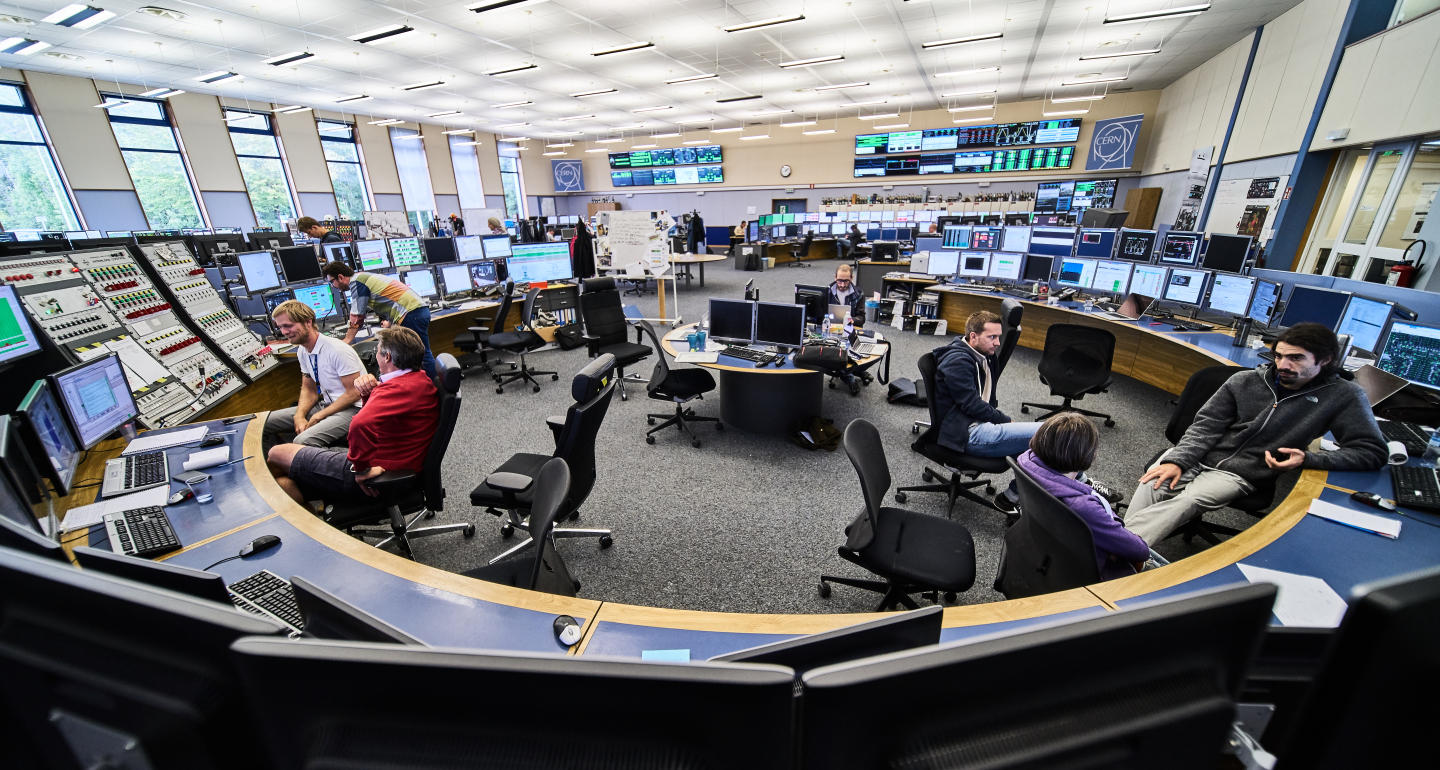 The CERN Control Centre in 2017. The accelerator complex and the LHC produced a record amount of data in 2017. (Image: Julien Ordan/CERN)

The last LHC proton beam for 2017 was dumped on 4 December, at around 4 a.m. The machine was switched off and the helium inventory was secured at the surface. Soon, instead of protons, people will be running around the LHC, performing maintenance and upgrade activities, before physics restarts in the spring of 2018. December is a good time to look back at a year full of events, challenges and successes.

On 29 April, the first beam was injected, following an extended year-end technical stop (EYETS). The machine was then commissioned with a new optics system using an Achromatic Telescopic Squeezing (ATS) scheme to allow for smaller beam sizes (beta*) in the experiments.

Less than a month later, on 23 May, although with only a few bunches, the first stable beams were declared, and the experiments were able to start recording data. A short period of what is known as interleaved commissioning and intensity ramp-up started, during which a one-week scrubbing run also took place to reduce the emission of electrons from the beam pipe. This is important because it diminishes the electron clouds in the vacuum chamber, which can destabilise the beam. Stable beams with 2556 bunches were declared on 29 July and, soon after that, on 29 August, a new peak luminosity record was established – 1.74x1034 cm-2s-1, which is nearly 75% beyond the design luminosity.

During the ramp-up to this peak luminosity, the first signs of an issue in cell 16L2 arose when beam losses were observed. On 10 August, trying to solve the 16L2 issue, the beam screen was warmed up to evaporate potentially frozen oxygen and nitrogen and to condensate it on the cold bore. Unfortunately, while this method had been used successfully in the past and in other places in the machine, this time it did not produce the desired result, and the 2556 bunches could not be kept in the LHC.

A short period of reduced beam performance commenced. This was an opportunity for the injectors to show their immense flexibility in producing different beam patterns by constructing the 8b4e (eight bunches and four empty slots) beam. This paved the way for the number of bunches in the LHC to be increased again, as electron cloud production, thought to contribute to the beam dumps as a result of the 16L2 issue, was reduced. The standard 8b4e beam was used by the LHC on 4 September, but development of the beam scheme continued in the injectors and, on 2 October, a brighter version of this beam was delivered to the LHC. In the meantime, the LHC had also started to exploit the ATS optics and the beta* was reduced from 40 cm to 30 cm, increasing the luminosity for the experiments.

As early as 30 October, the goal for 2017 was reached as the 45 fb-1 mark was passed. On 2 November, stable beams were declared with a peak luminosity of 2.05 x 1034cm-2s-1, more than double the design luminosity. By the time the main proton run came to an end on 11 November, more than 50 fb-1 had been delivered to each of ATLAS and CMS. A special physics run and an intense machine development programme then took place, finishing on the morning of 4 December, which concluded the successful 2017 LHC run.

Although the Operations group is often in the spotlight when it comes to running the accelerator complex, this year’s results were obtained thanks to the effort of a much larger team of people. This team consists of members of many groups in the different departments. A big thanks to all these people for all their work, support, ideas and dedication.

We can therefore all look back on a busy but successful year. We can also look forward to a short break over the holidays before restarting the accelerator complex again in the spring with renewed energy.