As the 2016 LHC run ends, the machine has transcended the dreams of its designers 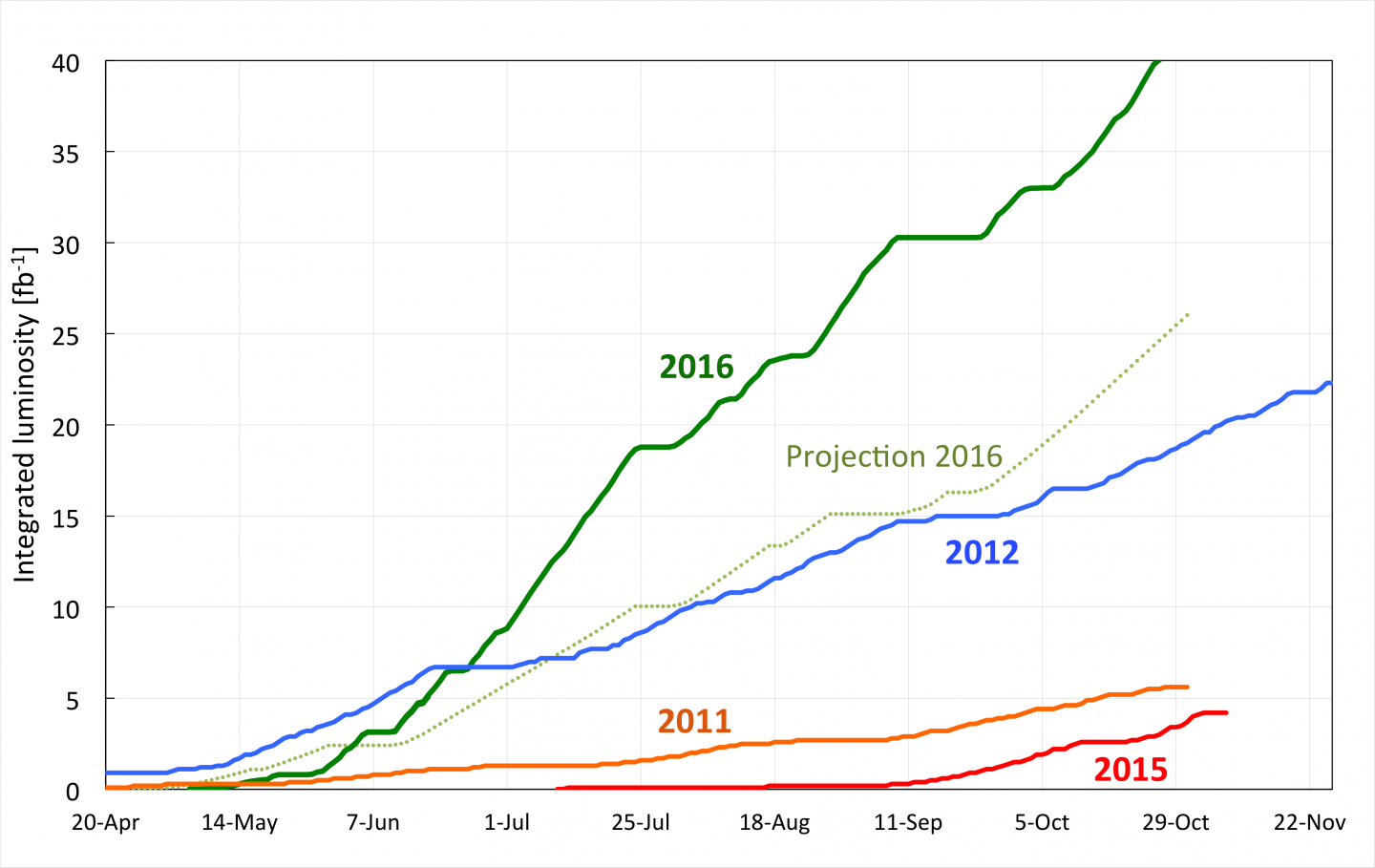 On 5 December, the 2016 LHC run came to a close, marking the end of the first full year of data-taking at a beam energy of 6.5 TeV. Over the past year, the machine delivered peak proton–proton luminosity well above design levels to ATLAS and CMS, coupled with excellent availability. ALICE and LHCb also enjoyed sustained operation at their requested levelled luminosity values. The impressive final 2016 totals of 40 fb-1 to ATLAS and CMS, 1.9 fb-1 to LHCb and 13.4 pb-1 to ALICE reflect the immense amount of effort that has gone into the preparation of beam in the injectors and the performance of the accelerator systems. They also reflect the established level of understanding and control, to maximise overall performance while safely and relentlessly driving the beams through the complex operational cycle.

This level of control is shown in the flexibility of the LHC during dedicated special physics runs and a diverse and dynamic machine development programme. Special runs in 2016 included a challenging set-up with very large beams at the interaction points of ATLAS and CMS. These were needed for the forward physics experiments, ALFA, TOTEM and AFP, allowing them to successfully probe the very small angle proton–proton elastic scattering regime. However, a real demonstration of the maturity of the LHC came at the end of the year.

The 2016 run ended with four weeks of a very successful proton–lead run. For this run, the experiments had requested a variety of specific operating conditions, at two different collision energies.

A key part of the proton–lead strategy was to operate very efficiently in an initial run at a collision energy of 5.02 TeV, with luminosity levelled at a low value for a special mode of data-taking in ALICE. This allowed the fills to be very long; indeed, in the week from 10 November, the LHC spent 75.8% of the time colliding in “stable beams” at constant luminosity and notched up a new record for its longest fill (almost 38 hours).

After that, the schedule recovered from initial delays. But the pressure on the many teams did not abate, as they pushed on to set up a new configuration for the maximum energy of 8.16 TeV. The fills became much shorter as the lead beam was burned away at high luminosity.

A week later, following a short run for the LHCf experiment, the directions of the beams were reversed in yet another set-up phase.

Thanks to the performance of the injectors and a number of improvements in the LHC, the luminosity was pushed up to 7.8 times the design value set a few years ago. It could have gone even further had the intense flux of lead beam fragments from the collisions not risked quenching nearby magnets.

On the last day of the run, the LHC returned to the initial configuration and topped off the data taking at 5.02 TeV.

By the end of the 2016 proton–lead run, every one of the high-priority goals (plus some subsidiary ones) for ATLAS, CMS, ALICE and LHCb had been comfortably exceeded. For example, ATLAS and CMS received about 190 nb-1 of integrated luminosity at 8.16 TeV, almost twice the goal. A proud end to an exceptional year of LHC performance.