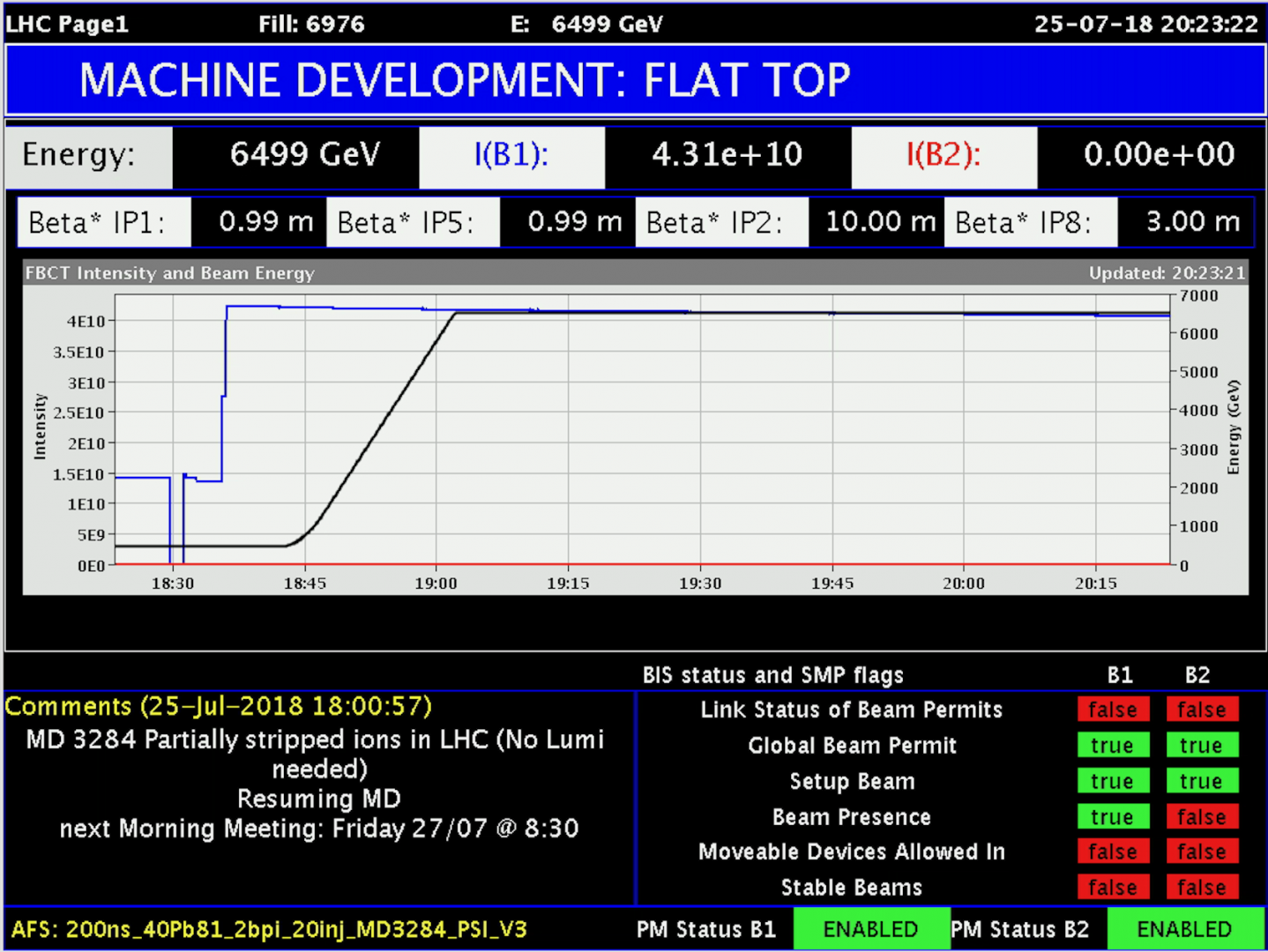 LHC Page 1 announcing the run with “partially stripped ions” in the LHC.

The LHC has just come out of a successful week of machine development (MD). At all of CERN’s machines, MD periods are used to carry out studies covering a wide spectrum of topics. The studies that were carried out at the LHC concerned current issues, as well as tests of future configurations for LHC Run 3 (2021–2023) and the High-Luminosity upgrade (HL-LHC). Looking further into the future, some tests were performed in view of the Future Circular Collider for hadrons (FCC-hh) and of the Physics Beyond Colliders studies.

The heat load generated by the beams and deposited on the surface of the vacuum chamber, thought to be due to clouds of electrons generated by the closely spaced bunches inside the LHC, is one of the performance limitations of the LHC. The heat must be extracted by the cryogenic system, which has a limited capacity. Some of the LHC arcs (also called sectors) generate more than twice as much heat as the best arcs, a mystery that has not yet been understood. During this MD period, the heat load was measured carefully as a function of the beam intensity in order to compare it with models. It was also measured with single beams present in the LHC to disentangle the contributions of the two vacuum chambers to the heat load.

Looking further into the future, the Achromatic Telescopic Squeezing (ATS) optics currently in use were tested in new configurations that might provide baselines for operation during LHC Run 3. One option boosts the efficiency of the LHC octupole magnets, which play a crucial role in stabilising high-intensity beams. With the number of protons per bunch expected to increase by around 50% in Run 3, from around 120 billion per bunch to 170 billion per bunch, the tested configuration could become an important ingredient in controlling the intense Run 3 beams provided by the LHC injectors.

Within the framework of the Physics Beyond Colliders study, another test saw lead ions with one remaining electron attached to each nucleus successfully accelerated up to an energy of 6.5 TeV. Usually lead ions accelerated in the LHC are stripped of all their electrons (the last electrons are stripped off in a foil installed between the PS and the SPS); in this case, the foil thickness was tuned to retain one last electron. These “partially stripped ions” (PSI) must first be injected and accelerated in the SPS before they can be captured in the LHC. Because the remaining electron is easily stripped off by interaction with gas molecules, the lifetime of such beams depends critically on the vacuum conditions. Thanks to the excellent vacuum condition in the LHC, an ample lifetime of 40 hours was measured during the test. If the PSI are made to interact with a laser beam of the appropriate energy, the electron can absorb a photon and later re-emit it. In this process, the emitted photon energy is boosted by the large momentum of the ions in the LHC, yielding a beam of high-energy gamma rays. This is the concept of a gamma factory, which passed its first hurdle during this MD week.