On 28 June for the first time in history, the LHC collided beams with 2556 bunches per ring 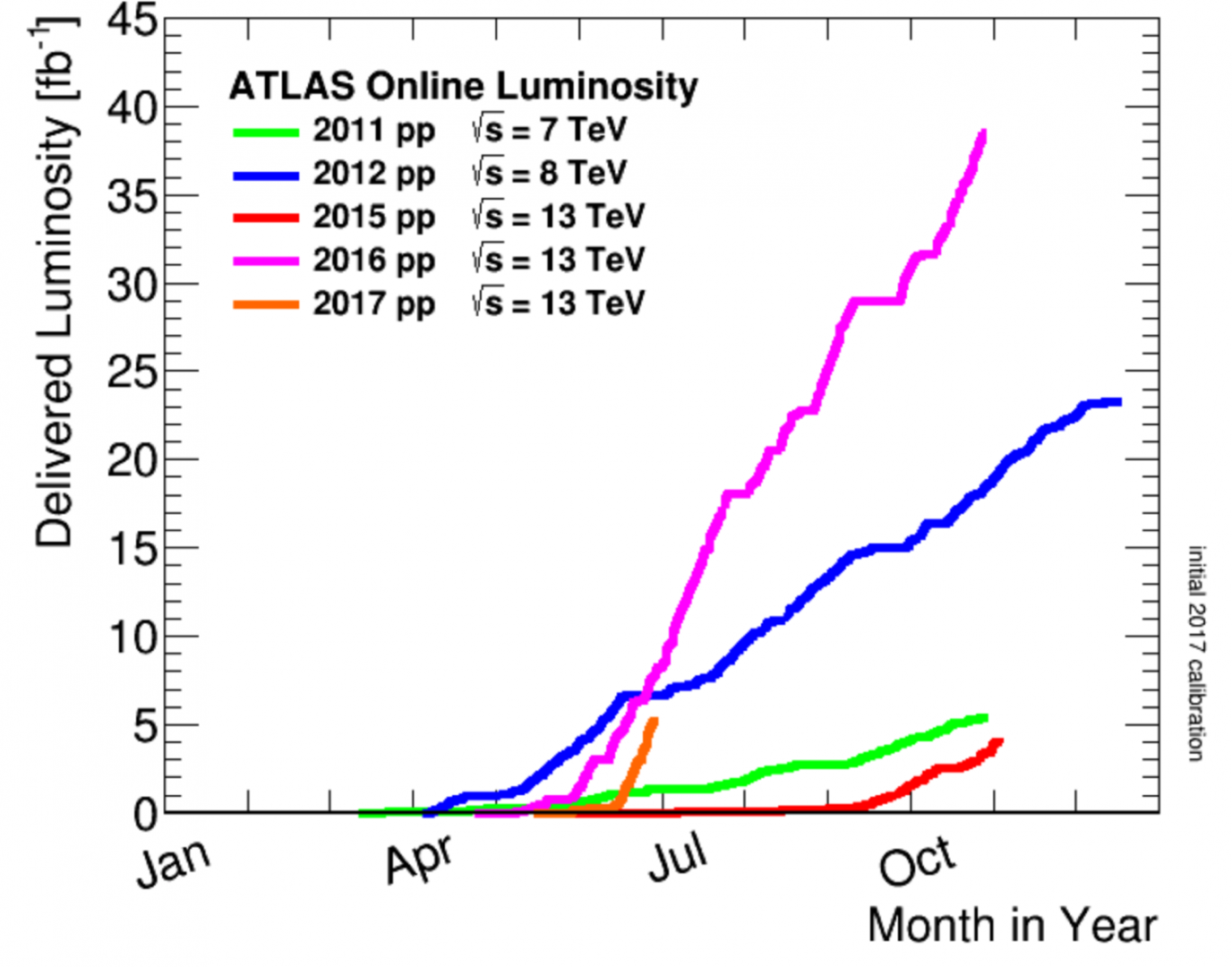 The integrated luminosity as a function of time for the different years of LHC operation. 2016 was a record year and although we did not yet accumulate much luminosity in 2017, it looks promising as the slope is the steepest of all years.

Now the skies have cleared for the LHC and the electron clouds have been reduced, the intensity ramp up continued, stepping up the number of bunches to 2556 bunches per ring, with a formal confirmation that the collider and its sub systems were functioning at each step. On Wednesday 28 June 2017, the two beams in the LHC collided, with 2556 bunches each. This is presently the maximum we can inject and bring into collision.

This has led to some new records for the LHC:

The target for the integrated luminosity in 2017 is 45 fb-1 and on the 28 June more than 6 fb-1 have been integrated by each of the general-purpose experiments ATLAS and CMS.

The standard LHC beam production and filling scheme foresaw 2808 bunches per ring with 288 bunches per injection from the SPS, and each bunch containing 1.15x1011 protons in a beam size of 3.5 micrometres. But, since 2016, a new beam production scheme called Batch Compression Merging and Splitting (BCMS) was developed, which is of much higher brightness. It still contains the 1.15x1011 protons per bunch, but the beam size is reduced to around 2.5 micrometres. When the beam density from the injectors increases, the number of collisions in the LHC also increases, hence the luminosity increase.

More dense beams also mean more energy per surface unit, hence this beam could potentially cause more damage to equipment in case that it is lost (for example, in the transfer lines between the SPS and the LHC). Because of this the maximum number of bunches is limited to 144 bunches per injection from the SPS. This, in combination with the gaps between batches for the injection kicker rise times, which was also optimised and brought down from 225 ns to 200 ns, results in the maximum of 2556 bunches per ring.

This week the LHC will not be filled with particles, but the tunnel will be occupied by many people performing maintenance on the machine and its subsystems, during this first one-week technical stop of 2017.

When the machine restarts after the technical stop, the aim is to consolidate the luminosity production with the maximum number of bunches. The next step is then to gradually explore the margins by increasing the intensity per bunch, hence pushing the luminosity even further.