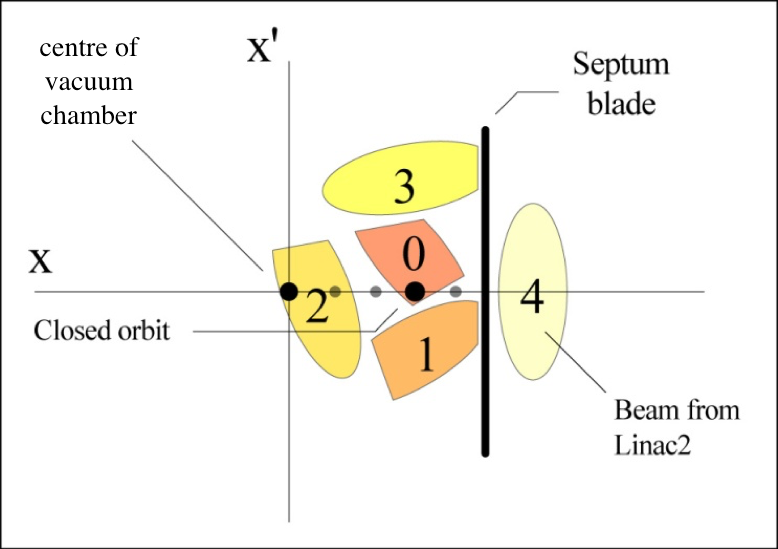 PSB multi-turn injection principle: to vary the parameters during injection with the aim of putting the newly injected beam in a different region of the transverse phase-space plan.

The LHC relies on the injector complex to deliver beam with well-defined bunch populations and the necessary transverse and longitudinal characteristics – all of which fold directly into luminosity performance. There are several processes taking place in the PS Booster (PSB) and the Proton Synchrotron (PS) acting on the beam structure in order to obtain the LHC beam characteristics. Two processes are mainly responsible for the beam brightness: the PSB multi-turn injection and the PS radio-frequency (RF) gymnastics. The total number of protons in a bunch and the transverse emittances are mostly determined by the multi-turn Booster injection, while the number of bunches and their time spacing come from the PS RF gymnastics. The emittance of a bunch is a combined measure of the transverse size and the angular divergence of the protons in a bunch. Smaller emittance means smaller beam size and, in this particular case, smaller beam sizes at the interaction points of the LHC and thus higher luminosity.

In providing beams to the LHC, the injectors have demonstrated remarkable flexibility, and on Saturday, 16 July the LHC made use of an imaginative beam production scheme called Batch Compression Merging and Splitting (BCMS), which offers significantly lower transverse beam size with respect to the nominal production scheme. Despite some blow-up in the LHC during the ramp, the BCMS beam gave an increase in peak luminosity of around 20% and a new record of 1.2 x 1034 cm-2s-1.

The beam coming from Linac 2 is continuous and is injected sequentially into each of the four PSB rings. For each ring, the injection time can be longer than the proton revolution time. It is by choosing for how many turns beam is injected from Linac 2 into the PSB that the total beam intensity per ring is controlled. To inject more than one turn of continuous beam, the process relies on varying parameters during injection, such as the position of the beam at the injection point or the field in the main bending magnets. The aim is to put the newly injected and circulating beam in a different region of the transverse phase-space (Figure 1). One consequence of such a process is that the more protons are injected, the larger the transverse emittance.

In order to obtain the 25-ns bunch spacing, a multiple of this value has to be found with the available PS RF harmonics: the PS has a length of 628 meters, giving a revolution time for the protons at 26 GeV of about 2.1 µs. The key harmonic to be reached is therefore H21. On H21, the bunch spacing will be 100 ns. Different RF harmonics are produced by the impressive range of RF cavities in the PS.

Until recently, the nominal scheme to obtain the LHC production beam has used batches of two PSB cycles injected in a single PS cycle. Six PSB bunches are injected in the PS RF harmonic 7 (H7). The empty bucket is necessary for the PS and SPS kickers rise times. These six bunches are each longitudinally split into three to reach H21 (Figure 2), then split in two, and again in two. This results in 72 bunches spaced by 25 ns.

From the discussion of multi-turn injection into the PSB, it can be seen that to reduce the emittance it would be good to inject fewer turns into the PSB rings. So, instead of taking six PSB bunches into H7, the PS takes eight bunches into H9. The total intensity needed is then equalised between all eight slots available in the two PSB cycles. Accordingly, the injected intensity per ring is reduced. Therefore, a new scheme had to be invented by the PS RF team to obtain the required LHC beam parameters from eight bunches instead of six: the BCMS injection scheme.

First, a compression is performed by incrementing the harmonic number from H9 to H14. Then, a bunch merging puts the harmonic number back to seven. From this point, the RF gymnastics are similar to the nominal beam, with the bunches split in three (Figure 3), then two and two again. The number of bunches produced is different from the normal scheme: eight bunches are merged into four, multiplied by three, two and two again. The result is 48 bunches spaced by 25 ns, which is less than the nominal 72 bunches. Therefore, the PS and SPS have to perform more cycles to fill the entire LHC, but the gain in transverse emittance leads to higher beam brightness.