Not only has the LHC reached its 2017 production target ahead of schedule, it has also doubled its design luminosity 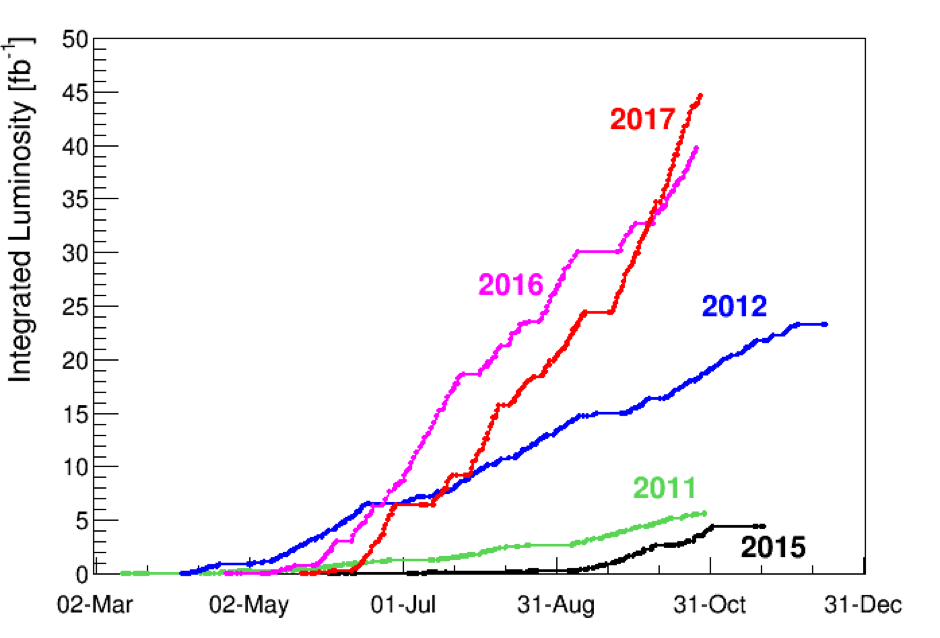 Multiannual overview of the integrated luminosity evolution. The 2017 line shows not only that the 45 fb^-1 target was reached and surpassed but also the fastest accumulation of all years.

On Monday, 30 October, the CERN Control Centre operators announced good news: the Large Hadron Collider (LHC) had successfully met its production target for 2017, delivering more than 45 inverse femtobarns* to the ATLAS and CMS experiments. This achievement was all the more impressive as it was ahead of schedule.

The LHC is continuing to provide physics data to the experiments. Yet, earlier this year, it seemed unlikely that this target would be achieved. An issue had developed in the interconnection between two magnets, collectively known as 16L2, which was affecting machine performance. Then, in early September, thanks to effective and creative collaboration between various teams at CERN, several ways to deal with the technical issue were developed, enabling the LHC and its injector chain to reach top performances again. In addition, by the end of September, the 2017 production run had been shortened by bringing special runs planned for 2018 forward to 2017, putting yet more pressure on the operators to deliver in a shorter time frame.

Nonetheless, with the target met, as well as another milestone achieved on Thursday, 2 November when stable beams were declared with a peak luminosity of 2.05 x 1034cm-2s-1, more than twice the design luminosity, the LHC has once again shown its excellence.

The 2017 physics run will end this year, with 15 days of special runs plus a machine development period before the winter shutdown begins on 4 December, one week earlier than initially scheduled. At that point, the year-end technical stop (YETS) will be used to help consolidate and improve the machine and the experiments, ahead of the restart in spring 2018, ready to try and increase the integrated luminosity to 90 fb-1, the goal set for 2017 and 2018.