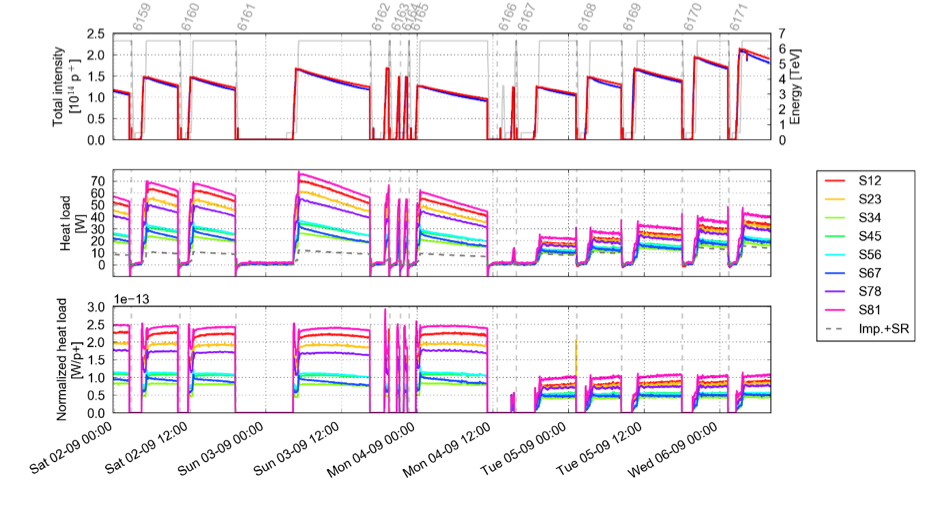 Evolution of the beam intensities (top), heat load to the cryogenic system (middle) and heat load normalised to the total intensity for the eight LHC arcs (bottom). ** (Image: G. Ladarola/CERN)

The "16L2" saga continues: as the last two LHC Reports explained, the LHC arc cell "16L2" has dominated recent discussions about the operation of the LHC. Since the beginning of the summer the majority of beam dumps have been initiated by local beam losses and beam instabilities associated with this part of the machine.

The mechanism that leads to the beam dumps is yet to be clarified. The current understanding is that air became trapped in that cell’s vacuum chambers during the Extended Year-End Technical Stop (EYETS), and an attempt to condense the gas on the 1.9K magnet cold bore by warming up the beam screen did not improve the situation.

The time structure of the beam losses suggests that a frozen particle of gas becomes detached from the chamber surface by the beam. The ice particle then falls into the beam where its interaction with the protons transforms it into gas. The subsequent interaction of the gas with the beam leads to beam losses and instabilities. Attempts to simulate such a configuration involving the protons of the beam, electrons and ionised gas are under way. Electron clouds produced by the densely packed LHC bunches are one of the mechanisms that may trigger such events, since the electrons in the cloud deposit energy on the chamber surface. Observations at injection were that such events were rare despite a very strong electron cloud, suggesting that another factor is needed to trigger a 16L2 event.

Last week, the standard LHC beam with a bunch spacing of 25 nanoseconds was replaced by a so-called "8b4e" beam. This acronym stands for "8 bunches" and "4 empty (slots)": instead of a continuous train of bunches spaced by 25 nanoseconds, this beam consists of mini-trains of eight bunches spaced by 25 nanoseconds and four empty bunch slots. This irregular beam pattern suppresses the formation of electron clouds compared to the standard beam. The price to pay is a lower number of bunches in the LHC due to the empty bunch slots. While the LHC operated with up to 2556 bunches in July, operation with "8b4e" limits the number of bunches to around 1920. As far as one can judge after a few days of operation with 8b4e, operation has become smoother with almost no dumps associated with 16L2 as long as the bunch population is not pushed beyond around 1.1x1011 protons. In this configuration, the performance is reduced but acceptable, which could see us through to the end of the year, towards the ambitious 45 fb-1 target for integrated luminosity for 2017.

**The reduction of the heat load with 8b4e (from Tuesday, 5 September) is clearly visible as a result of the much reduced electron cloud activity induced by the 8b4e beam.