LHC Report: setting up for the next season

The first collisions with stable beams were delivered to the LHC experiments on 23 May, after three weeks of commissioning with beams 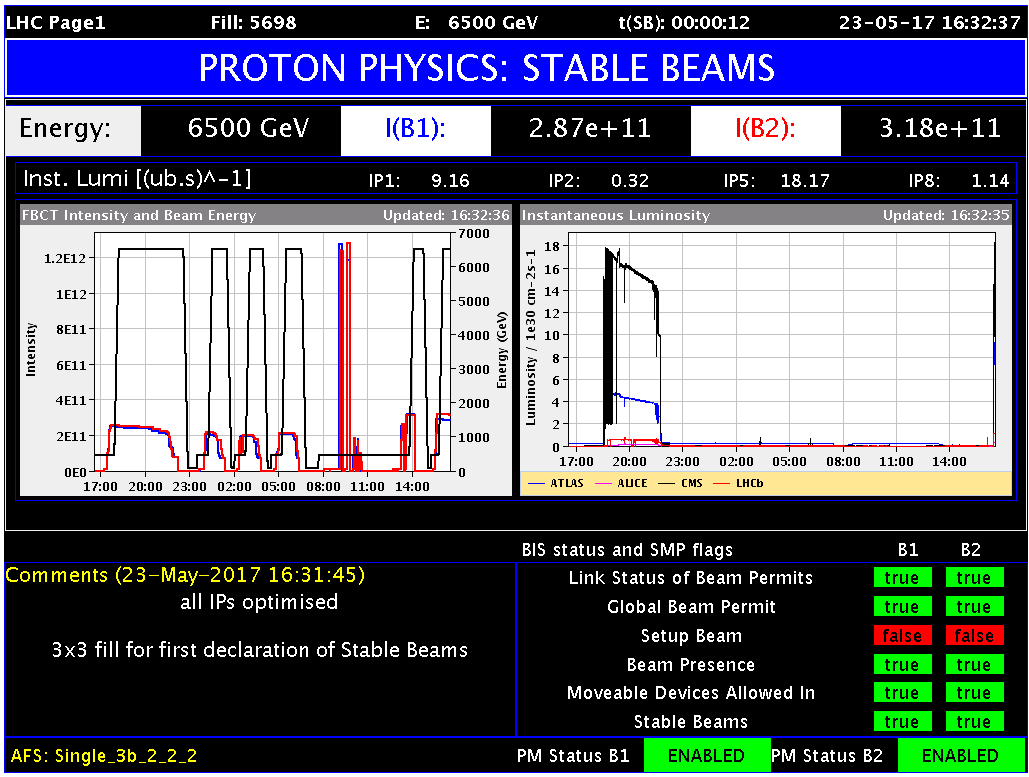 The first collisions with stable beams were delivered to the LHC experiments today, on 23 May 2017, with three bunches circulating in each beam. This marks the start of the physics run and the end of the first phase of LHC commissioning with beams, which started 3 weeks ago.

The LHC began running with beam for the first time in 2017 in the evening of Saturday, 29 April. For just over two hours, beams were circulating in both rings, kicking off various beam commissioning activities ahead of the upcoming run of the LHC.

From the moment of first beam, the various teams of the Accelerator and Technology Sector have been alternating day and night, seven days a week, to bring the LHC to the state where stable colliding beams can be delivered to the experiments for data-taking.

To give the teams involved in those activities time to rest and analyse the results, a few commissioning threads are being pushed ahead in parallel.

The first consists of preparing the LHC machine cycle from injection to collisions at 6.5 TeV. This activity is performed with so-called probe bunches of sufficiently low intensity that they pose no or very little risk to the machine equipment while new territory is being explored. Roughly 24 hours after first circulating the beams, one probe bunch per beam was successfully accelerated to 6.5 TeV.

A day later, on 1 May, the optics ‘squeeze’, an operation where the beam size is reduced at the collision points, was probed for the first time at 6.5 TeV. Over several cycles, the beam parameters and the beam optics are adjusted iteratively until they closely match the targets. Since the LHC is a very reproducible machine, this process is accelerated by reusing corrections established in previous years.

As one of the last steps, the beams are collided by switching off the magnets that keep them separated during injection, energy ramp and optics squeeze. Because the beams are very small compared to the alignment accuracies, the operation crews must ‘find’ the collisions by scanning the beams against one another until collisions are observed in the detectors.

In parallel to the cycle commissioning, more intense bunches are circulated at injection to setup the beam instrumentation, fine adjust beam steering and feedback systems that stabilise the beams in the vacuum chamber. The systems that protect against equipment failure and beam losses are tested at injection by provoking failures and verifying the correct reaction of the systems.

When bunches with nominal intensity, containing around 100 billion protons, can be circulated in good conditions and the cycle setup is finalised at injection and at 6.5 TeV, it is time to precisely align over 100 collimators and protection devices around the beam orbits.

In 2017, the primary collimator jaws that are closest to the beam will be only 1 mm away from the beam core. Orbit feedback and collimator movement systems must ensure that the distance between the beams and the jaws is stable to just tens of micrometres whenever the beams circulate in the two vacuum chambers. As a final validation of the collimation setup, probe bunches are deliberately shaken until they touch the collimators, while particle losses are recorded around the ring to verify that the collimation system intercepts more than 99.9% of the escaping particles.

After the start of the physics run, in the following days, the operators will interleave periods of fine adjustments and stable beams. They will also start the intensity ramp-up, accelerating the first trains of 12 bunches of protons per beam, foreseen by the end of this week.