These two last weeks have been a highlight of LHC operation, delivering record luminosity 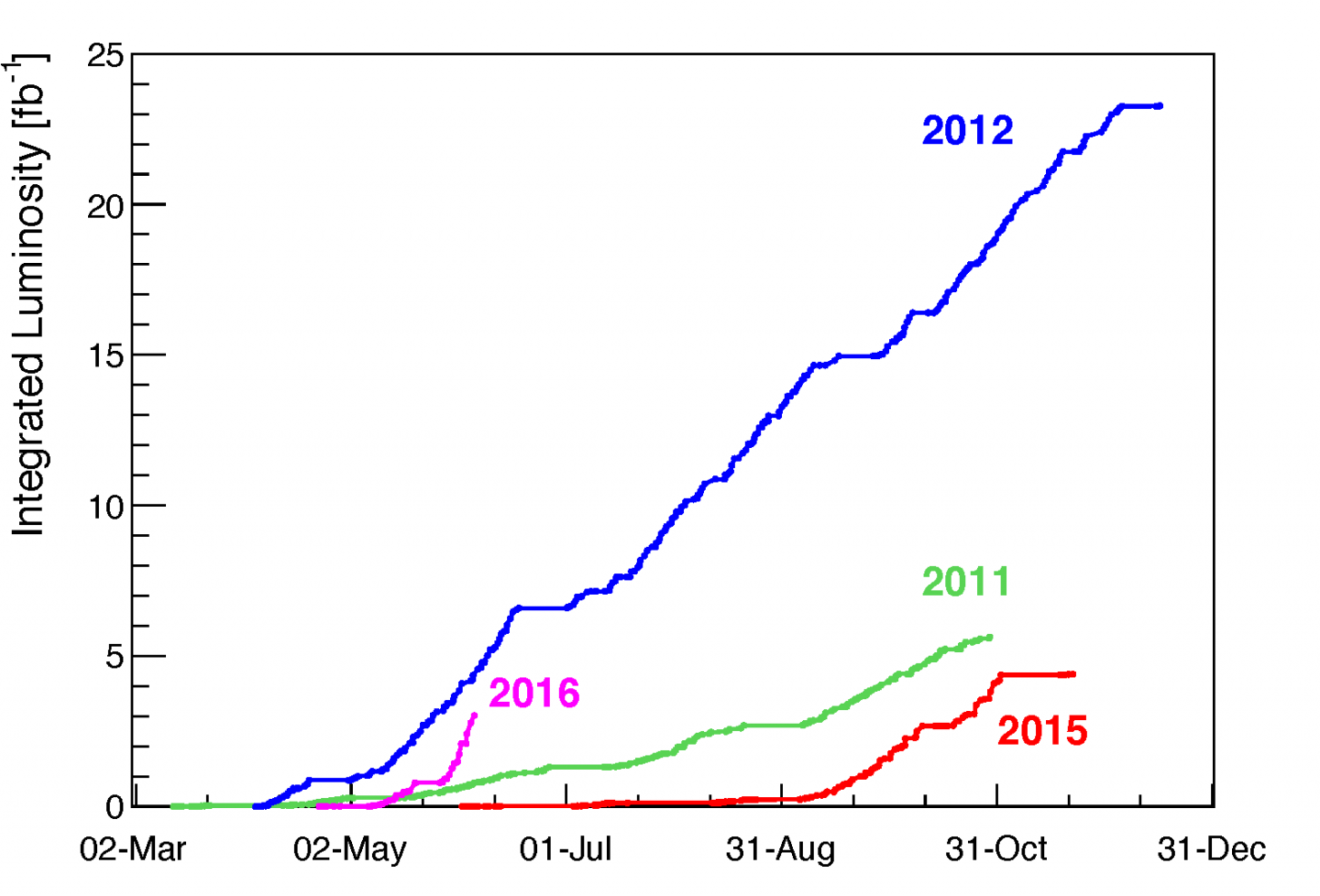 It’s been a record-breaking period for the LHC. On the evening of Wednesday, 1 June, the maximum number of bunches achievable with the current configuration, based on the injection of 72 bunches trains with a spacing of 25 ns, was reached. 2040 bunches were circulating in the machine. The rest of the week continued in a similar vein: the luminosity record at 6.5 TeV was broken with a peak luminosity of just over 8 x 1033 cm-2s-1, reaching 80% of the design luminosity. This was followed by a new record for integrated luminosity in a single fill, with 370 pb-1delivered in 18 hours of colliding beams. Finally, a third record was broken later in the week: with an availability for collisions of around 75% (the annual average is normally around 35%) and 6 long fills of particles brought into collision one after the other, around 2 fb-1 of luminosity were delivered during the week, breaking the previous record of 1.4 fb-1 in a single week established in June 2012.

These records follow the decision taken at the end of May to focus on delivering the highest possible integrated luminosity by the summer conferences, given the delays caused by the recent technical problems.

As a consequence of this decision, the first machine development period, in which machine experts carry out machine studies, has been postponed to allow luminosity production to be given priority until the first technical stop (TS1). Given the long stop caused by the problem with the PS main power supply, which had ended just the week before the decision was taken, it was also decided to reduce the length of the LHC technical stop from five days to two and a half days.

With 2040 bunches circulating in the machine, the heat load deposited on the LHC beam screens in the arcs reached 150 W per half cell (one quadrupole and 3 dipoles) in sector 12 (between ATLAS and ALICE), just below the maximum of 160 W that can be tolerated by the cryogenics system. Electron clouds induced in the vacuum chamber by the closely spaced LHC bunches are responsible for this heat load. With a new cryogenic feed-forward system in place to tune the beam screen cooling parameters according to the intensity stored in the machine and the beam energy, operation is now significantly smoother than in 2015. The waiting periods needed to allow the cryogenics system to stabilise before starting the energy ramp-up or the ramp-down after a dump have virtually disappeared as a result, significantly speeding up the machine cycle.

The technical stop finished on schedule around midday on Thursday, 9 June. It was followed by a number of fills with a low number of bunches to validate the machine set-up. The aperture and optics were measured and a full set of loss maps was performed. These confirmed that the machine is in good shape and ready for a sustained period of operation at high luminosity.