Linac 3 to carry argon for the first time

In preparation for a physics run in 2015, the source for Linac 3 is being adapted to carry argon ions 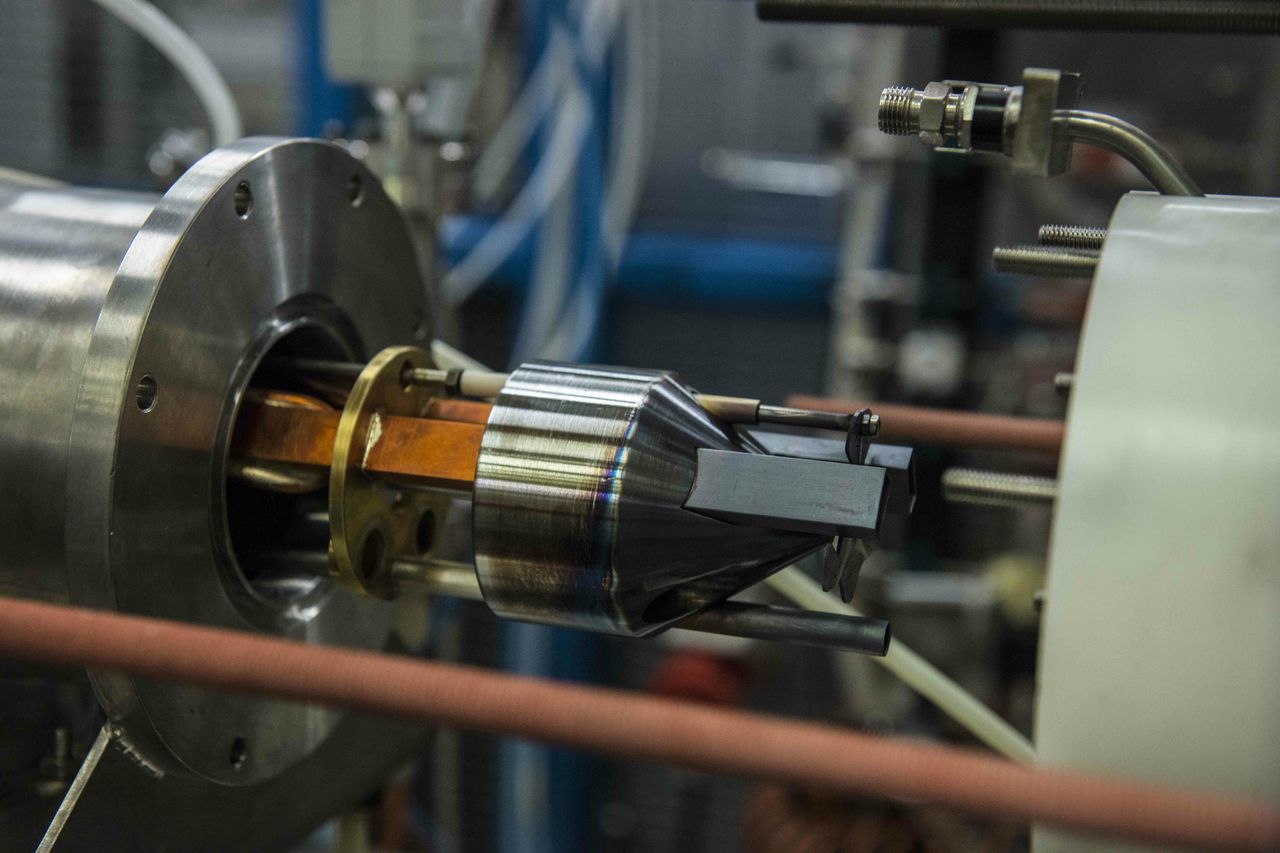 This apparatus injects microwaves which heat plasma inside the Linac source. It also inserts argon gas through the lower metal tube. The conical metal part shapes the magnetic field inside the source (Image: CERN)

CERN's accelerator chain has started its two-year shutdown, but physicists are already hard at work preparing the machines for physics beams in 2015.

The NA61/SHINE experiment in CERN's North Area searches for what is called the "critical point" of strongly interacting matter. In this search physicists vary the sizes and energies of interacting nuclei. Data for protons, beryllium ions and lead ions have been recorded so far. But now NA61/SHINE has requested beams for after the shutdown of a new element: argon. With these new beams the chance of discovering the critical point is the highest.

To get to the North Area, where NA61/SHINE and other fixed-target experiments are set up, the argon will have to cross the CERN site via a series of interconnected accelerators. The delivery chain starts at a machine called the "source" which feeds Linac 3, the linear accelerator that usually accelerates lead ions for the Large Hadron Collider (LHC).

Ion-source physicist Detlef Küchler is preparing the source to take argon. "After the lead run I ripped off all the parts inside the source that were coated with lead oxide," says Küchler. "This way, we have really clean starting conditions for argon."

Preparing the source for argon is easier than for lead, says Küchler. "With metal [lead ions] I have to control the oven temperature very precisely, and the conditioning takes a long time. With gas, in principle you open the gas bottle, switch on the source, and you have the beam."

Küchler will spend 10 weeks measuring the effects of argon on the source and the linac. One potential problem is that argon "sputters" easily: argon ions hitting the inside surface of the source can easily remove material. The ion-source team will check the source for signs of sputtering after four weeks of running and prepare spares for any damaged parts.

In the coming weeks, the team hopes to find stable settings for argon, and learn how much current of argon ions they can extract. "I'd like to have a complete set of parameters so the next time I am asked to deliver argon to experiments, I can set it up quickly and efficiently," says Küchler.

Next year, testing with argon will move on to the Low Energy Ion Ring (LEIR) and the section of the accelerator chain from the Proton Synchrotron up to the Super Proton Synchrotron, with a view to providing argon beams to the North Area in 2015.