After having accelerated a beam up to the design energy of 160 MeV, Linac 4 is now entering a new phase of its commissioning 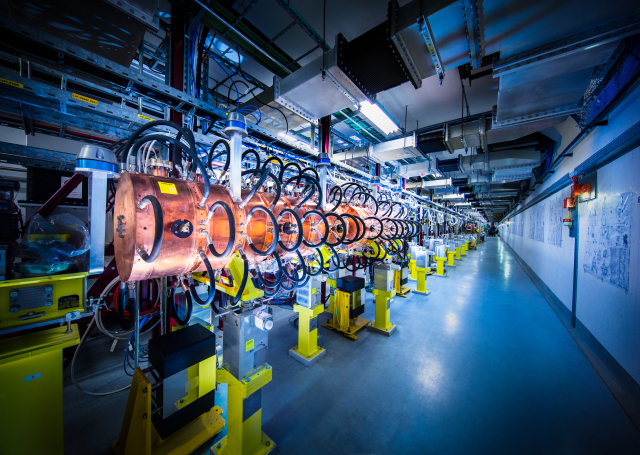 CERN’s new linear accelerator (Linac 4) has now accelerated a beam up to its design energy, 160 MeV. This important milestone of the accelerator’s commissioning phase took place on 25 October.

Linac 4 is scheduled to become the source of proton beams for the CERN accelerator complex, including the Large Hadron Collider (LHC) after the long shutdown in 2019-2020. It will replace the existing Linac 2 as the first link in the accelerator chain, which is currently accelerating protons to 50 MeV.

The new 86-metre-long accelerator will accelerate hydrogen ions – protons surrounded by two electrons – to 160 MeV, before sending them to the Proton Synchrotron Booster (PSB). Here, the ions are stripped of their two electrons to leave only the protons that will be further accelerated before finishing their race in the LHC.

Linac 4 is comprised of four types of accelerating structures to bring particles, over several stages, to higher and higher energies. These accelerating structures have been commissioned one by one: in November 2013, the first hydrogen ion beam was accelerated to the energy of 3 MeV, two years later the Linac 4 accelerator has reached an energy of 50 MeV – the energy Linac 2 runs at. Then, on 1st July 2016, it crossed the 100 MeV threshold. On 25 October 2016, Linac 4 reached its design energy of 160 MeV, after successfully putting into operation the 12 Pi-Mode Structures (PIMS) built in collaboration between NCBJ (Poland), FZJ (Germany), and CERN.

In the framework of the LHC Injector Upgrade programme, a dedicated team is now working on the next step: testing the Linac 4 transfer line equipment for injection into the PSB, which will be installed in the PSB during the second long shutdown starting in 2019.

Indeed, the future injection technique in the PSB is based on an innovative principle unprecedented at CERN for proton beams. To produce the high-brightness beams required for the High-Luminosity phase of the LHC (HL-LHC), the 160 MeV hydrogen ion beam from Linac 4 will be sent onto an extremely thin carbon foil that will strip off the two electrons. The stripped beam is then sent into a special injection chicane, which allows the proton beam to circulate while injecting the hydrogen ion beam. This technique is crucial for producing the brighter and higher-quality beams necessary for the HL-LHC, but also beneficial for other experiments that make use of the PS Booster proton beam.

To test this new technique, the thin carbon foil has been inserted in a temporary installation, the Half Sector Test, installed during summer 2016 in the Linac 4 transfer line. The Half Sector Test installation is used to test the complex equipment of half of the future PSB injection chicane.

The test facility commissioning has started right after the Linac 4 accelerated its first beam at 160 MeV and it will last until the end of March 2017. This installation will allow detailed tests of the equipment that will be installed at the injection point of the PS Booster during the second long shutdown (LS2).  At the same time, other different foil materials and diagnostics are being evaluated in a permanent installation in the Linac 4 transfer line, the Stripping Foil Test Stand that will remain in place at the end of the commissioning phase.