On Wednesday, 10 September, the last NA62 straw tracker chamber was lowered into position in the experiment 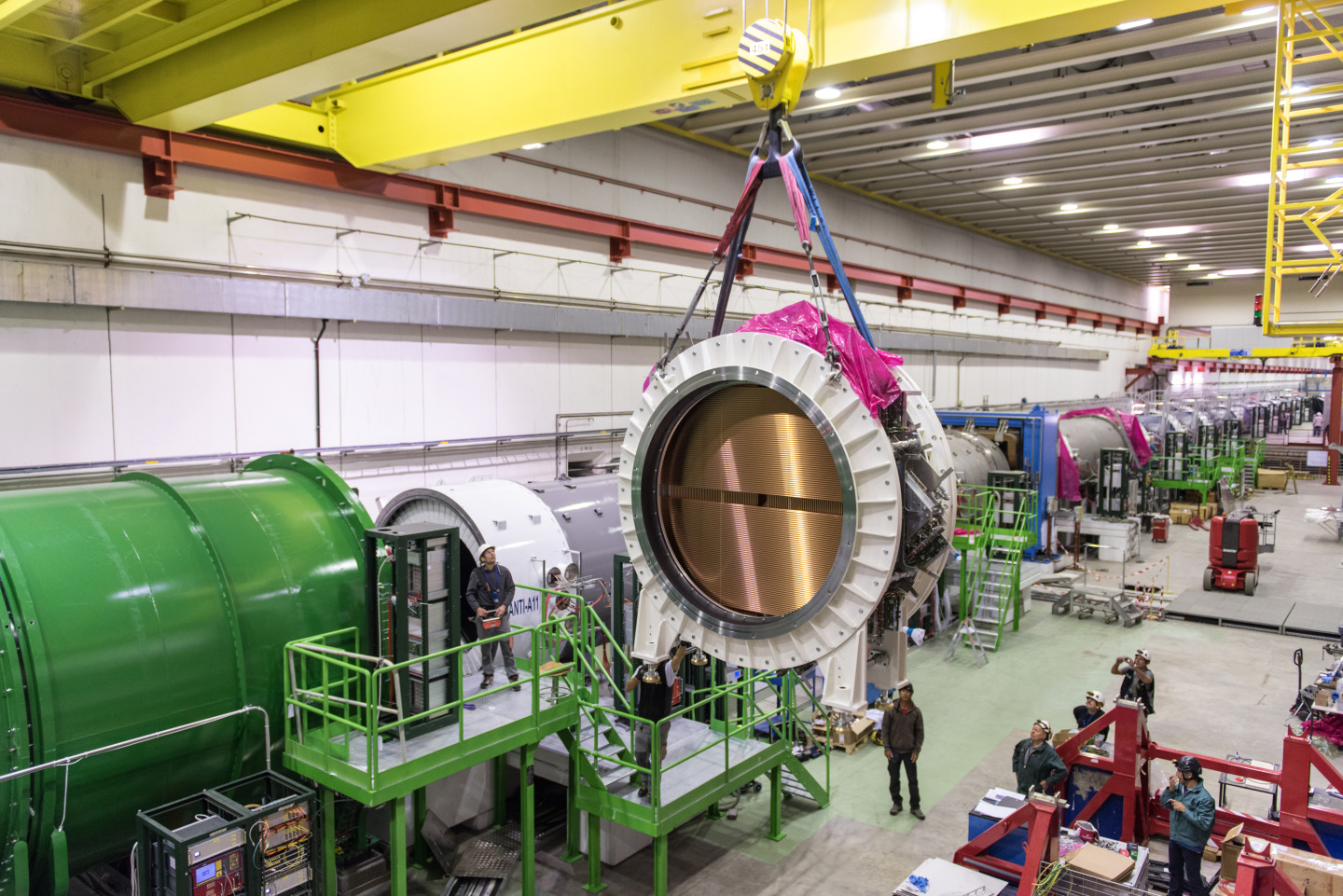 The final straw tracker module is lowered into position in NA62.

On Wednesday, 10 September, the last NA62 straw tracker chamber was lowered into position in the experiment. This feat brings almost 8 years of CERN construction and design to a close, as the tracker has gone from the drawing board to construction and installation.

The NA62 straw tracker is one of a kind. As the first of its scale to be placed directly into the vacuum tank of an experiment, it will allow NA62 physicists to measure the direction and momentum of charged particles with high precision. "From the first design to the final plug-in and testing, CERN teams have been 100% involved in developing this unique tracker," says Hans Danielsson, NA62 straw project leader. "We worked in close collaboration with the Joint Institute for Nuclear Research (JINR), Russia, who helped develop the straw tracker technology and will participate in the running of the detector now that construction and installation has been completed."

Each straw tracker chamber weighs close to 5,000 kg and is made up of 16 layers of state-of-the-art straw tubes. "Although heavy, the chambers carry highly fragile straw tubes," explains Neil Dixon, PH-DT. "Transporting them was a delicate operation, but it was carried out smoothly thanks to the excellent work by CERN's transport team." Each chamber was lifted onto a truck with 4.5 tonne suspension plates to ensure a smooth ride.

Once secured, the chambers began an hour-long journey to the Prévessin site, where they were then lowered down into the experiment cavern. "The straw chambers had to be placed to a 0.3 mm precision," continues Neil. "Together with the Survey team, the CERN transport team used highly accurate cranes to accomplish this."

The finishing touches are now being carried out on the 4 chambers, as the teams complete their work on the detectors they have spent so many years developing and assembling. "The chambers are now being equipped with the necessary gas connections, pipes, cables and dedicated read-out boards, developed by PH-ESE," says Hans. “On October 6 we will begin commissioning with beam, taking time to tune the tracker and learn its quirks before integrating it with the other sub-detectors to take physics data.”

As the period of construction ends and data taking begins, most of the straw tracker team will move on to other exciting projects. Meanwhile, the unique tracker they have created will provide NA62 with unprecedented insight into rare kaon decay rates.

While many LS1 stakeholders were attending the Chamonix workshop last week, activities in the LHC tunnel continued to progress.

The lengthy cool-down process is coming to an end in sector 8-1. Its cryogenic conditions will be known on Monday, 6 October for the qualification of electrical circuits at cold. All signals are green to start the cool-down of the 7th sector by the end of this week. Meanwhile, phase 1 of the powering tests remain ongoing in sector 6-7.

Unfortunately, a leak was observed in a water-cooled cable at Point 5, feeding the DFBX of sector 4-5. The cable has been removed for repairs and will be put back in place in a month's time, once cryogenic conditions allow.