A new acceleration system for the PS Booster 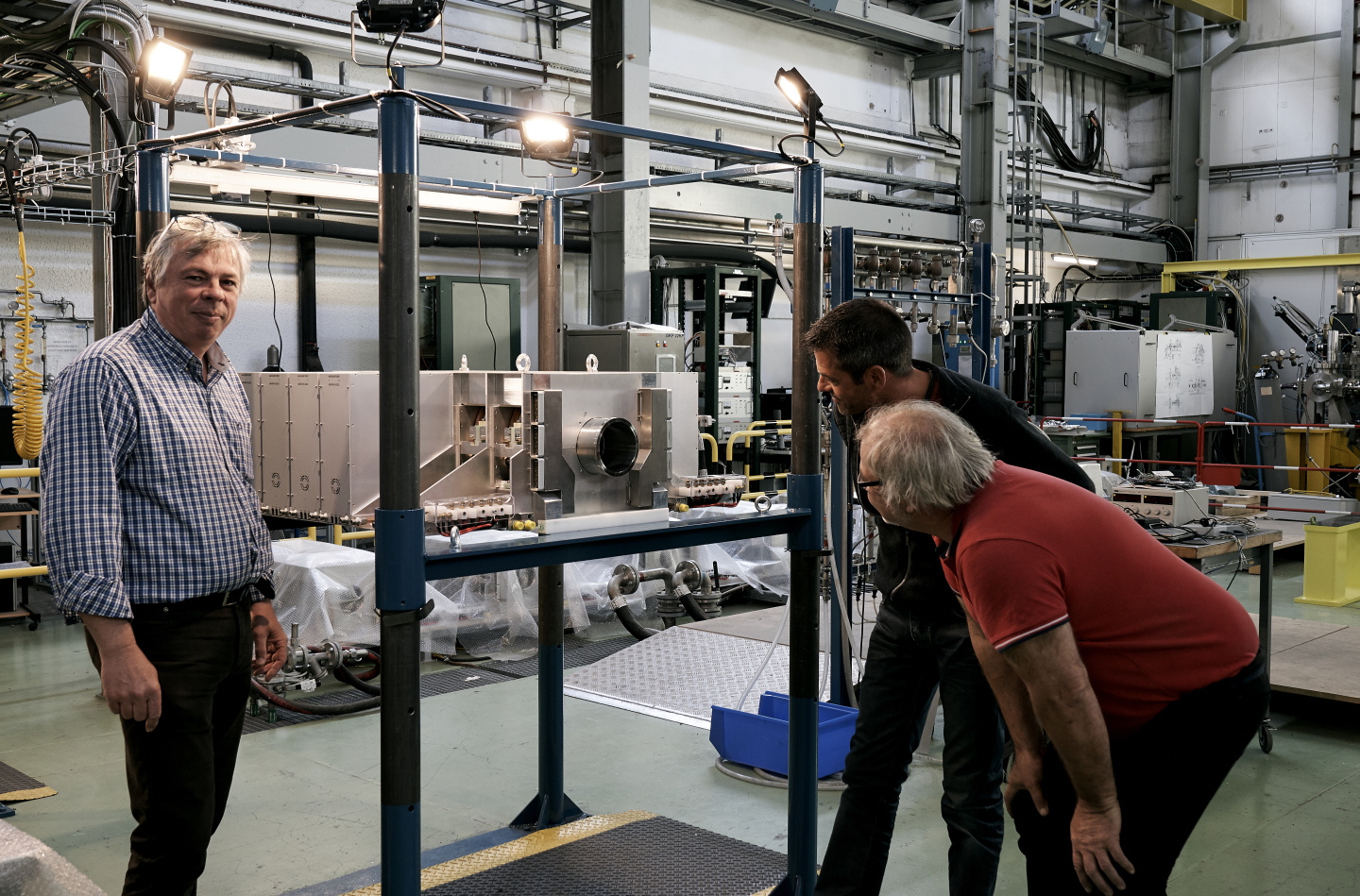 The refurbishment of the accelerator complex is under way in CERN’s workshops. The total replacement of the acceleration system of the PS Booster – the second link in the accelerator chain – is one of the major projects within the LHC Injector Upgrade (LIU) programme of work to ready the LHC injector chain for the High-Luminosity LHC upgrade. At the start of June, the teams celebrated an important milestone: the completion of the assembly of the first new-generation accelerating cavity. Another 27 cavities are currently in production. They will be installed in the accelerator during the Long Shutdown 2 in 2019-2020. Once they’re in place, the PS Booster will be capable of accelerating higher-intensity beams and at a higher energy of up to 2 GeV, compared with just 1.4 GeV today. The injector will be connected to the brand-new Linac4 facility at the same time.

The PS Booster’s new acceleration system is based on radio-frequency cavities built using a composite magnetic material called FineMet and developed by the Japanese firm Hitachi Metals. “The great advantage of this material is that it gives the cavities a wider bandwidth, from 0.6 to 18 MHz,” Mauro Paoluzzi, the project leader, explains. “A single cavity can cover all the required frequency ranges!” In a circular accelerator, at low energies, the frequencies of the accelerating cavities have to increase as the speed of the particles increases. The radio-frequency system is also used to manipulate the beam in various ways, which requires a wider range of frequencies. Currently, three different ferrite cavity systems are needed to cover frequencies from 0.6 to 18 MHz in the PS Booster, whereas the new cavities cover the entire range.

The project began in 2012 in the framework of a collaboration with KEK. The Japanese laboratory had already developed wide-band cavities for KEK and J-PARC and was cooperating with Hitachi Metals to develop magnetic alloys for the accelerators. KEK financed 132 of the 340 magnetic discs at the heart of the PS Booster’s new cavities, and was responsible for testing the components delivered.

The technology has been intensively tested at CERN. “A cavity of a similar type had been installed at CERN for the first time in 2004, in the LEIR, the Low-Energy Ion Ring,” Paoluzzi explains. “But we wanted to test it under real-life conditions in the PS Booster.” Two cavities were therefore installed in one of the four rings of the PS Booster in 2014 and tested in 2015. Following these conclusive tests and the publication of a report by an international group of independent experts, CERN Management gave the green light for the cavities to be used.

They were connected to new solid-state power amplifiers manufactured in Spain. Highly efficient low-level electronics, which ensure that the system can be used to its full potential, were developed at CERN. The vacuum chambers were built in Germany, while the other components came from France, Denmark, the UK, Turkey and Slovakia. The teams have started to assemble the remaining 27 cavities. All the components will be delivered to CERN by the end of the year.