Proton beams are back in the LHC 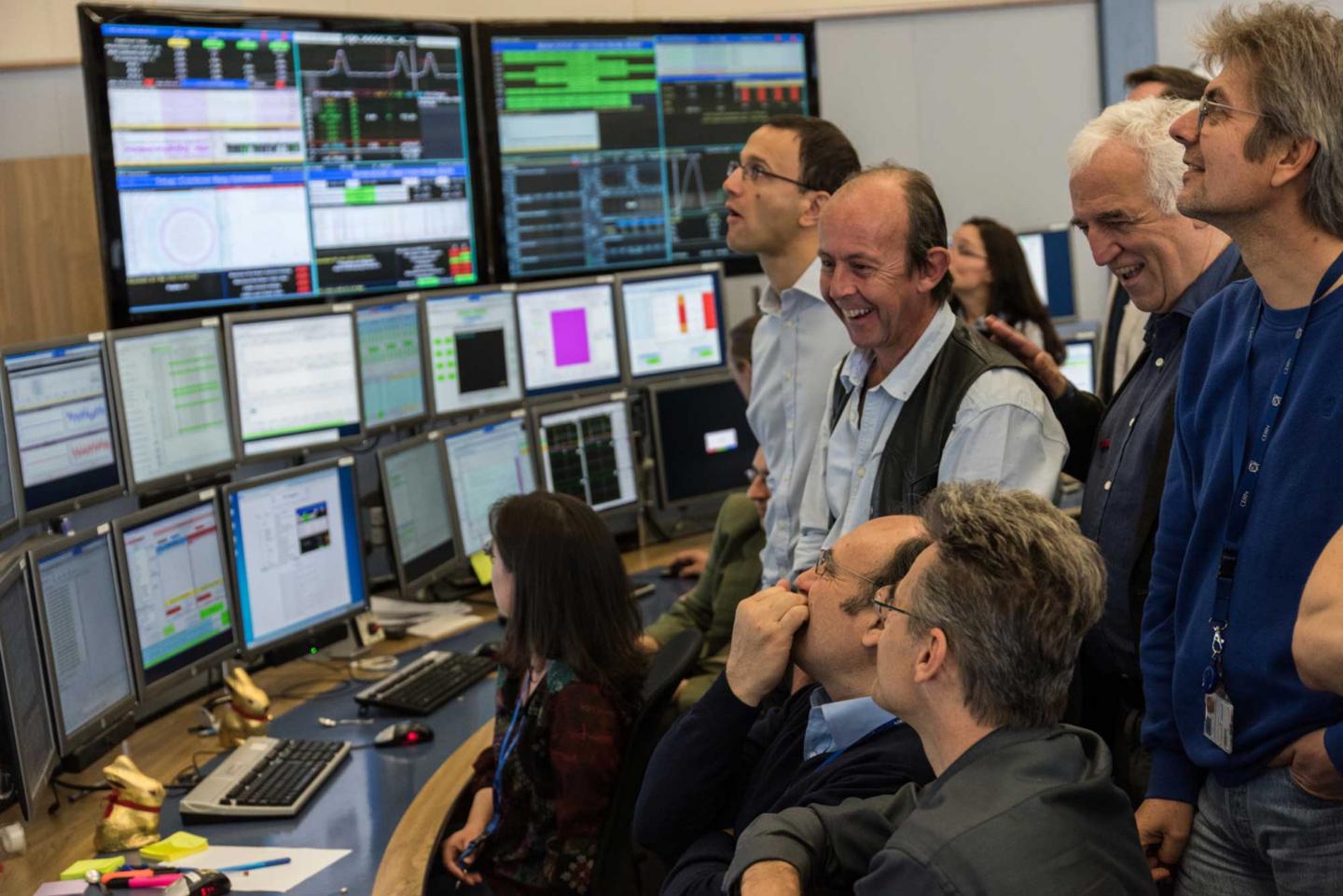 Happy LHC operators confirm circulation of Beam 2 at 10.41am - the first in the accelerator for two years (Image: Maximilien Brice/CERN)

After two years of intense maintenance and consolidation, and several months of preparation for restart, the Large Hadron Collider (LHC), the most powerful particle accelerator in the world, is back in operation. Today at 10.41am, a proton beam was back in the 27-kilometer ring, followed at 12.27pm by a second beam rotating in the opposite direction. These beams circulated at their injection energy of 450 GeV. Over the coming days, operators will check all systems before increasing energy of the beams.

"Operating accelerators for the benefit of the physics community is what CERN’s here for,” said CERN Director-General Rolf Heuer. "Today, CERN’s heart beats once more to the rhythm of the LHC.”

"The return of beams to the LHC rewards a lot of intense, hard work from many teams of people," said Head of CERN’s Beam Department, Paul Collier. "It’s very satisfying for our operators to be back in the driver’s seat, with what’s effectively a new accelerator to bring on-stream, carefully, step by step.”

The technical stop of the LHC was a Herculean task. Some 10,000 electrical interconnections between the magnets were consolidated. Magnet protection systems were added, while cryogenic, vacuum and electronics were improved and strengthened. Furthermore, the beams will be set up in such a way that they will produce more collisions by bunching protons closer together, with the time separating bunches being reduced from 50 nanoseconds to 25 nanoseconds.

"After two years of effort, the LHC is in great shape," said CERN Director for Accelerators and Technology, Frédérick Bordry. "But the most important step is still to come when we increase the energy of the beams to new record levels.”

The LHC is entering its second season of operation. Thanks to the work done in the last two years, it will operate at unprecedented energy - almost double that of season 1 - at 6.5 TeV per beam. With 13 TeV proton-proton collisions expected before summer, the LHC experiments will soon be exploring uncharted territory.

The Brout-Englert-Higgs mechanism, dark matter, antimatter and quark-gluon plasma are all on the menu for LHC season 2. After the discovery of the Higgs boson in 2012 by the ATLAS and CMS collaborations, physicists will be putting the Standard Model of particle physics to its most stringent test yet, searching for new physics beyond this well-established theory describing particles and their interactions.