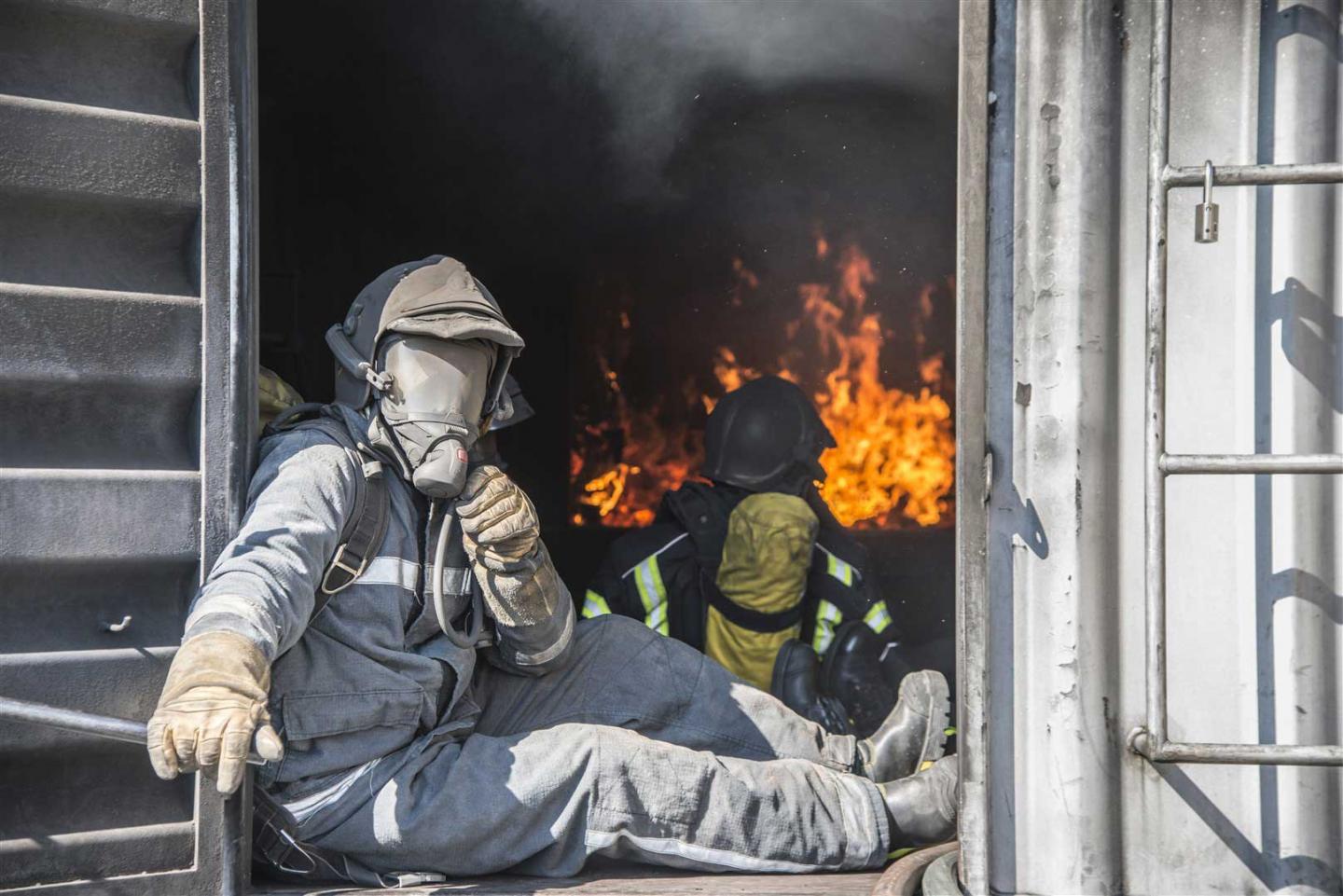 Firefighters sit patiently in the test chamber with fire raging around them (Image: Anna Pantelia/CERN)

It's 9.15am on Friday 5 July and a fire is building nicely in the CERN firefighters’ simulation chamber at the Prevessin training site. Five firefighters wearing prototype under-garments and heat and flame-resistant coveralls prepare to enter the inferno. One by one they take their seats in the blaze where they must remain for 15 minutes. Under their clothes they are wired up to an array of sensors that measure their heart rates, humidity levels and body temperatures.

Members of the CERN Fire and Rescue Service and the Swiss fire services are taking part in a series of experiments organized by the Federation of Swiss Fire Services (FSSP) to test out new materials for fire-resistant clothing.

Inside the chamber, temperatures begin to soar: 180°C at mid-height and up to 480 °C at ceiling level. Under the close scrutiny of their instructors, the five guinea pigs sit and wait. Once the 15 minutes are up, they are taken to an air-conditioned room at 22°C for 15 minutes of respite. But they aren’t allowed a drop of water, as this would skew the results. They then head back into the chamber to “cook” for another 15 minutes. A few minutes’ respite before going in for a second roasting (Image: Anna Pantelia/CERN)

At the end of the exercise, everything is weighed - socks, pants, stockings, glove liners, trousers etc. – to determine precisely how much water has been absorbed by each of the new equipment items. At these temperatures, the body loses several litres of water in a few minutes.

“This new equipment has been designed to allow the body to breathe without losing too much water,“ says CERN firefighter Heiko Clicque took part in the tests. "Firefighters in Switzerland and elsewhere are encountering safety problems with their coveralls, which are too hermetic and thus accumulate too much heat. This generates a sharp rise in body temperature which can cause loss of consciousness, with disastrous consequences.”

Ten firefighters took part in this series of tests in vivo that follow on from a first campaign at the Swiss Federal materials testing laboratory (EMPA) in Saint Gallen last spring. The same subjects underwent various exercises where they had to run inside a chamber heated up to 40°C with 0% humidity. The results of these experiments, which are the fruit of a broad interdisciplinary collaboration, are expected in September and will contribute to the development of new, improved equipment. This will be good news for firefighters and fire victims alike.