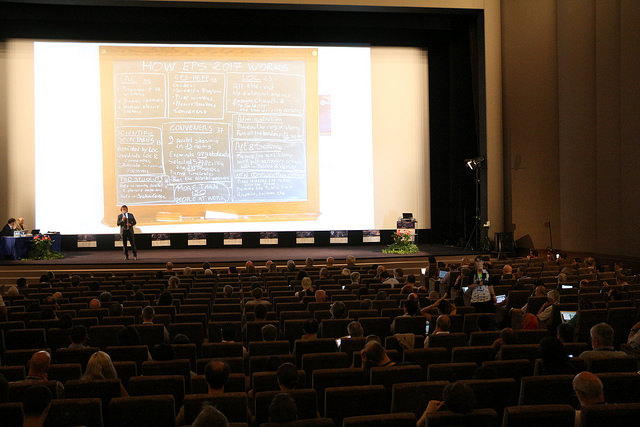 Many results are being presented at the conference for the first time (Image: EPS-HEP 2017)

The world’s particle physics community is meeting this week in Venice (Italy) for the EPS International Conference on High Energy Physics. Dozens of new results from the full existing datasets of the Large Hadron Collider experiments are being presented for the first time.

In the last two years, the LHC has been running like a Swiss clock, delivering large amounts of collision data to the experiments, beyond the best expectations. With more luminosity (number of collisions) and more data, physicists are now able to explore the most fundamental interactions between particles with unprecedented sensitivity and precision.

The new results presented at EPS include detailed studies of the Higgs boson. Five years after the announcement of its discovery, physicists are now beginning to look at this very special particle with a magnifying glass, and gaining deeper insight into the way it interacts with other particles.

“The level of precision achieved by the experiments with only a few percent of the total data sample expected from the LHC is impressive,” said CERN Director General Fabiola Gianotti. “Particularly relevant is the exploration of the way the Higgs boson interacts with other particles, as physics beyond the Standard Model may alter these interactions.”

The Standard Model makes very specific predictions of how the Higgs boson interacts with the various particles. The first observations of the Higgs were based on measurements of its decay into other bosons (W, Z, g). Now, the ATLAS and CMS collaborations show how the Higgs decays directly to fermions such as quarks and leptons, the family of fundamental particles that make up matter.

The ATLAS Collaboration has reported the first evidence for the decay of the Higgs boson to a pair of bottom quarks, with a significance of 3.6 sigma. Although the Standard Model predicts this decay to occur in more than half of all Higgs boson decays, it is very difficult to distinguish from similar background processes.

"This evidence of the decay of the Higgs boson to bottom quarks constitutes an important milestone in the exploration of the Higgs boson properties,” said Karl Jakobs, Spokesperson of the ATLAS experiment. “It is important for the understanding of its short lifetime and for seeking indirect evidence for other, rarer decays.”

Following the recent evidence for the Higgs boson decaying to two tau leptons, the CMS collaboration presented the first observation of this decay by a single experiment, with a significance of 5.9 sigma.

“This is of paramount importance to establishing the coupling of the Higgs boson to leptons and represents an important step towards measuring its couplings to third generation fermions, the very heavy copies of the electrons and quarks, whose role in nature is a profound mystery,” said Joel Butler, Spokesperson for the CMS collaboration.

Benefiting from the large data sample, LHC experiments can also test other properties of the Standard Model with higher precision. Thus, CMS presents the best measurement at the LHC of the weak-mixing angle, a key parameter of the Standard Model that establishes a firmly predicted relation between the masses of the W and Z bosons. The ATLAS collaboration also releases first evidence for an important but rare weak-interaction process in which a single top quark is produced together with a Z boson.

LHC experiments are also very active in the search of new physics beyond the Standard Model, and many new results for dark matter searches are being presented in Venice.

“So far we have been testing the simplest theoretical models of dark matter,” said CERN Director for Research and Computing, Eckhard Elsen. “We have now to investigate the more complicated scenarios, making the most of the precision that is now possible.”

High-level precision is also demonstrated for the strong interaction, as shown by the observation of a new particle with two charm quarks and a light quark, and in the increased precision in matter-antimatter asymmetry measurements achieved by LHCb, as well as in a wide range of results obtained from heavy ion collisions in all experiments. The ALICE collaboration notably presented one of the most precise measurements of the lifetime of the hypertriton, an exotic nucleus that contains a strange quark and is abundantly produced in collisions at the LHC.