Hélène Langevin-Joliot, physicist and granddaughter of Pierre and Marie Curie, will talk about her career in a traditionally male-oriented profession 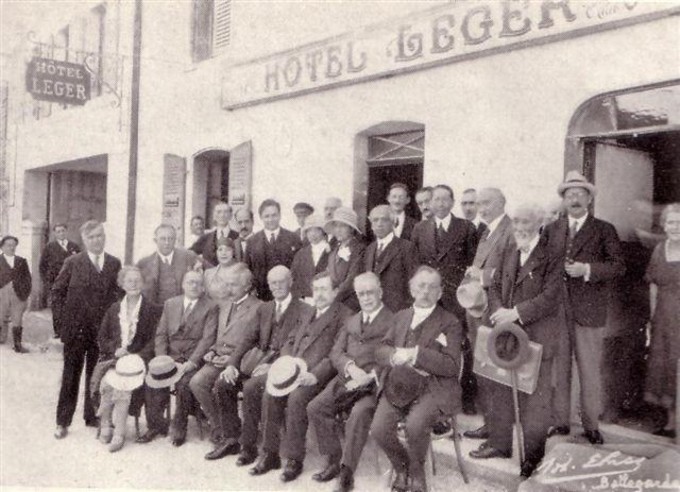 This lecture will also provide an opportunity to shed some light on the image above. In 1930, Marie Curie and Albert Einstein came for lunch in the Pays de Gex, at the Hôtel Léger in Thoiry. What were Curie and Einstein discussing with their colleagues?

Is there still a glass ceiling for women in science in 2017? At 8.30 p.m. on 29 June, CERN will welcome physicist Hélène Langevin-Joliot for a lecture at the Globe of Science and Innovation. Now the Emeritus Research Director in Fundamental Nuclear Physics at the CNRS in Orsay (France), she has witnessed the progress of women scientists throughout her long and very productive career.

From an eminent family of scientists (no less than four Nobel Prizes in Chemistry and Physics), and herself passionate about physics, she will talk about her career as a woman in a traditionally male-oriented profession. Langevin-Joliot, daughter of Frédéric and Irène Joliot-Curie and granddaughter of Pierre and Marie Curie, grew up in an extraordinary and intellectually stimulating environment.

To say that the Curie women were feminists would be an understatement. Her mother and grandmother, both pioneers in their fields, supported her ambitions from a very early age and encouraged her to fight for important causes, such as helping women to access scientific careers and increasing scientific literacy among the general public.

Hélène Langevin-Joliot lifts the veil a little ahead of her lecture:

What are you expecting from your visit to CERN?
I haven’t been to CERN for a long time. I’m expecting that this visit and the meetings I will have while I am here will provide me with an opportunity to enrich my scientific and cultural knowledge. I’m also looking forward to seeing how CERN is developing its initiatives to inform the general public about science.

When you were young, did you rebel against the pressure of your historically famous family?
I wasn’t tempted to rebel as a child or a teenager, and not even as a young woman after the war. The pressure wasn’t as great as you might think: the media scrutiny that exists today didn’t exist or at least wasn’t as extensive and was very rarely focused on science and scientists. With the approach of war, followed by the occupation and then the liberation, people had enough to think about.

Why did you choose physics? Was it your first choice?
At school, I was only really passionate about solving maths problems. I found physics boring, too much about applying rules. But my mother got hold of some “experimental” equipment for me and that was how I began to enjoy doing a bit of physics and chemistry, and chose to focus on those subjects.

From your point of view, how have women made progress in science since the beginning of your career?
After the war, when I started at the CNRS, the laboratories had to be built up from scratch. We had a huge amount of catching up to do in nuclear physics and those involved “already” included about 25% women, which was a lot at the time. Later on, I was struck by the virtual absence of women at international colloquia, except for those from some Latin or Scandinavian countries. In France, the disparities between the different disciplines became clear to me, as well as the effects of the glass ceiling. Then the issue of gender equality took on a new significance, with new generations of women becoming more conscious of discrimination.

The lecture will be held at 8.30 p.m. on 29 June at the Globe of Science and Innovation (Meyrin). The lecture will be in French with simultaneous interpreting into English. Entry is free of charge but registration is mandatory. The event is being organised by the Visits and Local Relations team from the Education, Communication and Outreach group, in collaboration with the Écho du Reculet de Thoiry newspaper.