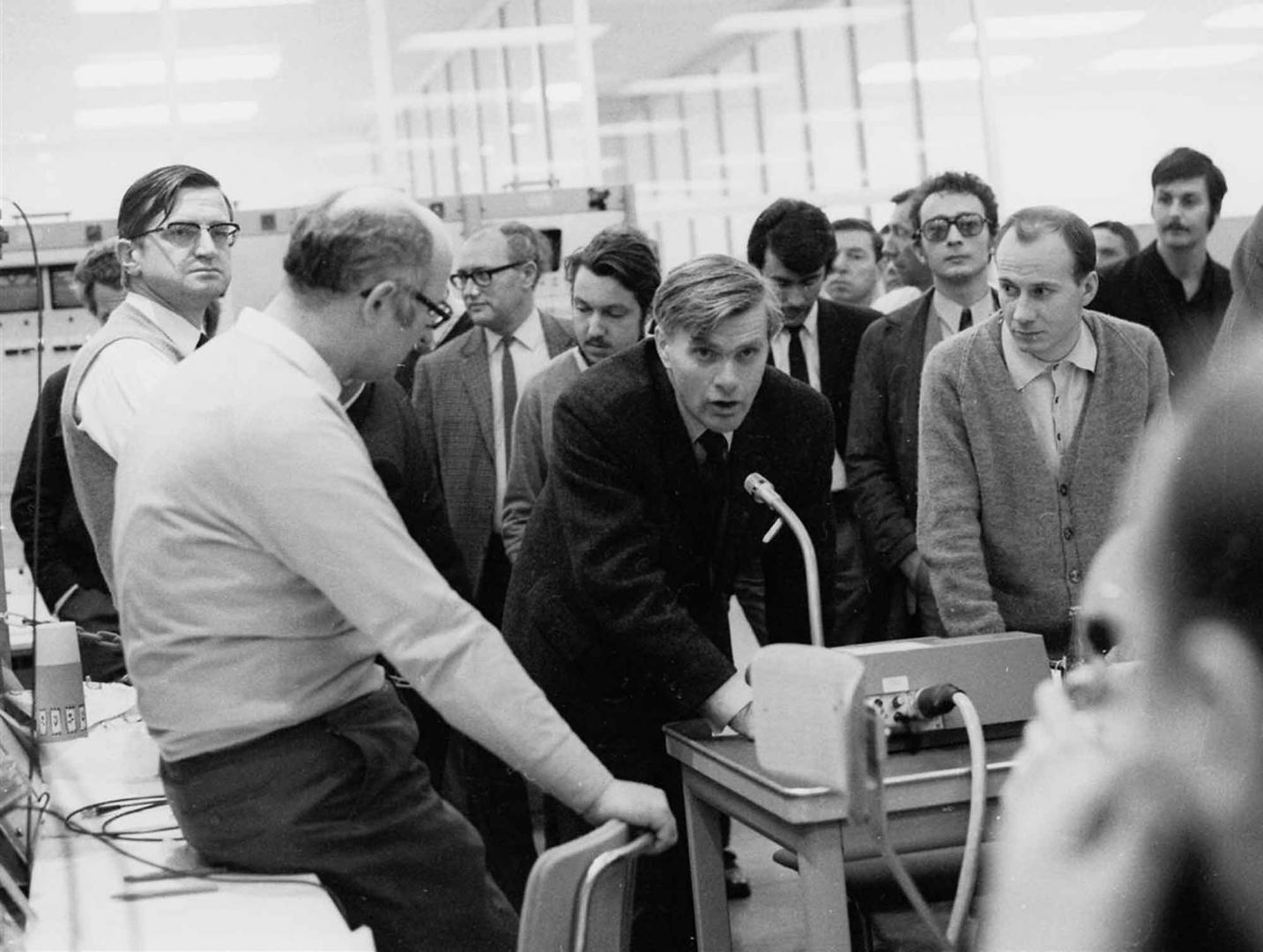 On 27 January 1971, Kjell Johnsen, who led the construction team which built the Intersecting Storage Rings (ISR), announced that the first ever interactions from colliding protons had been recorded (Image: CERN)

This article originally appeared in the CERN Courier, Volume 54, Issue 1.

On 27 January 1971 colliding beams were achieved at the Intersecting Storage Rings (ISR) for the first time.

On 25 January Ring 2 was brought into action. [Ring 1 had been successfully tested in October (see CERN Courier November 2013)]. At 7.47pm the first beam of protons from the Proton Synchrotron (PS) was injected, went round and stayed going round, 3.5 mA circulating. At 8.20pm, 15 mA were injected and the radriofrequency accelerating cavities were brought on. At 9.20pm stacking was tried and the circulating current built up to 370 mA. At 10.32pm the peak current of 720 mA was stacked.

On 27 January, it was decided to go for colliding beams. The run began at 10am. Shortly after mid-day a very clean stack built the current in Ring 1 to 930 mA. After a few minutes, this dropped abruptly to 586.6 mA but didn't change for more than an hour. At 2.30pm, well over two hours later, the monitors were reading 586.5mA, proving that they hadn't got stuck. So good were conditions in the ring that hardly a measurable proton was lost. The decay rate was 5 × 10-8 per second corresponding to a half-life of many months. One wisecrack was that the ISR had made itself independent of PS shutdowns.

Meanwhile an even more significant event occurred. At 1.26pm a single shot from the PS was fired into Ring 2 and 14.7 mA were left circulating. The one remaining worry was that the big beam in Ring 1 would cause serious loss on the small beam in Ring 2. No such noticeable beam-beam interaction was observed. The last remaining fear of the ISR team, that they would not be able to deliver a usable machine for physics, was swept aside.

Close on top of this came the news from the physicists at the intersections. At first tentatively, then with confidence, they fed to the control room the information that they were recording particles coming from collisions in the intersecting beams. At about 1.40pm Kjell Johnsen moved to the microphone to announce the first ever observation of proton-proton interactions in colliding beams (see image above).

Compiler's note: The ISR was shutdown in 1984, as CERN shifted its sights to the Large Electron Positron collider