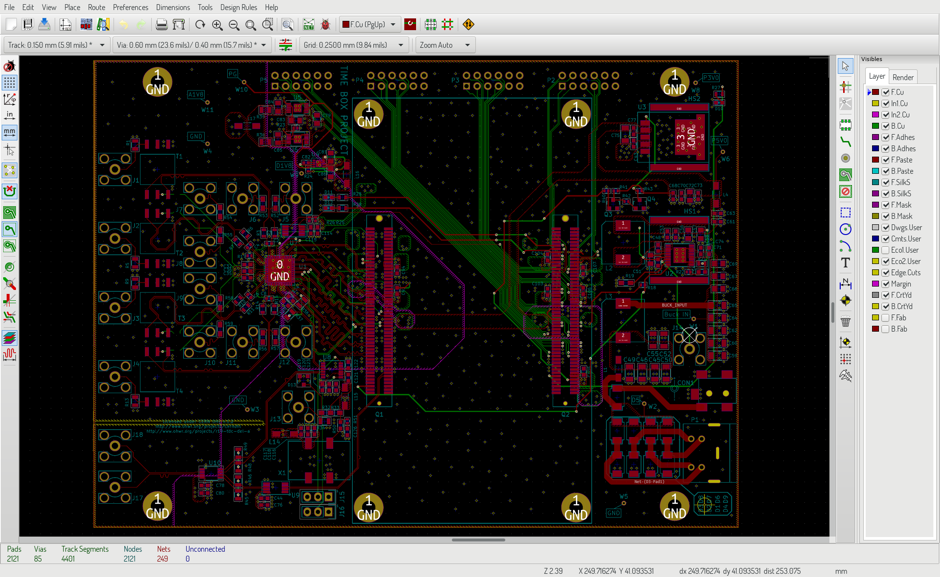 A screenshot showing a layout of an analog-to-digital converter board (Image: Maciej Suminski/CERN)

Sharing designs and information around the world is one of CERN’s key philosophies, and one small group in particular has spent five years contributing to the development of KiCad, an efficient tool for designing open-source hardware.

Created 25 years ago at the Grenoble Institute of Technology, today KiCad evolved to the most popular free and open-source software for the design of printed circuit boards (PCB), allowing electronics engineers from different laboratories around the world to share their designs.

Tomasz Włostowski, Maciej Sumiński and Javier Serrano, members of CERN’s beams department, joined the KiCad community five years ago and have been contributing to the development of the software ever since.

The financial contributions the team receive through the CERN & Society Foundation, as well as the dedication of the team developing the software, have been crucial to its success (the Foundation’s annual review for 2016 shows individual online donations funded more than 130 hours of development on various work packages).

This support, as well as the hours of hard work, meant the group was able to build in many new, useful features to the software. One of them is the integrated simulator support, which allows users to run a simulation after completing the design, to verify that their circuit board works as they expected.

“Another thing we accomplished thanks to the Foundation’s support was to make a unified geometry library. This is an engine calculating the proper distance between tracks and zones on the printed circuit board. Thanks to that, we now hope to improve the design rules checker, so that we can use more complex tools to define what is valid for a board,” explains Tomasz.

A lot of work has also been put into remaking the KiCad engine. This is ‘under the hood’ work that is  not directly visible for the users, but is essential for maintenance and future improvements of the program. Currently more work is being done on what users actually see. “Soon we will start working with professional designers. The goal is to get their feedback to find out which parts of KiCad should be improved,” explains Maciej.

The team will also take the symbol and component libraries that have been developed at CERN for other tools and convert them to a format suitable for KiCad. “The CERN library symbols are used to draw schematics and footprints. They represent the physical circuit board components, like chips and resistors. Implementing them in KiCad will be a huge boost for the community because they were designed by the CERN technical drawing office so are of extremely high quality.”

If you want to join the effort to enhance KiCad, and to ensure that design and development knowledge flow more freely, you can help by making a donation to the CERN & Society Foundation.

CERN joins with leaders from research and ind...

Computer Security: How to avoid being disturb...