KiCad software gets the CERN treatment 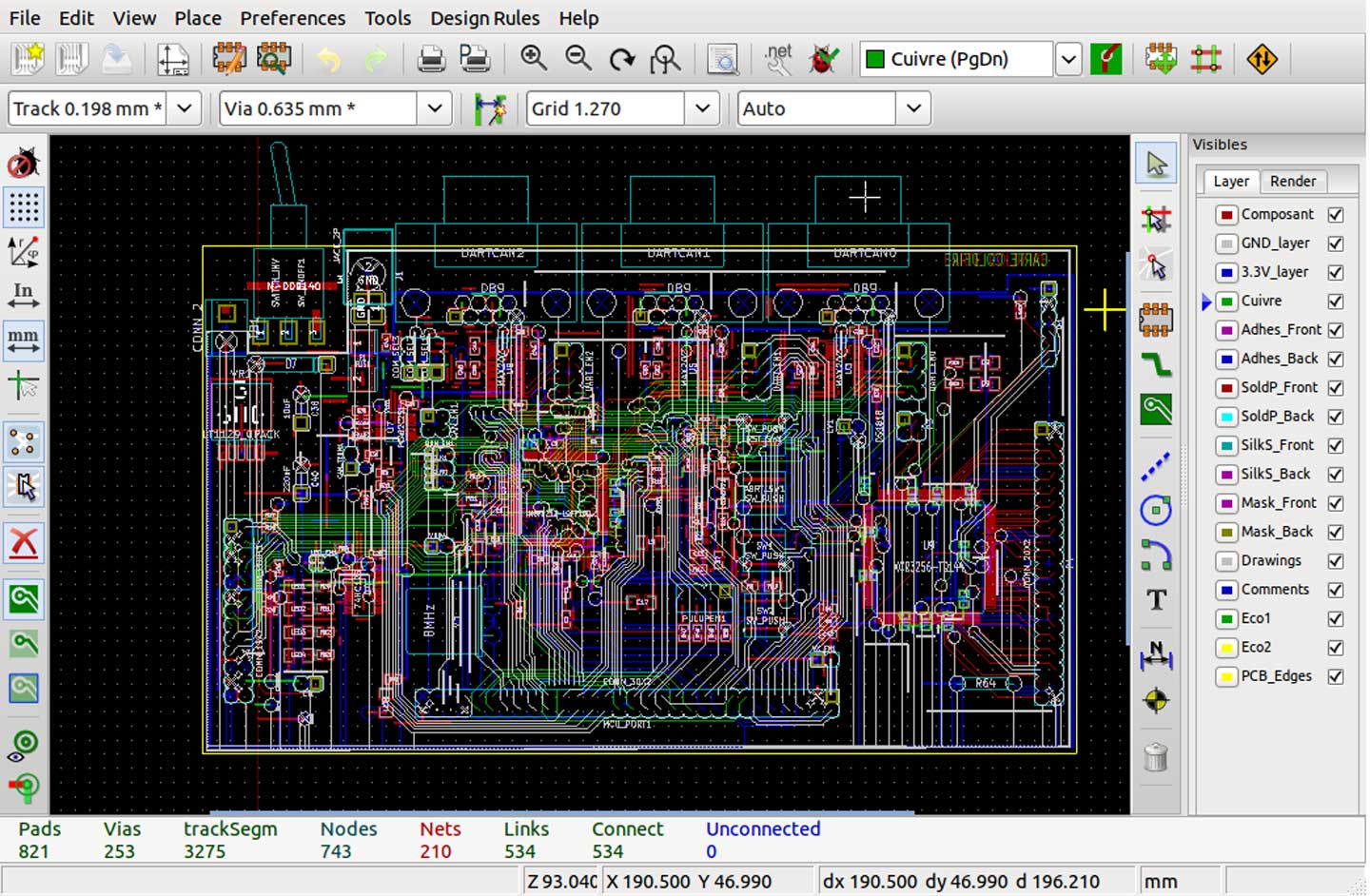 Detail from a KiCad screenshot showing a design for a printed circuit board (Image: KiCad)

Printed Circuit Boards (PCB) are the heart of any electronic device, from toasters to smartphones. But so far, the engineers who design the boards often have had no option but to use proprietary tools. That's about to change: CERN experts are adapting the open-source software KiCad to make it an efficient tool for designing open-source hardware. This free software makes it easier for electronics engineers to share their designs.

KiCad development began in 1992. The software – which runs on the computer-operating systems GNU/Linux, Windows and Apple OS X - creates schematics for printed circuit boards with up to 32 copper layers with additional technical layers. Since 2013, experts in the CERN Beams department have made important contributions to KiCad as part of the Open Hardware Initiative (OHI), which provides a framework to facilitate knowledge exchange across the electronic design community. “Our vision is to allow the hardware developers to share as easily as their software colleagues,” says Javier Serrano, head of the BE-CO-HT section and OHI initiator. “Software sources are easily shared online because they are text files and everyone has access to editors and compilers that turn the sources into a program. On the other hand, in the case of hardware design, most of the time this is done using proprietary tools. Therefore, in order for people to modify the sources, they need to use those proprietary tools.”

When the KiCAD project started at CERN, many free tools were already available to hardware designers but none was easy enough to use when designing a complex circuit. Among them, KiCad showed the best potential. “We started by cleaning the basic code and introducing a new graphical engine,” says Tomasz Wlostowski, a member of the BE-CO-HT section who, among other things, is in charge of supervising the development of new features for KiCad. “With our contribution, we aim to develop KiCad up to a point where it becomes the de facto standard for sharing, and more and more users, including corporate ones, start working with it.”

Next week, the team is going to release two new features that many in the free/Open Source EDA community have been asking for: differential pair routing and trace-length matching. “Thanks to the new differential pair routing, you can more easily design PCBs that support fast signals over a long distance and with less noise. This is particularly important for devices that deal with great amounts of data,” says Wlostowski. “The second tool – length matching – automatically ensures that two signals take exactly the same time to cross the PCB.  When the feature is selected, the tool automatically adds meanders to adjust the delay. This is very useful when timing and synchronisation become important parameters to take into account.”

The recent developments are giving KiCad a considerable boost. “KiCad is also becoming interesting for specialised companies, which can use it to develop new electronic components. They could also be potential donors for the project,” says Serrano. Indeed, Raspberry Pi and Arduino have already donated to the CERN KiCad initiative. You can join the effort to enhance KiCad and make it an efficient tool for PCB design by making a donation via the CERN and Society website.