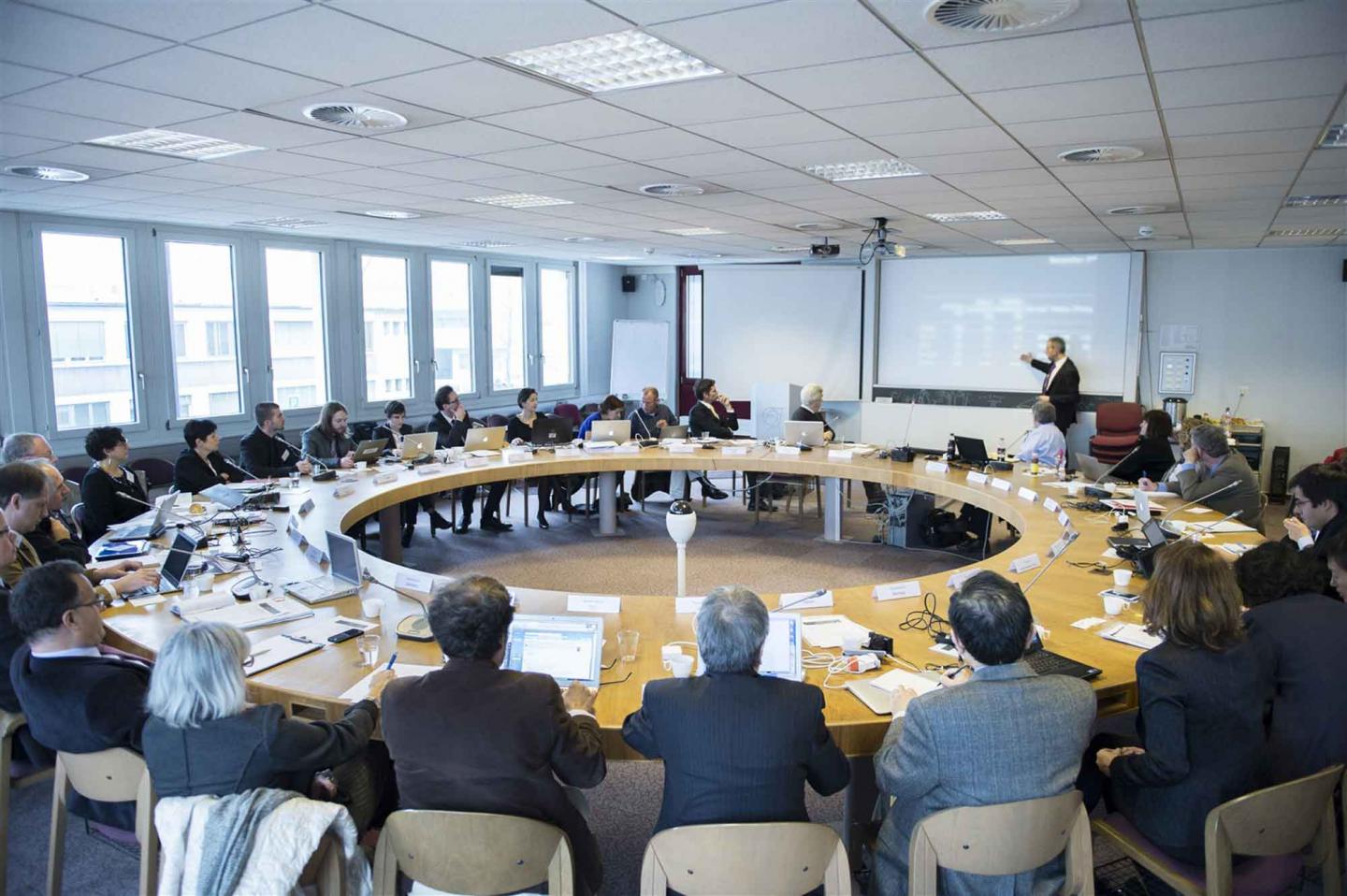 Members of the Sponsoring Consortium for Open Access Publishing in Particle Physics (SCOAP<sup>3</sup>) in talks at CERN this week (Image: Anna Pantelia/CERN)

CERN can today confirm that the Sponsoring Consortium for Open Access Publishing in Particle Physics (SCOAP3) will start on 1 January 2014. With the support of partners in 24 countries, a vast fraction of scientific articles in the field of high-energy physics will become Open Access at no cost for any author: everyone will be able to read them; authors will retain copyright; and generous licenses will enable wide re-use of this information.

Convened at CERN this is the largest scale global Open Access initiative ever built, involving an international collaboration of over one thousand libraries, library consortia and research organizations. SCOAP3 enjoys the support of funding agencies and has been established in co-operation with leading publishers.

Eleven publishers of high-quality international journals are participating in SCOAP3. Elsevier, IOP Publishing and Springer, together with their publishing partners, have been working with the network of SCOAP3 national contact points. Reductions in subscription fees for thousands of participating libraries worldwide have been arranged, making funds available for libraries to support SCOAP3.

“International cooperation and dissemination of information have been enshrined in the CERN Convention for 60 years,” says CERN Director-General Rolf Heuer. “I am proud that we have leveraged CERN’s convening power and made such an unprecedented Open Access initiative a reality. I am indebted to all those leaders in libraries, funding agencies, the publishing industry who have accompanied us on this path. This is their success, and we look forward to welcoming more collaborators to this global initiative."

“This is the culmination of a fascinating journey,” says Salvatore Mele, Head of Open Access at CERN and leader of the SCOAP3 project. “In the last few years we have built consensus and trust between all parties: libraries, funding agencies and publishers, at the service of scientists in the field of high-energy physics and beyond. Most importantly, we have nurtured a community of partners, making a real difference, enhancing the Open Access movement and the publishing industry.”

SCOAP3 grants unrestricted access to scientific articles in scientific journals, which so far have only been available to scientists through certain university libraries, and generally unavailable to the wider public. Open dissemination of preliminary information, in the form of pre-peer-review articles known as preprints, has been the norm in high-energy physics and related disciplines for two decades. SCOAP3 sustainably extends this opportunity to high-quality peer-review service, making final version of articles available, within the Open Access tenets of free and unrestricted dissemination of science with intellectual property rights vested in the authors and wide re-use opportunities. In the SCOAP3 model, libraries and funding agencies pool resources currently used to subscribe to journals, in co-operation with publishers, and use them to support the peer-review system directly instead.

The SCOAP3 initiative looks forward to establishing further partnerships in the Asia-Pacific region, the Americas, Europe, Africa and the Middle East, where scientists will enjoy the advantages of Open Access and many libraries and library consortia will benefit from reductions in their subscription costs.