Crab cavities get into their shells 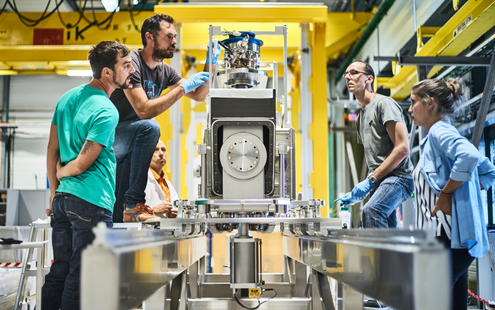 Members of three departments – Engineering, Technology and Beams – performing final checks on the crab cavities before they are installed in their cryostat. (Image: Julien Ordan/CERN)

Building crab cavities (see the box below) is like assembling an enormous, intricate, three-dimensional puzzle after designing it from scratch. Yet, it is far from child’s play – it requires a lot of thought and careful planning.

The assembly of the new superconducting crab cavities, the testing of which is planned to take place at the Super Proton Synchrotron (SPS) in 2018, is progressing with a steady pace and on schedule. This is the result of a great team effort by seven groups from three departments at CERN**, as well as colleagues from institutes in the UK and the US.

The first milestone was reached in late March 2017, when the two cavities manufactured at CERN demonstrated a maximum transverse voltage of up to 5 megavolts, surpassing the required voltage of 3.4 megavolts.

Since this initial success, each cavity has been inserted into a special titanium vessel, designed to enclose the cavities in liquid helium to allow to operate them at a temperature of 2 Kelvin. The main power coupler and four additional couplers required for the operation of the cavities have been assembled. These operations were carried out in a clean room to preserve the performance level reached during the first radiofrequency tests. Later, the two cavities were connected to each other using a precision table to carefully align the electrical centre of the cavities for optimum beam operation.

The string of cavities is currently being installed in its cryostat. “The cryostat is like a high-performance thermos flask that will reduce the heat load and keep the cavities at their operating temperature. It will also protect them from the Earth’s magnetic field,” explains Ofelia Capatina, deputy leader of the crab cavities work package of the High-Luminosity LHC (HL-LHC) project.

The final step is the installation of the cryostat in the SPS for tests with proton beams. This will be done in January 2018, during the year-end technical stop. “These tests will be critical. They will help us validate more than ten years of research and development on superconducting crab cavity technology and trigger the launch of the series production for the HL-LHC,” explains Rama Calaga, the radiofrequency physicist behind the technology and the work package leader of the crab cavity project.

In total, 16 crab cavities will be installed in the HL-LHC – eight near ATLAS and eight near CMS.

*What is a crab cavity?

They won’t pinch you and you cannot make a salad with them. The name of the cavities has nothing to do with their appearance and is merely illustrative of the effect they have on the proton bunches. The crab cavities will play an important role in the future upgrade of the Large Hadron Collider (LHC), called High-Luminosity LHC (HL-LHC). The new configuration is due to be operational after 2025 with the goal of increasing the luminosity of the LHC (the measure of its collision rate) by a factor of 10. In the present configuration, the two counter-circulating beams meet at an angle at the collision point of the experiments. What makes the crab cavities special is their ability to “tilt” the proton bunches in each beam, forcing them to collide head-on and thus maximising the luminosity. After being tilted, the motion of the proton bunches appears to be sideways – just like a crab.