EYETS report: a cool preparation for the LHC

The re-filling of the arcs with liquid helium started last week, and the LHC is gradually being prepared for electrical tests at the end of the month 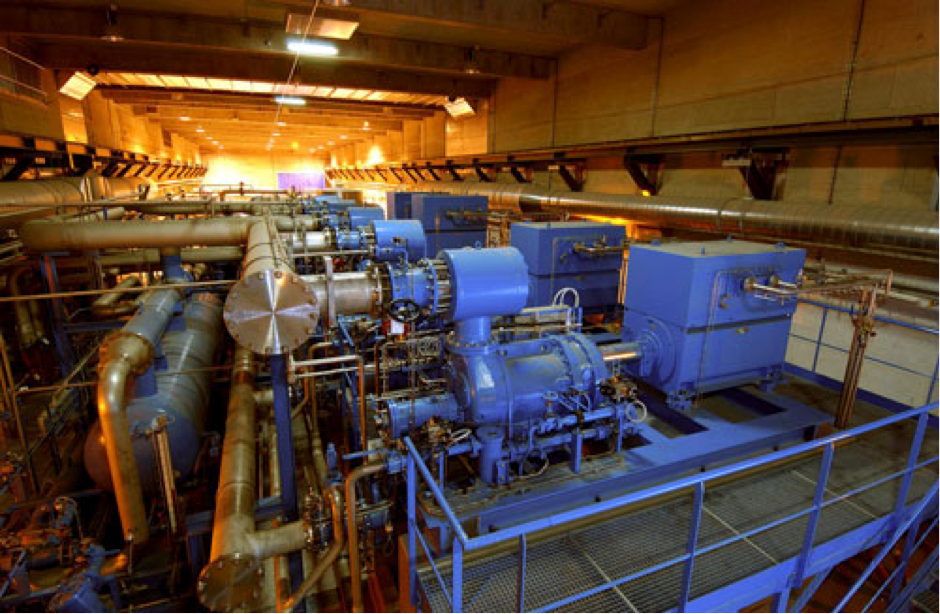 A typical helium compressor station in the LHC, enabling the delivery of 18 kW @ 4.5 K of cooling power (Image: CERN)

The Extended Year-End Technical stop (EYETS) this year is special for many reasons. One full sector of the LHC, sector 1-2 – the arc between point 1 (ATLAS) and point 2 (ALICE) –  was warmed up to room temperature to allow the replacement of one of the 15-metre-long superconducting dipole magnets, which had exhibited abnormal behaviour on a few occasions during the 2016 physics run.

Also, at the beginning of the EYETS, just before the Christmas break, the LHC was emptied of its precious coolant, liquid helium. Most of the helium inventory (130 tonnes) in the LHC was removed from the tunnel and securely stored in CERN’s surface premises, while a small fraction was stored at the helium suppliers’ premises, to allow for a certain degree of operational flexibility. The temperature of the LHC magnets – except for those in sector 1-2 – was maintained at approximately 20 Kelvin (-253 degrees Celsius). The decision to keep the sectors at 20 Kelvin and remove the helium from the LHC tunnel was taken in order to secure the helium inventory from any major operational issue during the Christmas closure period.

Following the successful replacement of the dipole magnet in sector 1-2, the re-connection of all electrical and cryogenic services and the closure of the interconnections, pre-cooling of the sector started on Friday, 17 February. Sixty thermally insulated trucks transporting a total of 1200 tonnes of liquid nitrogen were required to complete this first cool-down phase and to reach a temperature of 80 Kelvin (-193 degrees Celsius) by Saturday, 4 March.

The re-filling of the arcs with liquid helium started about 1 week later and, if all goes according to schedule, the arcs will gradually become available for electrical quality assurance (ELQA) tests between 30 March and 3 April. These ELQA tests are coordinated by the Machine Protection and Electrical Integrity group (TE-MPE) within the Technology (TE) department. Powering tests will then follow, carried out by a collaboration of people from the Electrical Power Converters group (TE-EPC), the Machine Protection and Electrical Integrity group (TE-MPE) and the Operations group (BE-OP). The last phase before commissioning with beam is machine check-out, coordinated by BE-OP in close collaboration with all equipment and service groups.

The next challenge for the cryo team is to measure the maximum thermal power they can charge to the beam screens, in order to cross-check the refrigeration performance of the system. Following the completion of these tests, operational activities will not diminish for the cryogenics team. With a foreseen increase in the number of bunches in the LHC and longer bunch trains coming from the SPS in 2017, more heat will be deposited in the cryogenics circuits: this will require further regulation adjustments and optimisation of the refrigeration power.