During the summer, the third of a series of short, 1.5-metre-long magnet models for the HL-LHC project was successfully tested 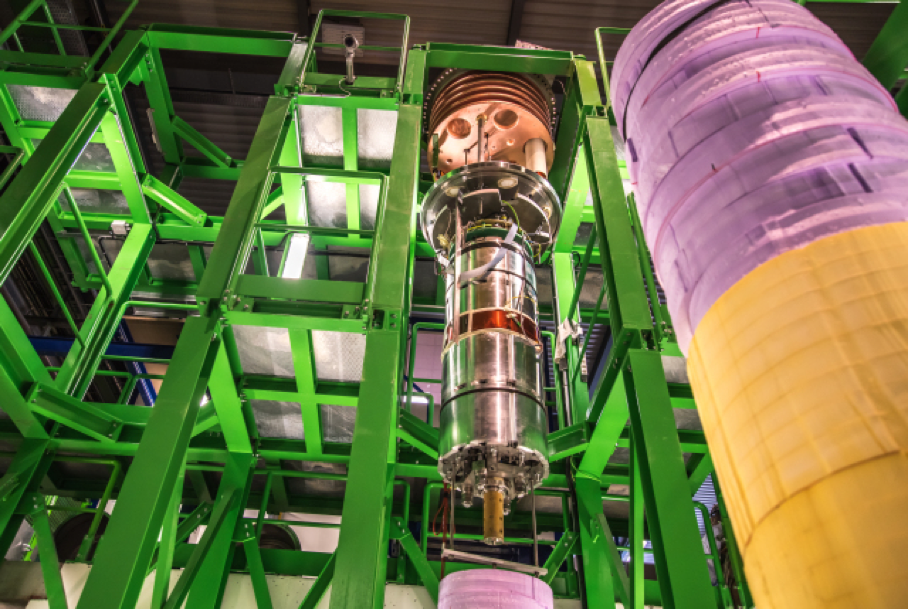 There is no break for the team developing the magnets for the High-Luminosity LHC (HL-LHC) project. During the summer, the third in a series of short, 1.5-metre-long magnet models was successfully tested. This model is made up entirely of coils constructed at CERN and containing an Nb3Sn conductor, which is manufactured using a technology called Powder In Tube (PIT). The PIT process was developed in Europe, and transferred to industry thanks to the strong support from CERN. These magnets are test models for the main quadrupole magnets that will sit in the insertion regions on either side of the ATLAS and CMS detectors to squeeze the beams before collisions.

The short model was tested in the newly-commissioned vertical test station in hall SM18. The magnet rapidly reached its nominal gradient, corresponding to a magnetic field of 11.4 Tesla. It then smoothly went up to the ultimate performance, corresponding to a proton energy in the LHC of 7.5 TeV, and to a magnetic field in the coil of 12.3 Tesla. The short model was then heated up and cooled down again in order to test its “memory” – it demonstrated its ability to pick up from the exact level of magnetic field that it had reached in the last quench of training before the thermal cycle. “This is very important,” says Paolo Ferracin, the engineer in charge of this magnet development and production. “A good memory is an essential feature for magnet operation in the accelerator!”

The next step in the development programme for the main magnets of the HL-LHC project is the testing of the first four-metre-long quadrupole magnet in the US. This will be the first full-length Nb3Sn magnet. “CERN and the US branch of the HL-LHC project proceed hand in hand in the challenging task of building accelerator magnets operating in the range of 12-Tesla peak fields,” says Ezio Todesco, who is in charge of the insertion region magnets for HL-LHC. “The magnet has reached a field value that is 50% higher than that reached with the current LHC magnets, and it is an essential step in paving the way for the future of CERN.”