Once upon a time, there was a superconducting niobium-tin... 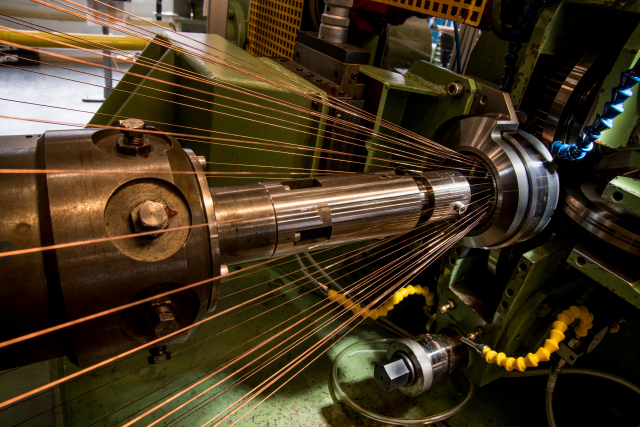 A Rutherford cabling machine is used to assembly the high-performance cables, made from state-of-the-art Nb3Sn conductor, for the LHC High Luminosity upgrade. (Photo: Max Brice/CERN)

Extraordinary research needs extraordinary machines: the upgrade project of the LHC, the High-Luminosity LHC (HL-LHC), has the goal of achieving instantaneous luminosities a factor of five larger than the LHC nominal value, and it relies on magnetic fields reaching the level of 12 Tesla. The superconducting niobium-titanium (NbTi) used in the LHC magnets can only bear magnetic fields of up to 9-10 Tesla. Therefore, an alternative solution for the superconducting magnets materials was needed. The key innovative technology to develop superconducting magnets beyond 10 Tesla has been found in the niobium-tin (Nb3Sn)  compound.

This compound was actually discovered in 1954, eight years before NbTi, but when the LHC was built, the greater availability and ductility of the NbTi alloy and its excellent electrical and mechanical properties led scientists to choose it over Nb3Sn.

The renewed interest in Nb3Sn relies on the fact that it can produce stronger magnetic fields. In the HL-LHC, it will be used in the form of cables to produce strong 11 T main dipole magnets and the inner triplet quadrupole magnets that will be located at the ATLAS (Point 1) and CMS (Point 5) interaction points.

The Nb3Sn wires that will be used in the coils of the HL-LHC magnets are made up of a copper matrix, within which there are several filaments of about 0.05 mm in diameter. These filaments are not initially superconducting, as they would be too brittle to withstand the cabling process and would lose their superconducting properties. Therefore, the unreacted, not-yet-superconducting Nb3Sn wires must first be assembled into cables and the cables then wound into a coil. Finally the coil must be heat-treated at about 650 oC for several days to make it superconducting via a complex reaction and diffusion process.

The cabling of the strands is done in the superconducting laboratory in Building 163 using a machine, which cables together 40 unreacted strands of Nb3Sn into what is known as a Rutherford cable. The Rutherford cable is so far the only type of superconducting cable used in accelerator magnets. It consists of several wires that are highly compacted in a trapezoidal cross section to obtain high current density.

“The Nb3Sn cables for the 11 T dipole magnet series and for the insertion quadrupole magnets have been developed by our section here at CERN,” says Amalia Ballarino, head of the Superconductor and Superconducting Devices (SCD) section of the Magnets, Superconductors and Cryostats (MSC) group in the Technology department. “In the superconducting laboratory, in Building 163, we are now producing the series of cables for the new magnets that will be part of the HL-LHC.”

There are several challenges connected to the cabling of the wires. First of all, the mechanical deformation due to the cabling must have a negligible influence on the shape, and therefore on the electrical performance, of the internal filaments. The deformed wire must be able to cope with the heat treatment without its performance deteriorating. To assure field quality, all the wires must be cabled, with the same tension, into a precise geometry across the whole cable length.

“With the HL-LHC, for the first time there will be Nb3Sn magnets in an accelerator, it’s a big responsibility”, adds Ballarino. “For HL-LHC, we are not in an R&D phase anymore, and this means that we have reached the highest possible level of performance associated with the present state-of-the-art generation of Nb3Sn wires,” points out Ballarino. “Future higher-energy accelerators will require fundamental research on Nb3Sn wire to produce even stronger magnetic fields,” she concludes.