A team composed of CERN staff, industrial support and mechanics from Pakistan have given access to the last LHC splice for inspection 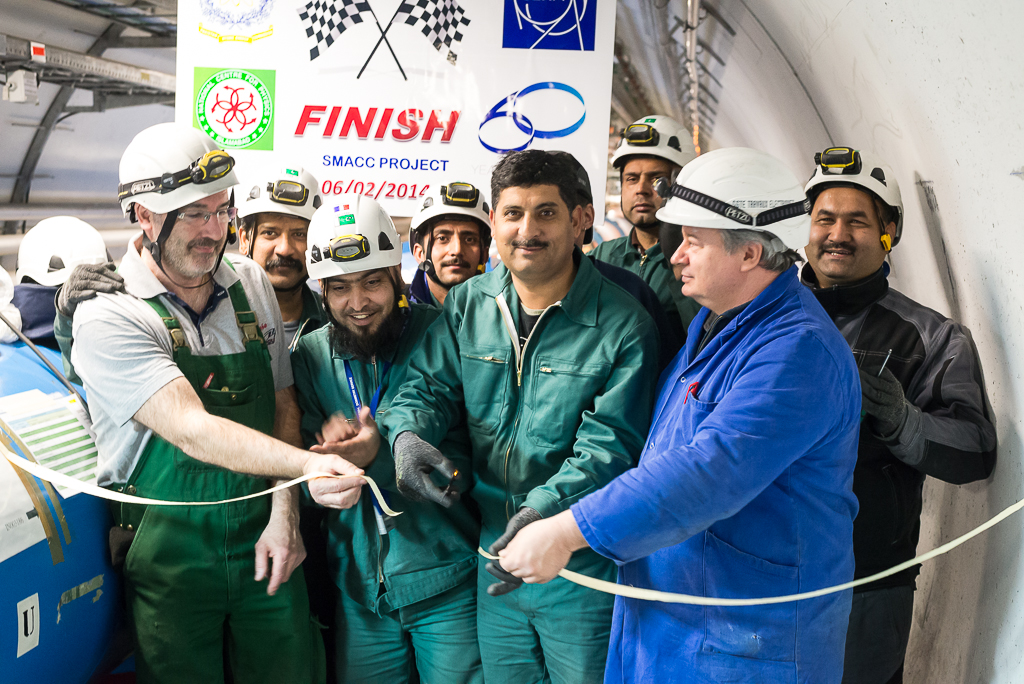 Members of the Superconducting Magnets And Circuits Consolidation team (SMACC) celebrate in style after opening up the last LHC splice (Image: Michael Struik/CERN)

Since April last year, the Superconducting Magnets And Circuits Consolidation (SMACC) team has been strengthening the electrical connections of the superconducting circuits on the Large Hadron Collider (LHC). This work is taking place as part of the first LHC long shutdown.

To consolidate an interconnection between LHC magnets, the SMACC team has first to open the zone of the accelerator around the joints. The first step is to slide a custom-built metallic bellows of the way and remove the thermal shielding inside, revealing a series of metallic pipes linking the magnets to each other. One set of these pipes – the "M-lines" – must then be cut open to access the splices between the superconducting cables.

"Opening the M-lines allows us to check the quality of the existing connections, to determine if they need to be redone before they are consolidated," says CERN engineer Jean-Philippe Tock, who leads the SMACC project.

Tock says that the rest of the consolidation project is progressing well. "Over 1000 of the 1695 interconnections between magnets on the LHC have been re-welded," he says. "And more than a quarter of the accelerator has been permanently reclosed and leak tested."

Tock says that all the activities are moving in harmony thanks to a dedicated coordination team and efficient supervision of the production team. "Consecutive activities take place one behind the other in a train-like structure moving along the accelerator," he says.