Super and ferric: the first HL-LHC component is ready 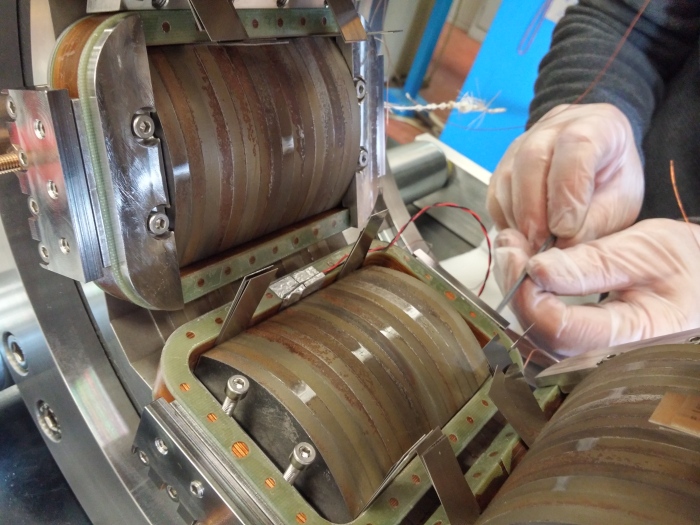 An expert in the LASA Laboratory (INFN Milan, Italy) works on assembling the first sextupole corrector of the HL-LHC.

Although the name might sound completely unfamiliar, superferric magnets were first proposed in the 1980s as a possible solution for high-energy colliders. However, many technical problems needed to be overcome before the use of superferric magnets could become a reality. In its final configuration, the HL-LHC will have 36 superferric corrector magnets, of which 4 will be quadrupoles, 8 sextupoles and 24 higher order magnets.

In superferric (or “iron-dominated”) magnets, iron is used in the poles that shape the field, in addition to in the yoke as in a standard superconducting magnet, while the coils are made of superconducting material that is kept at cryogenic temperatures to reduce power losses to a minimum. Superferric magnets have been shown to be highly reliable and this is no trivial requirement for machines like the HL-LHC in which, during normal operations, high-intensity beams will have to complete hundreds of millions of turns in stable conditions before being safely dumped by the operators.

A superferric corrector magnet was developed by CIEMAT for the SLHC-PP study, and that design was used as a starting point for the HL-LHC correctors. Subsequently, in the framework of a CERN-INFN Collaboration Agreement for the HL-LHC project signed in 2013, the LASA laboratory of the Milan section of the Italian National Institute for Nuclear Physics (INFN) has taken over as a partner in the project. “At LASA, we dealt with the design, assembly and testing of the magnet,” explains Giovanni Volpini from INFN Milano. “This was possible thanks to the expertise the laboratory has acquired working on many of the most important superconducting magnets for high-energy physics. However, this is the first time in many years that a full-size superconducting magnet has been developed entirely in-house. We are very happy with the results of the recent tests: the magnet has shown high stability, as it could reach and surpass the ultimate field value required by the design specifications before quenching. The ultimate field we measured was almost 10% above the nominal operating field. Magnet stability will be a key feature to guarantee the overall reliability of the whole beam corrector system once all the hardware components have been installed in the tunnel.” “The partnership between INFN and CERN has been key in achieving this result and it will be as fundamental as the other collaborations in the HL-LHC project in meeting the project’s goals,” confirms Paolo Fessia from the Technology Department, who is in charge of the project on the CERN side.

Now that the first piece of hardware has proven that superferric technology works as expected, HL-LHC and INFN experts will go on to finalise the design of the other corrector magnets. In parallel, other groups in various institutes around the world are developing, building and testing other HL-LHC components, including the highly challenging high-field magnets. The new ring is starting to take shape.