Linac 4 has begun testing its RFQ module. This is the first stage of testing for the Linac 2 successor 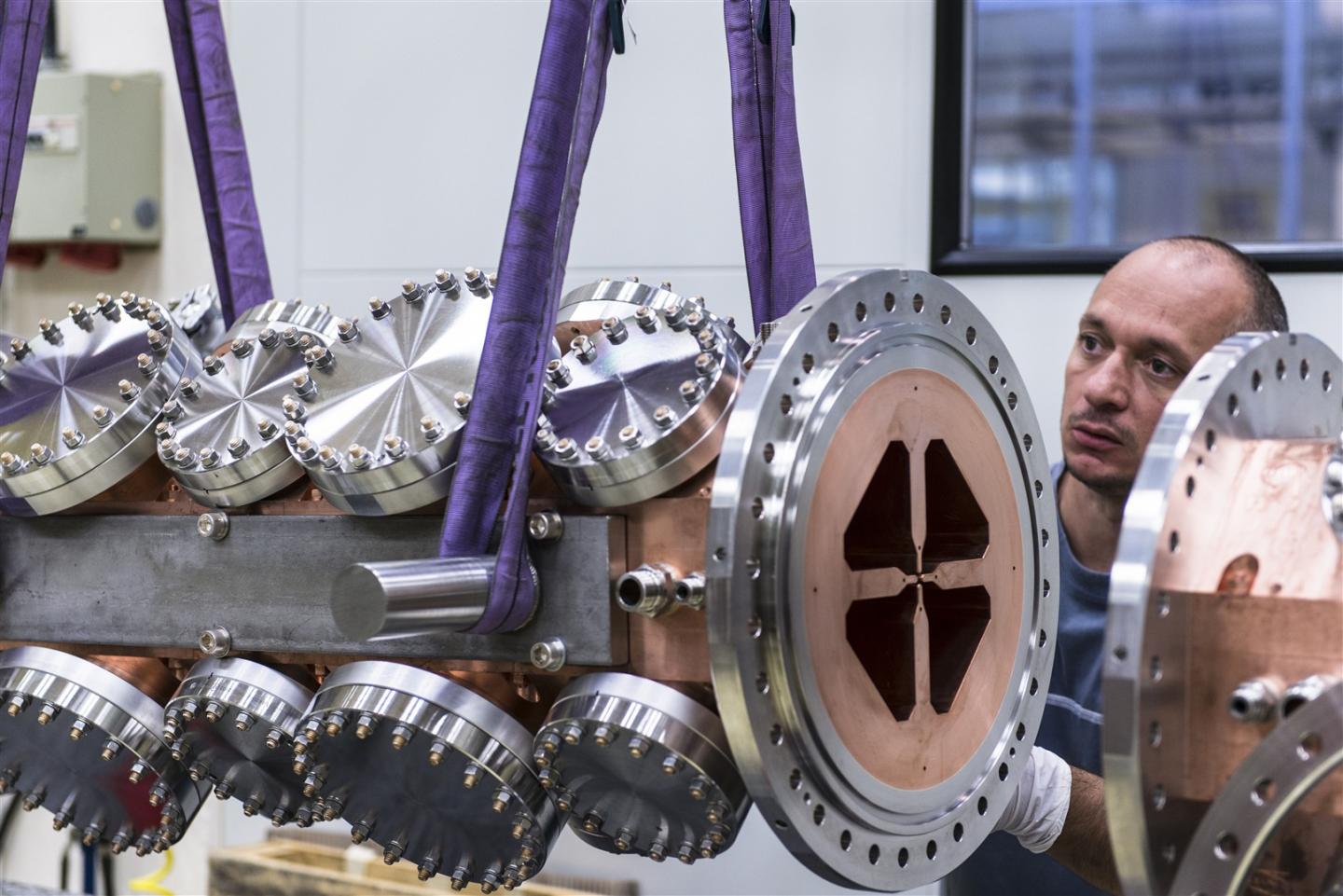 On 3 August 2012, the Linac 4 radiofrequency quadrupole (RFQ) module was installed at the accelerator test-stand in Building 152. The site will be the module’s home for almost a year, as the linear accelerator enters the assembly and testing stage.

Over the next Long Shutdown (LS2), Linac 4 will replace the Linac 2 linear accelerator as the first link in CERN’s accelerator chain. It will deliver particles at 160MeV to the Proton-Synchrotron Booster, more than triple the energy currently delivered by Linac 2. But before the accelerator team can pop the champagne, the various elements of Linac 4 will be tested and re-tested in facilities across CERN.

“The first Linac 4 tests are currently underway, starting with the CERN-built RFQ,” says Carlo Rossi, BE-RF Group physicist and RFQ project coordinator. “It’s an extremely impressive module. Measuring just 3 metres in length, it can take the beam from 45keV up to 3MeV – just the right energy for injection into a typical accelerator.” The RFQ will be able to accelerate both protons and hydrogen ions directly from the source. It will also compact the beam into the “bunches” needed for further acceleration and will provide longitudinal and transverse focusing, defining the beam characteristics and quality for the entire accelerator chain.

Currently, the Linac 4 team are preparing the module for radio-frequency tuning – calibrating the module’s electromagnetic fields to reproduce the precise pattern defined by the beam dynamics team. While this is underway, the ion source that will provide particles to the accelerator is being installed and connected to the module. In October, once both steps have been completed, the team will begin testing the RFQ and the subsequent transport line with beam.

This testing brings to a close over three years of work on the RFQ module, whose entire machining was done at CERN. “RFQs are quite special: they are very delicate, sensitive modules,” says Serge Mathot, EN Department physicist. “They are always a challenge to construct. The primary difficulty is with the mechanical tolerances, i.e. ensuring the size of the module with a precision of a few tens of microns.” Read more about the challenging construction of the Linac 4 RFQ here.

Local testing with beam is scheduled for completion in mid-2013, after which the RFQ and line will be permanently installed in the new Linac 4 tunnel. There they will be connected to the rest of the Linac 4 accelerator modules, which are still under construction across Europe.