Vacuum chambers full of ideas for the Swedish synchrotron

CERN’s Vacuum, Surfaces and Coatings group has contributed to the development of vacuum chambers for MAX IV, the new synchrotron in Sweden 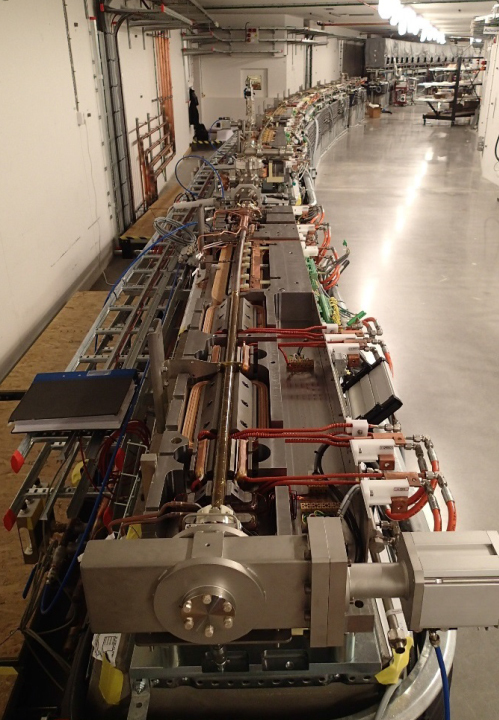 A section of the new 3 GeV MAXIV synchrotron at the time of installation. In the centre of the magnets you can see the vacuum chamber developed in collaboration with CERN. (Photo: Marek Grabski/MAX IV vacuum group)

On 21 June, the King and the Prime Minister of Sweden officially opened MAX IV, a brand-new synchrotron in Lund, Sweden. The summer solstice, the longest day of the year, was deliberately chosen for the ceremony: MAX IV, a cutting-edge synchrotron, will deliver the brightest X-rays ever produced to more than 2000 users.

Some 1500 kilometres away, a team at CERN followed the opening ceremony with a touch of pride. The Vacuum, Surfaces and Coatings group in the Technology department (TE-VSC) participated in the construction of this new synchrotron. Its contribution lies at the very heart of the accelerator, in its vacuum chambers. The group developed the coating for most of the vacuum chambers in the larger of the two rings, which has a circumference of 528 metres and operates at an energy of 3 GeV.

The CERN group was brought in to develop the coating for the vacuum chambers using NEG (Non-Evaporable Getter) material. A thin, micrometric layer of NEG ensures a high-grade vacuum: it traps residual gas molecules and limits the release of molecules generated by the bombardment of photons. The technology was developed at CERN in the late 1990s for the LHC: six kilometres of vacuum chambers in the LHC, i.e. those at ambient temperature, are coated with NEG material. CERN’s expertise in the field is therefore unique and recognised worldwide.

“The MAX IV design was very demanding, as the cross-section of the vacuum chambers is very small, just 2.4 centimetres compared to 8 cm at the LHC,” explains Paolo Chiggiato, TE-VSC group leader. “In addition, some parts were geometrically complex.” Synchrotron light is extracted to experimental areas every 26 metres. At the extraction point, the chamber comprises two tubes that gradually diverge.

The CERN group began its involvement in the project in 2014 and developed the chemical surface treatment method used for almost all the vacuum chambers in the large ring of MAX IV. Treatment of the cylindrically symmetrical vacuum chambers was carried out by a European firm and a European institute, to which CERN had already transferred the technology in the past. The most complex chambers, around 120 in total, were treated at CERN. Two benches for sputtering, the coating technique used, were developed at CERN. “These benches are equipped with a wire whose material is deposited onto the surface of the chamber. For the MAX IV chambers, the wire had a diameter of 0.5 millimetres and its alignment was critical,” explains Mauro Taborelli, leader of the Surfaces, Chemistry and Coatings section in the TE-VSC group. “The procedure was all the more complicated because the extraction chambers, in which the photons are extracted, have a tiny vertical aperture, of around 1 millimetre,” confirms Pedro Costa Pinto, leader of the team responsible for the vacuum deposition process.

The vacuum chambers were delivered in 2014 and 2015. “It’s essential for us to participate in these types of project, which require lots of ingenuity, to be able to maintain and build on our know-how,” says Paolo Chiggiato. “By developing our expertise in this way, we will be ready for new projects at CERN.”