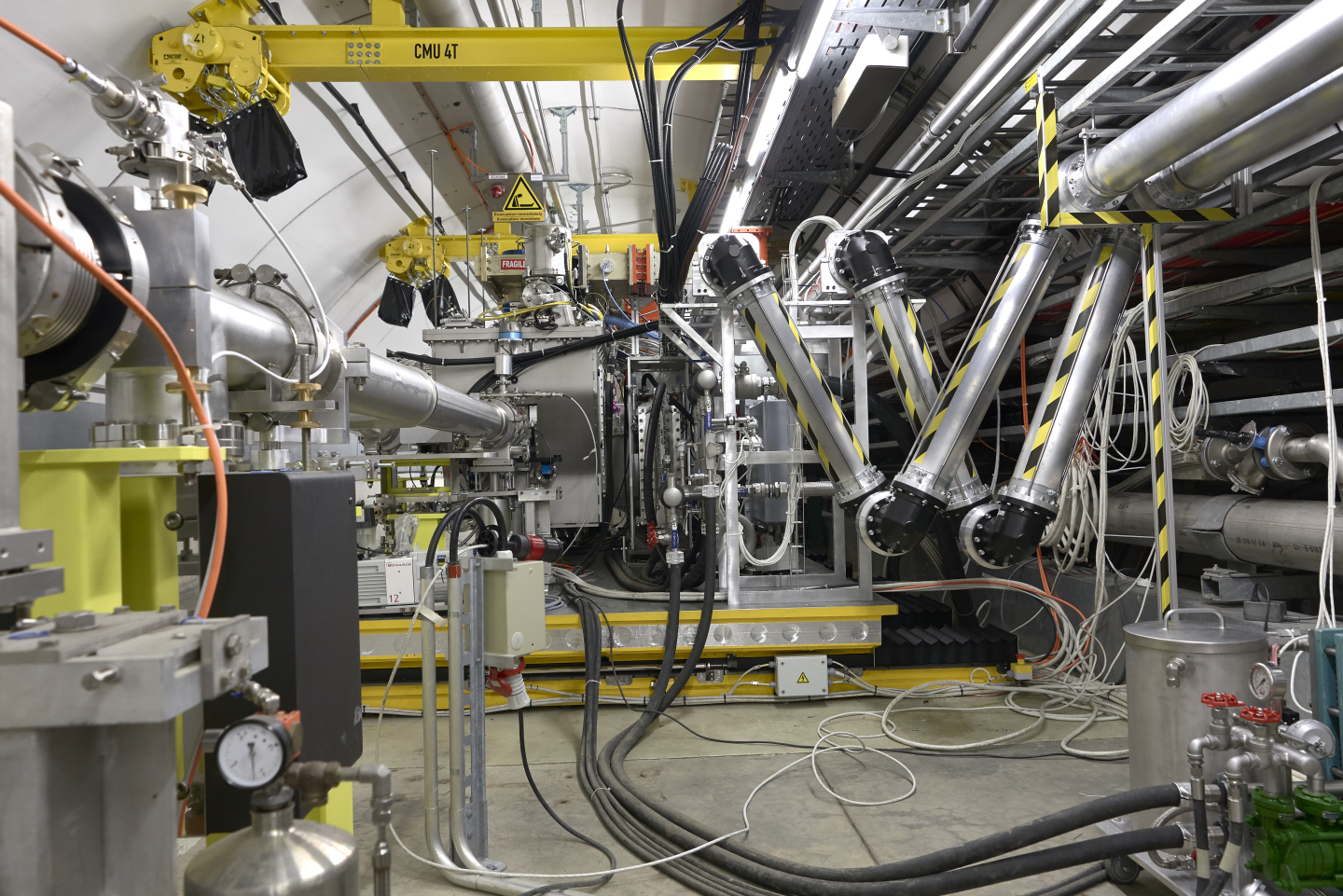 Test bench of the first two prototype crab cavities in the Super Proton Synchrotron (SPS) accelerator. The cryomodule containing the cavities is installed on a mobile table that allows it to be moved into the beam line as needed (Image: M. Brice/CERN)

The crab cavities, used to rotate the beams of protons, have been successfully tested on 23 May – a world first. The test took place using a beam from the SPS and showed that bunches of protons could be tilted using these superconducting transverse radiofrequency cavities. These cavities will play an important role to increase the luminosity in the HL-LHC, which will be commissioned after 2025 and will increase the luminosity of the LHC by a factor of five to ten.

In the LHC, the bunches of particles meet at a small angle at each collision point of the experiments. When installed at each side of the ATLAS and CMS experiments, the crab cavities will “tilt” the bunches of protons in each beam to maximise their overlap at the collision point. Тhis way every proton in the bunch will be forced to pass through the whole length of the opposite bunch, increasing the probability of collisions and hence the luminosity. After the proton bunches have been tilted, their motion appears to be sideways – just like a crab. Crab cavities were already used in the KEKB collider in Japan for electrons and positrons, but never with protons, which are more massive and at significantly higher energies. “The crab cavities are expected to increase the overall luminosity by 15 to 20%,” explains Rama Calaga, leader of the crab cavity project.

The two first crab cavity prototypes were manufactured at CERN in 2017 in collaboration with Lancaster University and the Science and Technology Facilities Council (STFC) in the United Kingdom, as well as the U.S. LHC Accelerator Research Program (USLARP). The cavities were assembled in a cryostat and tested at CERN. They are made of high-purity niobium superconducting material, operating at 2 kelvins (-271°C), in order to generate very high transverse voltage of 3.4 million volts. The cavities were installed in the SPS accelerator during the last winter technical stop to undergo validation tests with proton beams.

The first beam tests on 23 May lasted for more than 5 hours at a temperature of 4.2 K with a single proton bunch accelerated to 26 GeV and containing between 20 and 80 billion protons, almost the intensity of the LHC bunches. The crab cavities were powered to about 10% of their nominal voltage. The “crabbing” was observed using a special monitor to control the tilt along the length of the bunch. “These tests mark the start-up of a unique facility for testing superconducting cavities on a high-current, high-energy proton beam,” explains Lucio Rossi, leader of the HL-LHC project. “The results are impressive and crucial to prove the feasibility of using such cavities for increasing the luminosity in the LHC.”