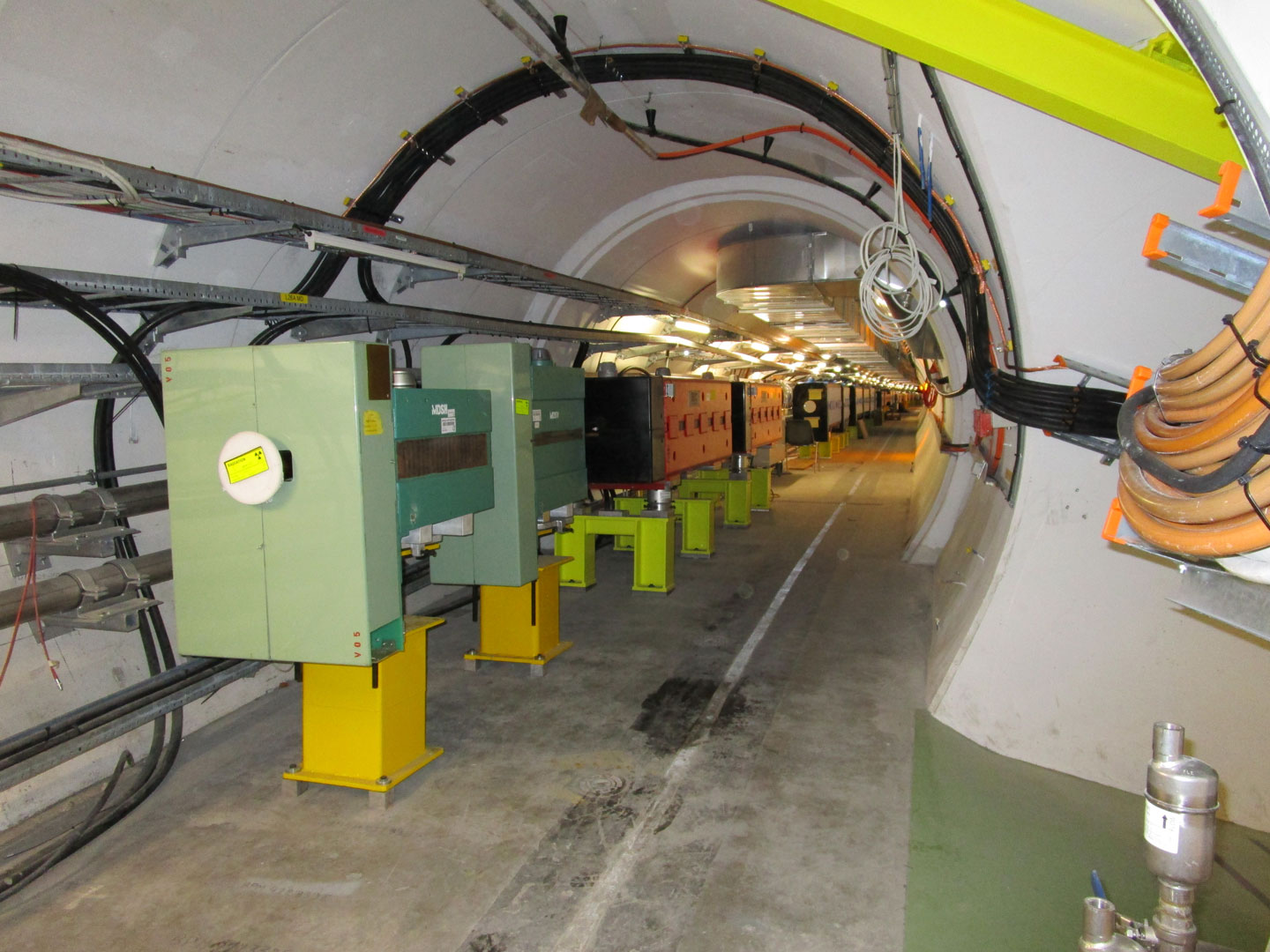 The AWAKE proton line with all the magnets installed (Image: AWAKE collaboration)

AWAKE is the proof-of-principle experiment whose aim is to use protons to generate powerful wakefields to accelerate an electron beam. With accelerator gradients hundreds of times higher than those used in current systems, this technique could revolutionise the field of particle acceleration. Installed in the tunnel previously used by the CNGS facility, AWAKE is completing the service installation phase and will receive the plasma cell in the coming months.

AWAKE is the world’s first proton-driven plasma wakefield acceleration experiment. In AWAKE, a beam of protons from the SPS will be travelling through a plasma cell and this will generate a wakefield that, in turn, will accelerate an electron beam. A laser will ionise the gas in the plasma cell and seed the self-modulation instability that will trigger the wakefield in the plasma.

The project aims to prove that the plasma wakefield can be driven with protons and that acceleration will be extremely powerful, hundreds of times more powerful than that achieved today.

Over about 18 months of hard work, the teams have cleared the old CNGS area – leaving only the infrastructure that will be reused by AWAKE – and have modified the services to meet AWAKE’s needs. “We dismantled 100 metres of the proton beam line, completed the civil-engineering needed to house the new electron and laser beam lines, removed several kilometres of old cables, and installed some 100 kilometres of new cables,” says Edda Gschwendtner, CERN AWAKE project leader. “We have installed the 16 magnets for the proton line for AWAKE, built the laser clean room, modified the access and cooling and ventilation… It has been a huge amount of work in a very short time.”

Integrating a new experiment into an existing facility is extremely challenging, but now that the area has been cleared and is ready for the future installations, Ans Pardons, AWAKE’s Coordination Package Leader for Integration and Installation, speaks with a smile: “It has been a challenging time for the CERN teams and the collaborating institutes involved in the project, but we can’t relax yet! We are now looking forward to installing the various beam and diagnostics components and starting to test them.”

One of AWAKE’s core components is the 10-metre-long plasma cell that will be arriving in the tunnel in a couple of months. A first prototype has successfully completed commissioning tests in CERN's North Area where the uniformity of the plasma temperature in the cell has been validated. The installation of the plasma cell in the AWAKE tunnel will be followed by the installation of the laser, the vacuum equipment and the diagnostic system for both laser and proton beams. In March 2016, the proton line, the laser and the experimental equipment will be ready for hardware commissioning, and beam commissioning will start in the summer. “Next year will continue to be very intense for the whole collaboration,” confirms Edda. “Indeed, in parallel to starting physics using the proton beam line, we will continue the installation of the electron line with the aim of starting the acceleration tests in 2017.”

If everything goes as planned, the AWAKE collaboration hopes to measure the first wakefields in the plasma cell in about one year from now