With plasma cell in place, CERN’s AWAKE experiment is one step closer to testing acceleration hundreds of times more powerful than current methods 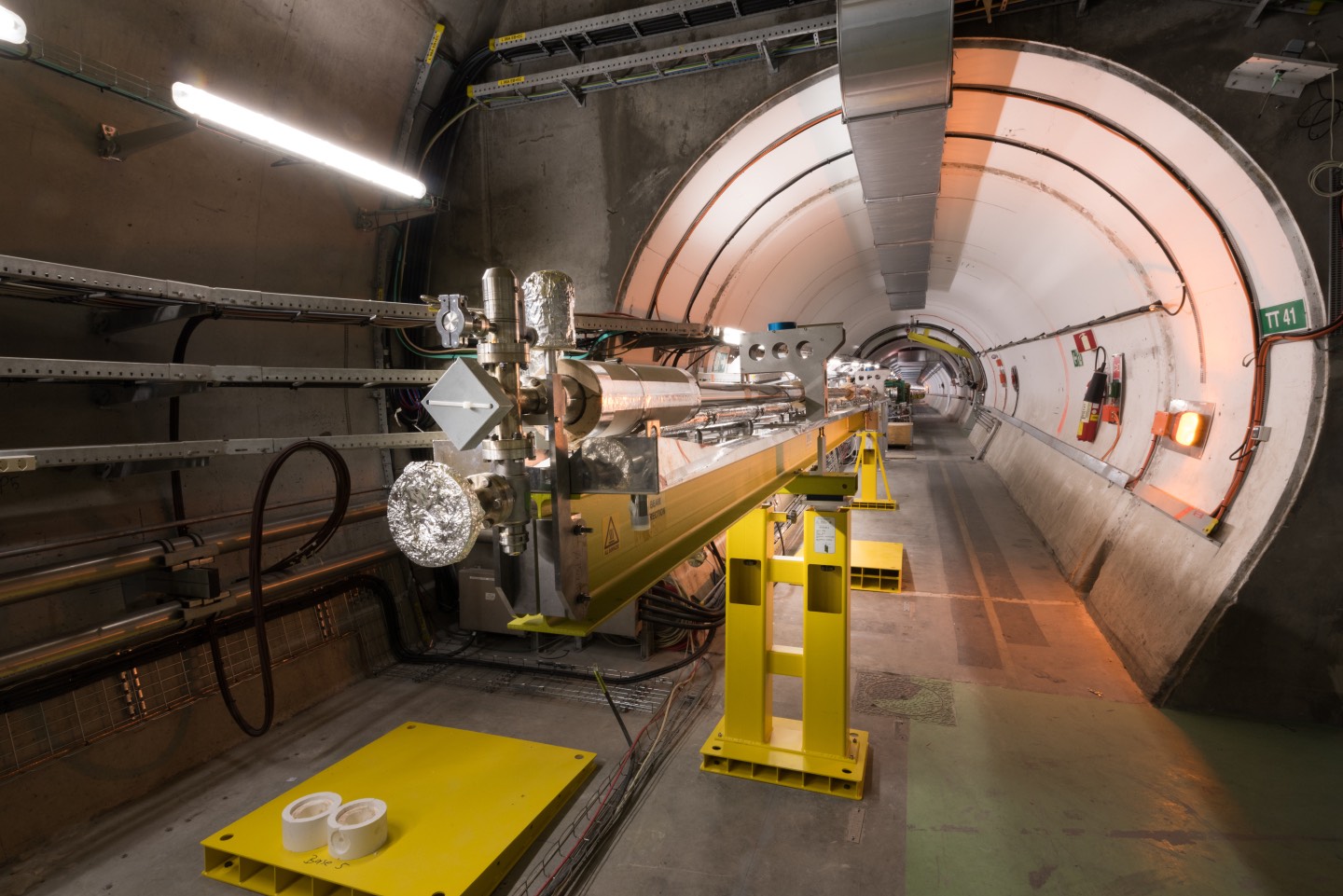 AWAKE's 10-metre-long plasma cell developed by MPP has been moved into place in the experiment tunnel. (Image: Maximilien Brice/CERN)

What if there was a technology that could accelerate particles with hundreds of times more power than current methods? The AWAKE experiment, under construction at CERN, is preparing to test this question with proton-driven plasma wakefield acceleration. On Thursday, 11 February, a key component was lowered into the tunnel and put into place: the 10-metre-long plasma cell, which was developed by the Max Planck Institute for Physics, in Munich.

Plasma wakefield acceleration could offer an alternative technology. A proton beam, known as the “drive beam”, is injected into an ionized gas – or plasma – and attracts free electrons while passing through it, creating waves of electric charges in the wake of the proton beam. A second beam of electrons, the “witness” beam, injected in the right phase behind the proton beam, feels the wakefield and gets accelerated, just as a surfer rides a wave.

Plasma wakefield acceleration has been already demonstrated in laboratories around the world using an electron beam as drive beam. What makes AWAKE different, and a proof-of-principle experiment, is that it aims to test plasma wakefield generation using, for the first time, protons. This can only be done at CERN as it requires high-energy proton beams. That is why AWAKE will be installed in the facility formerly used by the CNGS experiment, using the proton beam coming out from the Super Proton Synchrotron (SPS).  The reason to try protons is that because they have higher energy than an electron beam used for plasma wakefield acceleration, they can penetrate more into the plasma, causing a longer “wave” and therefore a more powerful acceleration. Physicists think they could produce accelerations hundreds of times higher than those achieved with RF cavities.

AWAKE will complete its first phase of installation this year, with the installation of the laser, the vacuum equipment and the diagnostic system for both laser and proton beams. It plans to start the first phase of the experimentation at the end of the year, where the physics of the proton-driven plasma wakefield will be tested. Next year, the electron source and the electron beam line will be installed to then test the injection of electron beam and its effective acceleration through the plasma.

“There are still many challenges to overcome”, says Edda Gschwendtner, CERN AWAKE project leader. “But if this technology really materialises, the future is very bright. We could have much shorter linear colliders, we might have table-top accelerators, also for medical applications.”

For more information, watch this TEDxCERN talk given by Edda Gschwendtner.