The Baby MIND neutrino detector, after being assembled and tested at CERN, is now ready to be shipped to Japan 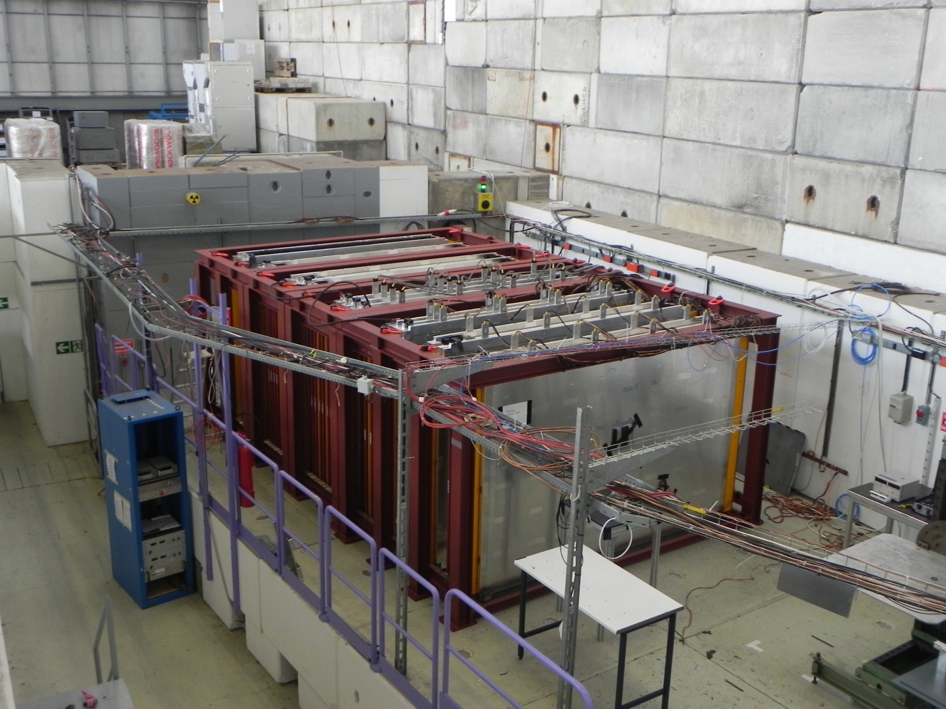 Baby MIND under test on the T9 beamline at the Proton Synchrotron experimental hall in the East Area, summer 2017 (Image: Alain Blondel/University of Geneva)

A member of the CERN Neutrino Platform family of neutrino detectors, Baby MIND, is now ready to be shipped from CERN to Japan in 4 containers to start the experimental endeavour it has been designed and built for. The containers are being loaded on 17 and 18 October and scheduled to arrive by mid-December.

Baby MIND is a 75-tonne neutrino detector prototype for a Magnetised Iron Neutrino Detector (MIND).  Its goal is to precisely identify and track positively or negatively charged muons – the product of muon neutrinos from the T2K (Tokai to Kamioka) beam line, interacting with matter in the WAGASCI neutrino detector, in Japan. The more detailed the identification of the muon that crosses the Baby MIND detector, the more we can learn about the original neutrino, in view of contributing to a more precise understanding of the neutrino oscillations phenomenon*.

The journey of these muon neutrinos starts from the Japan Proton Accelerator Research Complex (J-PARC) in Tokai. They travel all the way to the Super-Kamiokande detector in Kamioka, some 295 km away. On their journey, the neutrinos pass through the near detector complex building, located 280 m downstream from Tokai, where the WAGASCI + Baby MIND suite of detectors are. Baby MIND aims to measure the velocity and charge of muons produced by the neutrino interactions with matter in the WAGASCI detector. Muons precise tracking will help testing our ability to reconstruct important characteristics of their parent neutrinos. This, in turn, is important because in studying muon neutrino oscillations on their journey from Tokai to Kamioka, it is crucial to know how strongly and how often they interact with matter.

Born from prototyping activities launched within the AIDA project, since its approval in December 2015 by the CERN Research Board, the Baby MIND collaboration – comprising CERN, University of Geneva, the Institute of Nuclear research in Moscow, the Universities of Glasgow, Kyoto, Sofia, Tokyo, Uppsala and Valencia – has been busy designing, prototyping, constructing and testing this detector. The magnet construction phase, which lasted 6 months, was completed in mid-February 2017, two weeks ahead of schedule.

The fully assembled Baby MIND detector was tested on a beam line at the experimental zone of the Proton Synchrotron in the East Hall during Summer 2017. These tests showed that the detector is working as expected and, therefore, ready to go.

Neutrinos are everywhere. Each second, several billion of these particles coming from the Sun, the Earth and our galaxy, pass through our bodies. And yet, they fly past unnoticed. Indeed, despite their cosmic abundance and ubiquity, neutrinos are extremely difficult to study because they hardly interact with matter. For this reason, they are among the least understood particles in the Standard Model (SM) of particle physics.

What we know is that they come in three types or ‘flavours’ – electron neutrino, muon neutrino and tau neutrino. Since their first detection in 1956, and until the late 1990s neutrinos were thought to be massless, in line with the SM predictions. However, a few years later, the Super-Kamiokande experiment in Japan and then the Sudbury Neutrino Observatory in Canada independently demonstrated that neutrinos can change (oscillate) from one flavour to another spontaneously. This is only possible if neutrinos have masses, however small, and the probability of changing flavour is proportional to their difference in mass and the distance they travel. This ground-breaking discovery was awarded with the 2015 Physics Nobel Prize.