On 18 December 2016 the Sun aligned with the black hole in the centre of the Milky Way, allowing CAST to search for any exotic particles it might emit 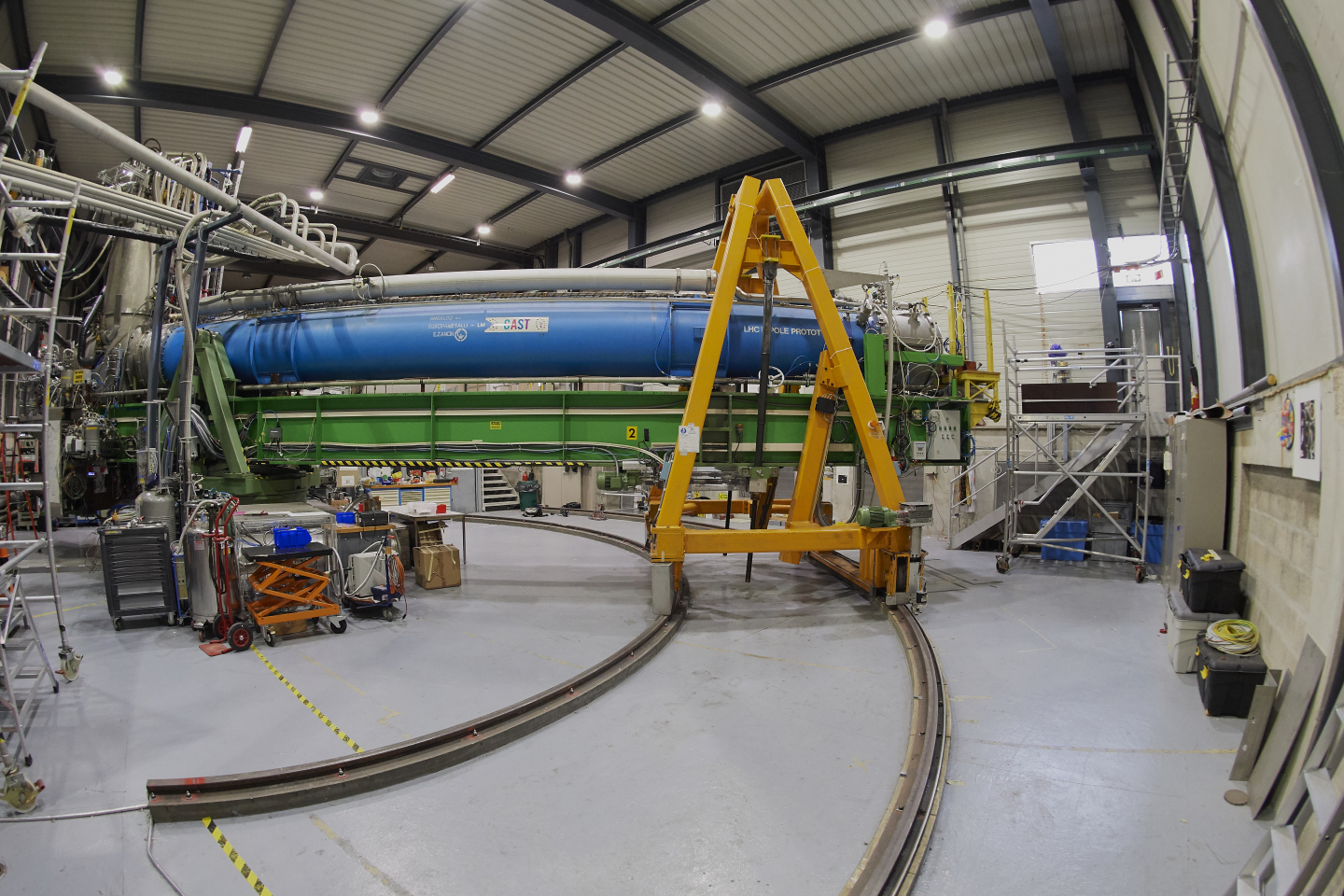 The CAST telescope is made of a prototype dipole magnet from the Large Hadron Collider. It moves along the tracks on the ground to follow the Sun's movement across the sky (Image: Maximilien Brice/ CERN)

Yesterday, 18 December 2016, the Sun aligned with the centre of our galaxy, allowing a pioneering experiment to take place at CERN.

The CERN Axion Solar Telescope (CAST) uses a prototype dipole magnet originally built for the LHC, to measure hypothetical exotic particles, called axions and chameleons, allegedly being emitted from the inner Sun. But on Sunday the Sun made its annual alignment with the black hole at the centre of our galaxy, the Milky Way. The CAST researchers haven’t attempted to measure the new particles that could have been emitted by this black hole or its environment, until now.

“We’ve always looked for exotic particles from the Sun, we have been doing this for years, but for one specific day of the year we can look beyond the Sun, to see if something more happens coming from the galatic centre,” says Konstantin Zioutas, spokesperson for the experiment.

Axion and chameleon particles are studied because they could provide the solution to help explain both dark matter and dark energy – two major problems in physics currently. With the alignment, the researchers will be able to use the Sun as part of their equipment, utilising its gravitational force as a lens to focus slow speed exotic particles such as axions – a phenomenon called gravitational lensing.

“The galactic centre might send out exotics that we can detect now, which might tell us far more about the dark universe than we could know before. The Sun, as a lens, can enhance the flux of a faint exotic stream by about one billion, provided it is aligned with the Sun-Earth system,” Zioutas explains.

This is not the first time an experiment aims to measure exotic particles from a black hole, but it is the first time anyone has ever looked for these particles interacting with the magnetic field of the CAST magnet and being revealed by the INGRID X-ray detector downstream.
They are also hoping for the first time to detect the particles as they interact directly with matter. This type of interaction is key in the case of particles that might compose dark energy, such as chameleons.

“Until now, it’s been impossible to detect  particles through their specific  direct interaction with matter because the equipment didn’t exist. We had to build a special detector, called KWISP (Kinetic Weakly Interacting Slim Particle detector),” Giovanni Cantatore, deputy spokesperson for CAST, says.

To measure these interactions the researchers had to find a way to detect the extremely tiny forces, much less than the weight of a bacterium, which are produced when chameleons bounce off matter.

“KWISP uses a special membrane force sensor  - like the skin of a drum. When it’s hit by the chameleons, it vibrates at a frequency we can fix using the ‘chameleon chopper’, a device we invented for this purpose,” explains Cantatore.

The CAST experiment is now running analysis of the data it took yesterday, although early evidence suggests they were not able to see any additional new particles from the black hole. The team will now start preparing for next year’s alignment, when the cosmic alignment also includes the Moon.