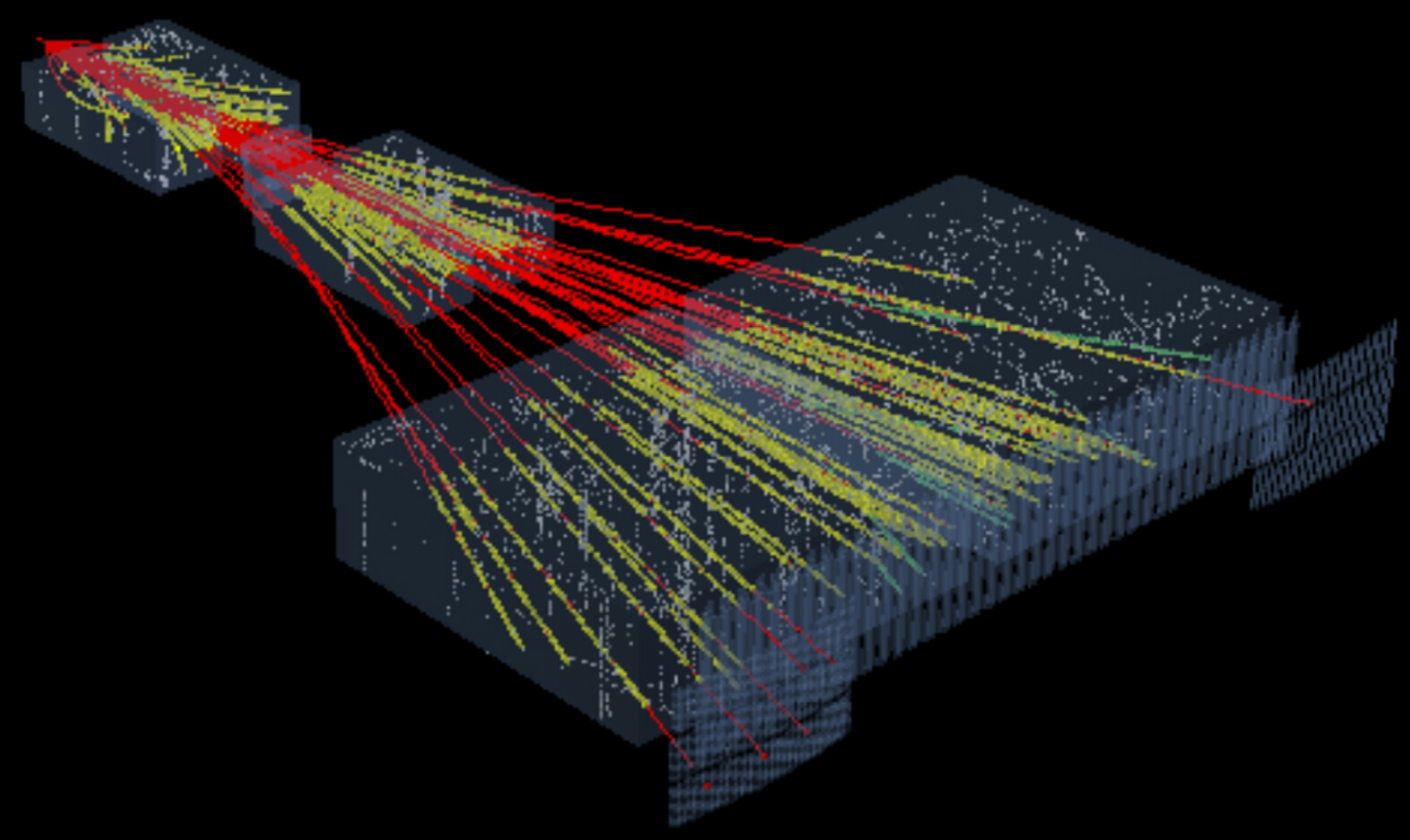 Argon ions collide with scandium in the NA61/SHINE experiment at CERN (Image: NA61)

CERN’s accelerators supply a raft of experiments with all sorts of different particles. Now the accelerator complex is performing a new trick: supplying argon ions to an experimental programme for the first time. The argon ions are produced at a special source and made to circulate around four accelerators before being sent to a target.

Preparations for this beam of argon ions have been in progress at the CERN accelerator chain for two years. Controlling these particles, which have a much greater mass than protons and are sent at six different energies, is no mean feat. The machine operators had to adapt the acceleration system of the Super Proton Synchrotron (SPS), a 7-kilometre-circumference accelerator that represents the last loop on the ions’ journey before they are ejected.

The SPS is the last accelerator in the chain before the 27-kilometre-circumference Large Hadron Collider (LHC). To allow eight weeks of physics with argon ions while also sending protons to the LHC experiments, the accelerators will alternate between these two types of particles. In each "super-cycle" of 34.8 seconds, the SPS will deliver beams of protons and of argon ions.

The argon ions are destined for the NA61/SHINE experiment, which is studying the phenomenon of quark-gluon plasma, a state that is thought to have existed at the very beginning of the universe and in which quarks moved around freely, unconfined by the strong force in protons and neutrons. More specifically, the experiment is studying the transitions between the phase in which quarks are confined and the phase in which they are free. Last Thursday, the NA61/SHINE team recorded first collisions with argon: the argon ions, travelling with a momentum of 150 GeV/c per nucleon, collided with scandium nuclei.

CERN’s accelerators accelerate protons most of the time, but occasionally juggle with other particles. Aside from lead ions and now argon ions, the complex has also accelerated electrons, positrons, antiprotons, deuterons and alpha particles, as well as oxygen, sulphur and indium ions. These particles are either collided with each other or sent to targets to create beams of secondary particles, such as neutrinos. The accelerator complex supplies around twenty experiments studying a wide range of physics phenomena, such as antimatter, exotic nuclei, neutrinos, cosmic rays, the strong interaction and the Higgs boson. Some are looking for signs of physics beyond the current theories or for as yet unknown particles that might help to account for dark matter. They include the four main LHC experiments ALICE, ATLAS, CMS and LHCb, which are the best known and which will be back in action as of the spring. In addition, several dozen experiments are carried out each year at the ISOLDE and n_TOF nuclear physics facilities.