The CAST experiment at CERN announces new limits on the properties of axions, exotic particles that are candidates for dark matter 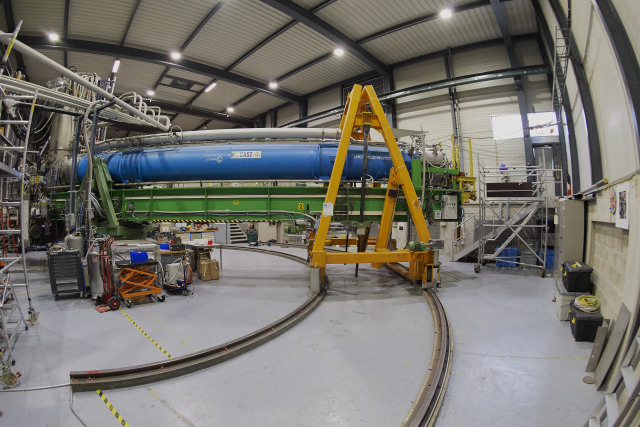 In a paper published today in Nature Physics, the CAST experiment at CERN presented new results on the properties of axions – hypothetical particles that would interact very weakly with ordinary matter and therefore could explain the mysterious dark matter that appears to make up most of the matter in the universe.

Axions were postulated by theorists decades ago, initially to solve an important issue in the Standard Model of particle physics related to the differences between matter and antimatter – the so-called charge-parity violation – that are typical of processes regulated by the weak force, but that haven’t been detected in processes involving the strong force.  The particle was named after a brand of washing detergent, since its existence would allow the theory to be “cleaned up”.

A variety of Earth- and space-based observatories are searching possible locations where axions could be produced, ranging from the inner Earth to the galactic centre and right back to the Big Bang.

The CERN Axion Solar Telescope (CAST) experiment is looking for axions from the sun using a special telescope called a helioscope constructed from a test magnet originally built for the Large Hadron Collider. The 10-metre-long superconducting magnet acts like a viewing tube and is pointed directly at the sun: any solar axions entering the tube would be converted by its strong magnetic field into X-ray photons, which would be detected at either end of the magnet by specialised detectors. Since 2003, the CAST helioscope, mounted on a movable platform, has tracked the movement of the sun for an hour and a half at dawn and an hour and a half at dusk, over several months each year. The detector is aligned with the sun with a precision of about one hundredth of a degree.

In the paper published today, based on data recorded between 2012 and 2015, CAST finds no evidence for solar axions. This has allowed the collaboration to set the best limits to date on the strength of the coupling between axions and photons for all possible axion masses to which CAST is sensitive. “The limits concern a part of the axion parameter space that is still favoured by current theoretical predictions and is very difficult to explore experimentally,” explains the deputy spokesperson for CAST, Igor Garcia Irastorza. “For the first time, we have been able to set limits that are similar to the more restrictive constraints set by astrophysical observations,” he says.

Since 2015, CAST has broadened its research at the low-energy frontier to include searches for other weakly-interacting particles from the dark energy sector, such as “solar chameleons”. The experience gained by CAST over the past 15 years will also help physicists define the detection technologies suitable for a proposed, much larger, next-generation axion helioscope called IAXO.

“Even though we have not been able to observe the ubiquitous axion yet, CAST has surpassed even the sensitivity originally expected, thanks to CERN’s support and unrelenting work by CASTers,” says CAST spokesperson Konstantin Zioutas. “CAST’s results are still a point of reference in our field.”

More information on the results can be found in the scientific paper.