A look back at fifty years of Fermilab’s history, as it celebrates a half-century of scientific achievement today 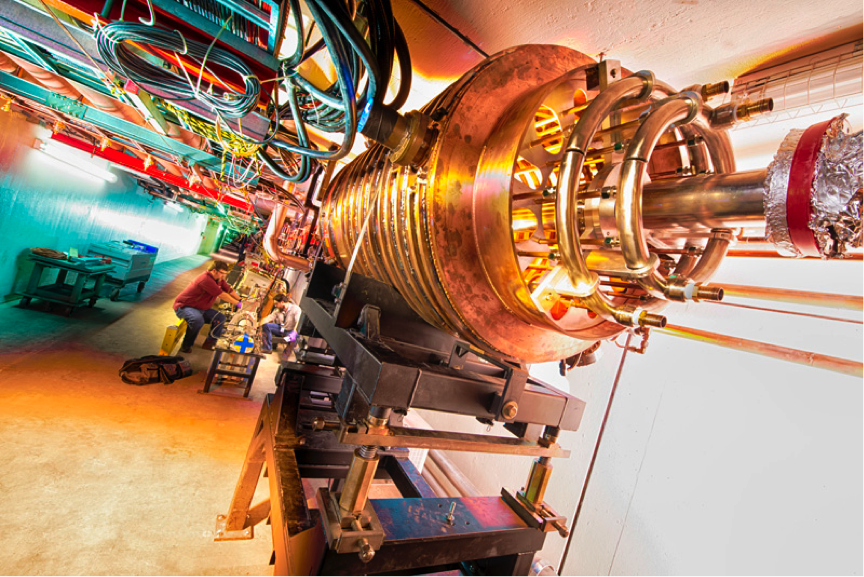 This is an RF Cavity in the Recycler Ring in Fermilab’s Main Injector Tunnel, its most powerful particle accelerator (Image: Reidar Hahn/Fermilab)

Fifty years ago, physicists in the US established a new laboratory and with it a new approach to carrying out frontier research in high-energy physics. It began in the 1960's, when Cornell physicist Robert Rathbun Wilson saw early plans for a new accelerator in the US to rival Brookhaven National Laboratory in New York, and CERN in Switzerland, he considered them too conservative, unimaginative and too expensive. Wilson, being a modest yet proud man, thought he could design a better accelerator for less money and let his thoughts be known. By September 1965, he had proposed an alternative, innovative, less costly (approximately $90 million cheaper than the original) design. It was approved.

This period coincided with the Vietnam war, so the US Congress hoped to contain costs. Yet the discovery of the omega baryon particle at Brookhaven in 1964 meant high-energy physicists felt that a new high-energy accelerator was crucial to exploring new physics. Simultaneously, physicists were expressing frustration with the geographic situation of US high-energy physics facilities.

Against this backdrop arose a major movement to accommodate physicists in the centre of the country and offer more equal access. Columbia University experimental physicist Leon Lederman championed “the truly national laboratory” that would allow any qualifying proposal to be conducted at a national, rather than a regional, facility. In 1965, a consortium of major US research universities, Universities Research Association (URA), Inc., was established to manage and operate the accelerator laboratory for the AEC (and its successor agencies the Energy Research and Development Administration (ERDA) and the Department of Energy (DOE)) and address the need for a more national laboratory.

Following a nationwide competition organised by the National Academy of Sciences, in December 1966 a 6800 acre site in Weston, Illinois, around 50 km west of Chicago, was selected. Another suburban Chicago site, north of Weston in affluent South Barrington, had withdrawn when local residents “feared that the influx of physicists would ‘disturb the moral fibre of their community’”. President Lyndon Johnson signed the bill authorising funding for the National Accelerator Laboratory on 21 November 1967.

“The formation of the Laboratory shall be a positive force…toward open housing…[and] make a real contribution toward providing employment opportunities for minority groups”
Robert Wilson, Director of Fermilab

It wasn’t easy to recruit scientific staff to the new laboratory in open cornfields and farmland with few cultural amenities. That picture lies in stark contrast to today, with the lab encircled by suburban sprawl encouraged by highway construction and development of a high-tech corridor with neighbours including Bell Labs/AT&T and Amoco. Wilson encouraged people to join him in his challenge, promising higher energy and more experimental capability than originally planned. He and his wife, Jane, imbued the new laboratory with enthusiasm and hospitality, just as they had experienced in the isolated setting of wartime-era Los Alamos while Wilson carried out his work on the Manhattan Project.

Wilson and colleagues worked on the social conscience of the laboratory and in March 1968, a time of racial unrest in the US, they released a policy statement on human rights.

They intended to: “seek the achievement of its scientific goals within a framework of equal employment opportunity and of a deep dedication to the fundamental tenets of human rights and dignity…The formation of the Laboratory shall be a positive force…toward open housing…[and] make a real contribution toward providing employment opportunities for minority groups…Special opportunity must be provided to the educationally deprived…to exploit their inherent potential to contribute to and to benefit from the development of our Laboratory. Prejudice has no place in the pursuit of knowledge…It is essential that the Laboratory provide an environment in which both its staff and its visitors can live and work with pride and dignity. In any conflict between technical expediency and human rights we shall stand firmly on the side of human rights. This stand is taken because of, rather than in spite of, a dedication to science.”

The campus brought inner-city youth out to the suburbs for employment, training them for many technical jobs. Congress supported this effort and was pleased to recognise it during the civil-rights movement of the late 1960s. Its affirmative spirit endures today.

By the 1970's experimentalists from Europe and Asia flocked to propose research at the new frontier facility in the US, forging larger collaborations with American colleagues. Its forefront position and philosophy attracted the top physicists of the world, with Russian physicists making news working on the first approved experiment at Fermilab in the height of the Cold War. Congress was pleased and the scientists were overjoyed with more experimental areas than originally planned and with higher energy, as the magnets were improved to attain higher and higher energies within two years. The higher energy in a fixed-target accelerator complex allowed more innovative experiments, in particular enabling the discovery of the bottom quark in 1977.

Superconducting-magnet technology was the future for high-energy physics, and was championed by Wilson, and a new director to take this forward was sought. Lederman, champion of the "national laboratory", spokesperson of the Fermilab study that discovered the bottom quark, and later a Nobel Prize winner for the discovery of the muon, accepted the position in late 1978 and immediately set out to win support for Wilson’s energy doubler - a colliding-beams accelerator, which would employ superconductivity. Experts from Brookhaven and CERN, as well as the former USSR, shared ideas with Fermilab physicists to bring superconducting-magnet technology to fruition at Fermilab. This led to a trailblazing era during which Fermilab’s accelerator complex, now called the Tevatron, would lead the world in high-energy physics experiments.

By 1985 the Tevatron had achieved 800 GeV in fixed-target experiments and 1.6 TeV in colliding-beam experiments, and by the time of its closure in 2011 it had reached 1.96 TeV in the centre of mass – just shy of its original goal of 2 TeV.

Lederman also expanded the laboratory’s mission to include science education, offering programmes to local high-school students and teachers, and in 1980 opened the first children’s centre for employees of any DOE facility. Lederman also reached out to many regions including Latin America and partnered with businesses to support the lab’s research and encourage technology transfer. The latter included Wilson’s early Fermilab initiative of neutron therapy for certain cancers, which later would see Fermilab build the 70–250 MeV proton synchrotron for the Loma Linda Medical Center in California.

Lederman was succeeded by John Peoples, a machine builder and Fermilab experimentalist since 1970, and leader of the Fermilab antiproton source from 1981 to 1985. Peoples saw in the discovery of the top quark in 1995. He had also launched the luminosity-enhancing upgrade to the Tevatron, the Main Injector, in 1999. Peoples stepped down as laboratory director that summer and became director of the Sloan Digital Sky Survey (SDSS) – Fermilab’s first astrophysics experiment.

In 1999, experimentalist and former Fermilab user Michael Witherell of the University of California at Santa Barbara became Fermilab’s fourth director. Mirroring the spirt of US–European competition of the 1960s, this period saw CERN begin construction of the Large Hadron Collider (LHC) to search for the Higgs boson. Accordingly, the luminosity of the Tevatron became a priority, as did discussions about a possible future international linear collider. After launching the Neutrinos at the Main Injector (NuMI) research programme, including sending the underground particle beam off-site to the MINOS detector in Minnesota, Witherell returned to Santa Barbara in 2005. Physicist Piermaria Oddone from Lawrence Berkeley Laboratory became Fermilab’s fifth director in 2005. He pursued the renewal of the Tevatron in order to exploit the intensity frontier and explore new physics with a plan called “Project X”, part of the “Proton Improvement Plan”. A Remote Operations Center in Wilson Hall and a special US Observer agreement allowed Fermilab physicists to co-operate with CERN on LHC research and participate in the CMS experiment. The Higgs boson was duly discovered at CERN in 2012 and Oddone retired the following year.

Under its sixth director, Nigel Lockyer, Fermilab now looks to shine once more through continued exploration of the intensity frontier and understanding the properties of neutrinos. In the next few years, Fermilab’s Long-Baseline Neutrino Facility (LBNF) will send neutrinos to the underground DUNE experiment 1300 km away in South Dakota, prototype detectors for which are currently being built at CERN. Meanwhile, Fermilab’s Short-Baseline Neutrino programme has just taken delivery of the 760 tonne cryostat for its ICARUS experiment after its recent refurbishment at CERN, while a major experiment called Muon g-2 is about to take its first results.

This suite of experiments, with co-operation with CERN and other international labs, puts Fermilab at the leading edge of the intensity frontier and continues Wilson’s dreams of exploration and discovery.

This article is a condensed excerpt from a feature article by Adrienne Kolb, published in The CERN Courier June 2017 issue, which you can read in full here.